Note: The following is a piece written by author Kristi Belcamino in conjunction with her release this Tuesday, May 9th, of her novel City of Angels.  It is a biographical essay, and I'm sure those of you who have already read her spectacular new novel will recognize some marked similarities between Kristi's reminisces and Nikki's story.  And now, you know just what a special story City of Angels is and why it had to be told. 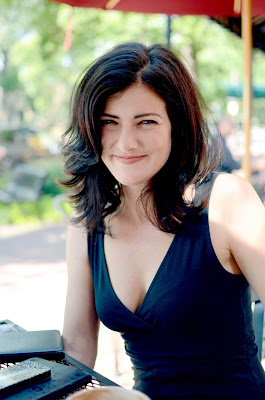 Don’t Ever Forget
By Kristi Belcamino

Most of the homeless people were still asleep, heads propped on folded cardboard boxes pushed up against buildings, bodies swaddled in blankets or rags.

The shadowy streets were chilly, not yet touched by the sun to the west. The downtown Los Angeles streets would remain gray for hours until mid-day when long shafts of sunlight would penetrate the skyscraper fortress.

I walked and walked. My waitressing shift at Little Pedro’s on the border of East L.A. didn’t start until three.  I would have to steel myself to cart beer and sizzling tortilla chips to drunken off-duty LAPD officers. Or put up with finger-snapping businessmen. The only ones who treated me with any respect were the East L.A. gangbangers – none over sixteen, dressed identically in black slacks, pressed white tee-shirts, and dripping diamonds. Served free refills on their sodas by order of the manager.

Far to the north, some eight hours away, I had grown up in a secluded pine-tree filled town overlooking the fertile California valley. Crime was nearly nonexistent. Nobody in Paradise was really rich and nobody was really poor. The popular boys in my high school drove souped-up Mustangs. I don’t remember once seeing a homeless person or a beggar. Definitely didn’t see any gangbangers with diamond rings.

So, when I moved down to L.A. when I was 17, it didn’t take long before I ditched my pink and turquoise-colored clothes and began wearing Doc Marten boots. Combined with dyed black hair and a motorcycle jacket, I didn’t look like anybody’s victim as I trod the streets of L.A.

My home was a ten-by-ten empty box on the fourth-floor of the American Hotel, above a punk rock bar called Al’s Bar that had hosted Nirvana and Jane’s Addiction and Charles Bukowski.

My Los Angeles neighborhood was also the homeless population on Skid Row, the smells, the filth, the litter. The down-and-out artists in the warehouse district. The mentally ill population begging for money in Little Tokyo. The homeless city under the fourth-street bridge.

It was sirens and police and robberies and muggings and break ins. Stolen car radios. Stolen car batteries. After my care was broken into and I couldn’t afford to replace the window in my car, a homeless guy decided to make the backseat of my Dodge hatchback his bed. And then asked me for change when I kicked him out.

Life in downtown Los Angeles was Real Life. With a capital R and capital L. It was a far cry from my college life in Long Beach where I rode on the back of a friend’s Vespa scooter to barhop at beachside cafes.

In downtown L.A., the rose-colored glasses had been broken under my black Doc Marten boot.

As I walked through L.A. in the mornings, I was gathering material. Even then, I was a writer. I would go back to my studio and write about what I saw in downtown L.A. on my portable Brother word processor, the one with the green screen that only showed three lines at a time.

I would write and smoke cigarettes and count my change so I could afford a coffee at the café downstairs and I would tell myself:

I would tell myself:

And then the city exploded.

My neighbors on the fourth-floor of the hotel patrolled the roof with Uzi’s and pistols to defend our building against rioters. Real Life had turned into a Third World Country.

Shortly after, I graduated from college and my boyfriend was discharged from the military. On the heels of the riots and a 7.3 magnitude earthquake that had my brick home rocking, we left L.A., heading for Seattle to chase the grunge scene like so many of our L.A. friends were doing.

Twenty-some years later, I live in a cute little house in Minneapolis. We’re not rich by any means: we drive used cars and are very careful with our money, but compared to the rest of the world, we are extremely wealthy.

It’s easier now to forget, but in the back of my mind I try to remember what Real Life is like for many people.

It is 2012. I have written my first book and my agent is trying to sell it to a publisher. It’s not selling. At least not right away. Instead of writing more books in the Gabriella Giovanni series, she tells me to write something completely different.

I can’t do that, I think. I don’t know how to write another book.

But then I do. Sitting at a sidewalk cafe in downtown Minneapolis, I’m back on city streets, back in a world that once was my life. I remember those many years ago when I reminded myself not to forget. And in that small kernel of inspiration, I realize I have a story to tell. It’s not wholly my story. There are parts of it that I lived and parts of it that I never could have lived, but it is a story I can tell.

So, I sat down and wrote City of Angels. It is the second book I ever wrote and the fifth traditionally published book with my name on it.

It isn’t always an easy book to read, but like all my books, there is always a strong undercurrent of hope. And it deals with real life.