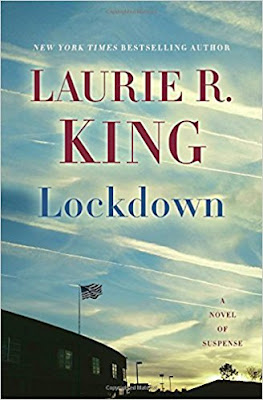 I long ago fell in love with Laurie King's writing through the Mary Russell and Sherlock Holmes series. I have followed her books through other series and her standalones, too, and I've been rewarded with great reading year after year. I was excited to learn that there would be a new standalone, but it seemed quite a departure in subject matter from what I expected. I was right. It was a departure, but a fascinating one that proved me wonderfully wrong about my predictions concerning the big event and its villains and heroes. Of course, there are many different scenarios that could have played out due to so many characters who are hiding secrets from their past and present.

The story is presented in alternating chapters between characters, mostly short chapters, but some are longer, and those that are longer turn out to be just the ones I wanted to be so. At first, I wasn't sure about the switching points of view, afraid that I wasn't getting enough from the characters each time to form a clear picture of them, but after a bit, I realized what a crafty choice those transitions from character to character were, building the total story while building the characters. What seemed like a slow burn began to be a suspenseful progression gaining steam all along.

The story centers around Guadalupe Middle School, an economically depressed and troubled school in the small community of San Felipe, California and the upcoming Career Day, designated as one of new principal Linda McDonald's shining moments for the school to show how far it had come in the last year. But, others have their own agendas for Career Day, and some of those agendas are set on destruction. As the important day approaches and then begins, the stories of Linda, her husband, the school janitor, the local police woman, various students and parents, and members of the community reveal all matter of hidden variables that will play out on Guadalupe's big day. While there is much good going on both visibly and behind the scenes, there is also evil festering with an urgent pulse. And, while much progress has been made with the new principal, the school year has seen the murder of one of the student's teenage sister and the disappearance of one of Guadalupe's students. These events along with the dramas playing out in each character's life form the crisis that will make or break the school and community. Career Day at Guadalupe Middle School turns out nothing like Principal Linda McDonald had envisioned and nothing like I had anticipated.