I am such a fan of time travel in books, but it must be done well.  No sloppy pretense will do.  Lauren Beukes in The Shining Girls does time travel beautifully.  It's a mystery and crime novel on top of that, so what's not to love.  Today's Throw-Back Thursday book is from 2013 and is definitely worth reaching back in time for.  Below is first the book description and then my review. 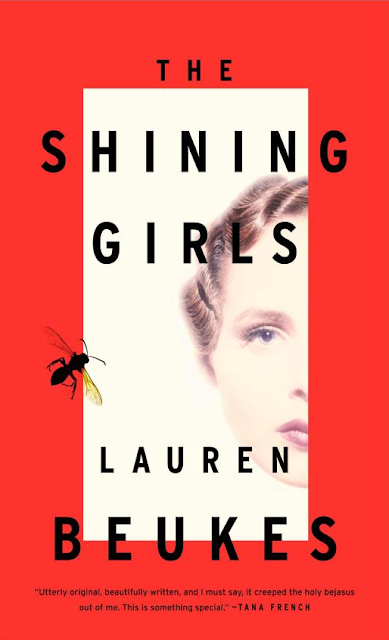 
The girls who wouldn't die hunts the killer who shouldn't exist.

The future is not as loud as war, but it is relentless. It has a terrible fury all its own."

Harper Curtis is a killer who stepped out of the past. Kirby Mazrachi is the girl who was never meant to have a future.

Kirby is the last shining girl, one of the bright young women, burning with potential, whose lives Harper is destined to snuff out after he stumbles on a House in Depression-era Chicago that opens on to other times.

At the urging of the House, Harper inserts himself into the lives of the shining girls, waiting for the perfect moment to strike. He's the ultimate hunter, vanishing into another time after each murder, untraceable-until one of his victims survives.

Determined to bring her would-be killer to justice, Kirby joins the Chicago Sun-Times to work with the ex-homicide reporter, Dan Velasquez, who covered her case. Soon Kirby finds herself closing in on the impossible truth . . .
The Shining Girls is a masterful twist on the serial killer tale: a violent quantum leap featuring a memorable and appealing heroine in pursuit of a deadly criminal.

We know who the killer is. We know who the victims are. We know who the lone survivor is. We know all of this information fairly quickly. What we don't know is if the killer will ever be caught or if the survivor will remain so. Of course, there is a complication for the police and the survivor. The killer is a time traveler, using a ramshackle house in the depression era 1930's to find his way to and from the future. The house is itself alive with its urges to kill that must be obeyed by the depraved man who stumbles upon the evil and who is more than compliant in his devotion to carrying out the nefarious deeds. Harper Curtis has chanced upon his soul mate in the form of the grotesque dwelling. Kirby Mazrachi is trying to ferret out her would-be killer whom she doesn't realize leaped from 1931 to 1989 to stalk her and strike her down. To Curtis, she is simply one of his "shining girls," one of nine predestined to die.

For Kirby, it is 1993, and she has taken an internship at the Chicago Sun-Times with Dan Velasquez, sports reporter, but formerly homicide reporter who covered her case. Her placement with Dan is deliberate on her part, as she is attempting to uncover any information about her case. Her goal is to expose her attacker and link him to at least one previous murder. Kirby detects a pattern, but she is unable to support it with evidence. She enlists Dan's aid in digging through materials, both old and new, connected to her attach and similar murders. Is it possible to make sense of the implausible, to even arrive at its connection to reality? To stay alive, Kirby will have to entertain her wildest thoughts as the key to catching a ruthless, elusive killer.

Lauren Beukes has written a brilliant novel, a full-on creepy novel that will shock you with brutality, but at the same time, it will spellbind you with the suspenseful genius of a story you cannot read fast enough. In fairness, the brutality is brief in its telling, but knives are always a particulary grisly method of death. Beukes achieves the back and forth of the time traveling with deftness and intrigue. As a fan of time travel, I am impressed with her ability to create a story that flowed so smoothly with so many different time frames involved. I feel certain that this book will be short-listed for several awards and included on many summer's hottest reads lists.