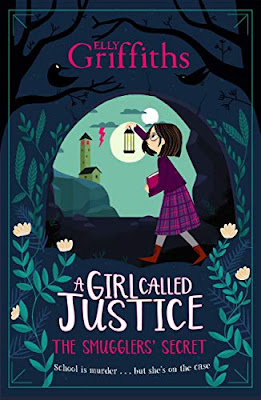 Justice Jones: Secrets of Smuggler’s Inn is the second book in Elly Griffiths’ Justice Jones children’s mystery series. Yes, that Elly Griffiths, the brilliant author of the Ruth Galloway series, the Stephens and Mephisto (the Brighton) series, and the Harbinder Kaur series that have been on mystery/crime best selling and award lists for years. Now, with this children’s series, which is also a great read for adults, the author has given children and young adults a jump start on reading great mystery stories.

I got the same sense of thrilling suspense from reading both Justice Jones books as I did reading The Westing Game, my favorite young adult mystery up until now. I can’t imagine any better books to instill the love of mysteries in a young reader than Griffiths’ new adventures. While set in England in 1937, they are completely relatable, as the only effect seems to be no cell phones, which would be all the rage for pre-teens and teens now. I find that a refreshing absence, and I think all readers of this series will, too. A dropped note is far more thrilling than a text message, any day or creepy night of the week.

Justice Jones has returned for her second term at Highbury House Boarding School for the Daughters of Gentlefolk. Although Justice would rather stay with her barrister father in their London house, she has the advantage of entering the spring term with some established friends and an understanding of the rules, which of course doesn’t keep her from breaking them. Justice’s two best friends are Stella, who is a roommate in her pod of five girls, and Dorothy, who is a maid at the school. Dorothy is only three years older than Justice’s twelve years and is as big a fan of mysteries and investigating them as Justice is. Stella, although not as enthusiastic about sneaking around trying to solve a mystery when it occurs, does support Justice in her curiosity. And, of course, there are mysteries aplenty this term, starting with the new matron, Miss Robinson, who doesn’t seem to recognize a broken bone when she sees one.

The headmistress, Miss de Verre, has decided the 2nd Levels class should volunteer in the village community this term, and Justice has been assigned to help an older gentleman named Mr. Arthur, who lives in Smugglers’ Lodge. Of course, Smugglers’ Lodge is rumored to be haunted. Mr. Arthur is blind and at first he just wants Justice to read the papers to him, but they develop a friendship and start using their one afternoon a week together to talk. He requests a favor of Justice, and it is one she jumps at the chance of undertaking, as it involves a mystery, and Justice is all about the mystery. Mr. Arthur is trying to connect with his adult daughter with whom he lost contact years ago, and he thinks she might be at Highbury. Justice is delighted to start investigating who it could be, and it coincides nicely with Justice’s puzzlement of why Miss Robinson is sneaking around at night and why the forbidden basement at Highbury seems to be attracting certain teachers’ interests.

To reveal anymore of the story would rob readers of the same pleasures of discovery I had, and I never want to do that. I can add that there is a murder, which shouldn’t be too surprising. There’s a new Games Master, Miss Heron, and, Justice finds out she’s not hopeless at athletic activities, although she still and forever hates lacrosse, and Justice discovers other abilities she has, outside of being an ace detective. Justice shows lots of growth in this book, with a nod to the future of a well-balanced person and productive adult. She is a highly likeable character, and how she handles the challenges she faces endears her to the readers even more.

So, if hidden tunnels and disorienting fog and secrets around every corner and people who go bump in the night catch your interests, this second Justice Jones book is right up your mystery alley. Did I mention towers with mysterious lights? As a delightful bonus to it all is an inclusion of the blueprint of the Highbury House and a list of the cast of characters. This bundle of thrilling mystery is bound together in a cover (both books) that can only be described as a work of art. Share this series with your children or grandchildren but be sure to buy a copy for yourself. I do.