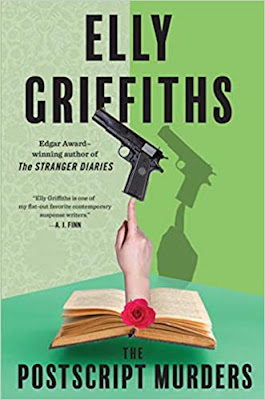 The popularity and appeal of the older, sagacious female sleuths or mystery solving figures has always been a much-loved part of the mystery/crime genre. Agatha Christie’s Miss Marple was my first favorite amateur detective. Murder She Wrote continued giving credence to the reliability of the older woman sleuth in its lead role, Jessica Fletcher. Most recently, Richard Osman’s book The Thursday Murder Club centers around a group of septuagenarian sleuths, equal parts women and men, who are up to the task of resolving the question of whodunit. And, now one of my favorite contemporary authors Elly Griffiths in her novel The Postscript Murders gives us the character of Peggy Smith, who is known as the “murder consultant” by mystery authors who are having plot problems.

It’s a unique twist though, because the aged murder expert has herself been murdered, and the plot leading up to it must be discovered. It is up to Peggy’s Shoreham-by-Sea friends, who include 80 year old Edwin, Peggy’s care worker Natalka, and coffee shack owner Benedict to piece together what they realize is anything but a natural death. Finding a postcard in Peggy’s desk with the threatening message of “We are coming for you” seals the deal for the friends in determining that it’s murder that has brought about Peggy’s demise.

The Postscript Murders opens to a still living Peggy writing in her observation journal with what she is seeing one day out of her seaside view window. There are two men she is watching who seem to be out of place in the neighborhood. Peggy lives in a retirement home, Seaview, but she’s still as sharp as ever, even at 90. However, she has reached the point in life where she must have a care worker come in and do certain basic services for her. When the care worker Natalka arrives for her afternoon duties on this particular day, she finds Peggy sitting in her chair by the window, dead. Nothing seems out of place, and Natalka calls her supervisor to report the death, thinking the death was just a case of Peggy’s advanced age. Then, Natalka begins to look around Peggy’s desk. Finding the postcard with the sinister message and encountering a masked gunman when she and Benedict are sorting through Peggy’s books puts a whole new spin on the murder consultant’s death.

DS Harbinder Kaur, last seen in The Stranger Diaries, returns in The Postscript Murders to the delight of Elly Griffiths’ readers. Although in her thirties, Harbinder still lives with her parents, but readers get a closer look in this book at the dynamics of the Kaur family, showing how it’s possible for this arrangement to work well for everyone. Natalka takes her suspicions about Peggy’s death to the Detective Sergeant, and it isn’t long until Harbinder is investigating what really brought about the elderly woman’s death. When one of the authors Peggy helped is also found dead, of a gunshot, the group of friends is off running, as far as to Aberdeen to a Literary Festival, to find answers. Harbinder, while working with Peggy’s friends, is trying to keep police procedure at the forefront of her investigation. The friends, not so much.

The story is told from the multiple viewpoints of Harbinder, Natalka, Edwin, and Benedict. Elly Griffiths is brilliant at character development, and we come to know these characters through their separate narrations. It seems Natalka has the most secrets in the group, but she has some rather stiff (ouch) competition from the dead Peggy. And, although murder is a serious business, there is humor in the telling, too, especially in parts dealing with Harbinder’s family and her police partner Neil, whom Harbinder often compares to a squirrel. Readers can always count on Elly Griffiths to provide the most captivating characters, ones generating an emotionally vested interest with the reader. And while the characters do drive this story, the mystery itself is always at the center of the action.

With this second book featuring Harbinder Kaur, we know have been gifted with three separate outstanding series from Elly Griffiths. Her first series, the Ruth Galloway series, has a special place in my reading heart, and her Stephens and Mephisto series never fails to intrigue me. Of course, this prolific author even has a children’s series, too. Justice Jones has two books so far, and I am absolutely charmed by it. The Postscript Murders has solidified the Harbinder Kaur series as another one to mark on your calendars for a yearly thrill.

Thanks to Quercus and Net Galley for an advanced copy of The Postscript Murders. 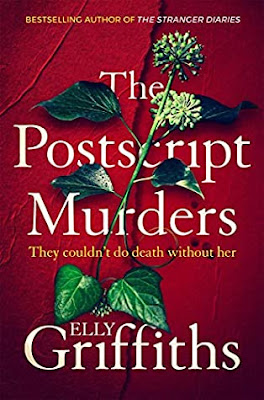