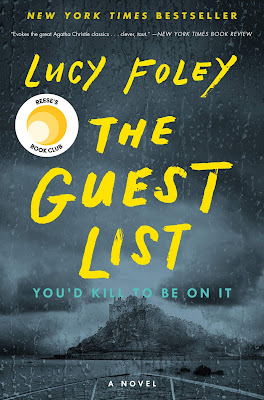 I am a big fan of the locked room mystery scenario, which extends itself to the isolated island mystery. Of course, the most well-known isolated island mystery is Agatha Christie’s And Then There Were None, a story that gets chilling fast. More recently, Rachel Howzell Hall’s gripping They All Fall Down presented an island of select invitees to a gathering of deadly consequences. And, now I have another favorite in this remote island setting where once again the secrets the guests carry lead to murder. The Guest List by Lucy Foley is an outstanding addition to the locked room/remote island collection.

Will Slater and Julia/Jules Keegan are a golden couple, rising stars in their respective worlds of television and magazine publishing. So, Jules knows that the setting for their wedding must be special, unique and unforgettable. After an only-the-unique-apply search for a venue, she awards the prize wedding to a wedding planner who offers the distinctive location of a remote island off the Irish coast. The island contains a recently restored stone house with ten bedrooms, so the wedding party can all stay overnight after the rehearsal dinner and before the next day’s big wedding. Aoife, the wedding planner, and her husband Freddy, the chef, will need to make sure everything is perfect for Jules’ dream wedding, as she will accept nothing less. Jules is happy to have gotten a huge discount on the venue and services because it is the first wedding being held there, and Jules also agreed to feature it in her magazine. Will, who is the star of the "Survive the Night" television series, is pleased that the outdoor wedding at the ruins of the island’s small church will jive with his outdoors image he projects to the public.

The wedding party contains the ushers, all in their thirties, who were at school with Will at Trevellyan’s, an all-boys school where Will’s father was headmaster. The wedding seems to take them back to their youth, which isn’t necessarily a good thing for the wedding. The best man, Johnno, is especially a reminder of something Will wants left in the past. Jules has a lone bridesmaid, her half-sister Olivia, who brings her problems of a bad breakup with her and causes Jules to be even more irritated with her sister than usual. The bright spot for Jules is her long-time friend Charlie, who is to be the master of ceremonies. His wife, Hannah, who is largely left on her own by Charlie, develops a friendship with Olivia, as Hannah understands what a bad ending to a relationship can do to someone. But, there is so much hidden and buried within the characters, secrets that need to be told, but secrets that can have dire consequences. It’s a weekend of Russian roulette in never knowing when or if a secret will explode. And, the biggest secret of all is who has been murdered, a clever departure from the normal order, and the reader doesn’t discover who the victim is until late into the story. Trying to guess the identities of both the murdered and the murderer is quite fun, as those secrets of so many make it challenging.

Lucy Foley has created a character driven tale that has layer after layer peeled back to reveal the horrors of lives ruined and lives interrupted. The characters are so well fleshed out in the narrative due largely to the story being told by five of those characters—Aoife, Hannah, Olivia, Johnno, and Jules. Through their narrations, the reader gains not only a great insight to those characters, but also to the other supporting cast. The secrets run deep, and once they start unraveling, they are gasp worthy. The big twist that comes at the end is a shocker. Foley has paced this story well to accelerate the suspense at just the right moments. The revelations come forth with stunning impact, and the reader will be caught off guard more than once. I think this is Foley’s best book yet.