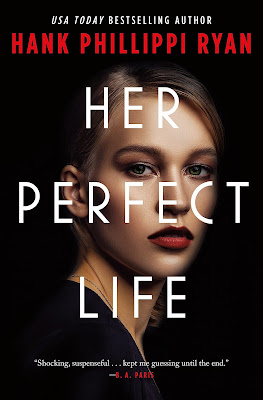 I’ve been a fan and reviewer of Hank Phillippi Ryan’s books for a long time, and not once has she let me down.  Her books are always thrilling, twisty, riveting, and intense.  Her Perfect Life continues in the tradition of her other stand-alones, too, with a title that has many applications throughout the book.  It’s one of the things I most love about Ryan’s books, the titles that morph into areas you don’t expect.

Lily Atwood is a high-profile television reporter, whose stories have earned her Emmys.  She is in her early thirties, has an adorable seven-year-old daughter, a fantastic and well-paying job, a large following on Instagram, an amazing nanny, a beautiful home, and an ace producer.  Oh, and she’s beautiful.  Sounds perfect, right?  Well, Lily also has a secret that could destroy her perfect life.  Her older sister Cassie went missing twenty-five years ago from college, and there were rumors of Cassie being involved in some illegal activities.   Although Lily has tried to find Cassie over the years, Lily is fearful that if her sister is indeed still alive and reappears, it could destroy Lily’s carefully maintained persona of perfection, thus bringing life as Lily knows it to a screeching halt.

Greer is Lily’s producer and assistant at the news station where Lily has soared to the spotlight.  She doesn’t let on to Lily, but Greer has been building up resentment at doing so much work and Lily always getting the credit.  Greer also feels shut out on a personal level by Lily.  There’s no idle, friendly chit-chat between them, no camaraderie of sharing their lives.  Lily has put up a wall that Greer can’t get past.  Lily’s reasons for keeping to herself have to do with wanting to keep her world intact.  And, Greer knows all too well that her job security depends on keeping Lily happy and successful.

News reporters get lots of tips and information from the public about possible newsworthy stories.  Sometimes, a source wants to remain anonymous.  Lily has such a source who has recently given her and Greer some great tips to work on and resulted in major splashes in the Boston area. The man has been nicknamed the generic Mr. Smith by the two women, and when Smith calls, Lily listens.  But, Smith’s calls have started taking a personal turn, with him relaying information to Lily about her own life, information he has no reason to know.  When he also starts calling Greer behind Lily’s back, the action really heats up.  It’s a whirlwind of misinformation, betrayal, and revenge.  When Mr. Smith finally reveals himself to Lily and Greer, this whirlwind becomes a twister.

The story unfolds as the narration changes from Lily to Greer to Cassie.  I’m a fan of the multiple perspectives in telling a story.  The reader gets a more complete picture of events than with just one narrator.  The author did an outstanding job of each of the three characters bringing their unique perspective to the table.  It also shows that a lot of bad choices are made by these three, and lives were marred by those missteps.

Speaking of characters, the characters are, as always in a Hank Phillippi Ryan book, well-developed, with layers of secrets and challenges, but I have to admit that I was a bit conflicted about who was the most admirable, or who had legitimate issues that were ignored.   Maybe, we are supposed to feel that way.  Lily is a character who I consider a “good” person, but she seems too closed-off emotionally to be a “healthy” person.  She herself talks about not wanting to get close to anyone or have friends, but in a successful team situation, I find her approach wrong-ended.  I know she lost her sister Cassie at a young age and was disappointed in her affair with a married man (except for the result of her daughter Rowan) and uses both as excuses to shut herself off, but being uncaring about the people in your life comes off as cold.  I didn’t really like Lily.  I sympathized with Greer, her assistant more than maybe I was supposed to, but anyone who’s ever been on the receiving end of the “talent” getting all the accolades understands Greer’s resentment, if not her actions.  Acknowledgement of the work you do for someone can be a crushing blow when not given.  Added to that Lily’s cold shoulder personally, I’d say Greer had a reason to resent her.  Cassie was the character who gets my vote as the likeable one, the one to be admired.  Her actions were from a pure place, a selfless core to her being.  I would pass on a dinner with either Lily or Greer, but I would enjoy chatting with Cassie.  The “bad” guys in the book were well played, and there are some definite great twists there.

Her Perfect Life is another success for Hank Phillippi Ryan.  Ryan’s writing is as well-honed and detailed as always.  I enjoyed the suspense and surprises that came with it, and I’m sure other readers will too.

I received an advanced copy of Her Perfect Life from NetGalley and Macmillan-Tor/Forge Books, and the above is my honest opinion.