The Night She Disappeared by Lisa Jewell: Reading Room Review 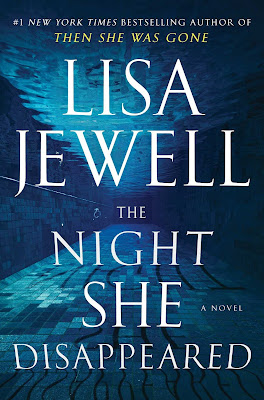 Lisa Jewell consistently writes books I love to read. The first book I read of hers was Watching You, and this book, The Night She Disappeared is my 5th book by this now favorite author. All books I’ve read thus far have been riveting reads, but I have to say this new one, The Night She Disappeared, has catapulted to the top of the list as my favorite. It’s a book you want to read nonstop until the end, but it’s also a book you don’t want to end.

Tallulah Murphy is a nineteen year old teen mother in 2017, living with her mother, raising her baby boy, and going to college. The baby’s father has recently come to live with them, and Zach seems to finally be taking to fatherhood now, helping with Noah and working to save money for a place of their own. Tallulah’s mom, Kim, helps it all work, too. Kim has always held her family together, providing for and nurturing Tallulah and her brother Ryan after their father left them.

Kim is happy that Tallulah and Zach and Noah seem on a good path to self-sufficiency. On a warm summer night in June, Kim babysits Noah as Tallulah and Zach go out to the local pub for dinner and a celebration of sorts, an evening Kim suspects might end in a proposal. But, when the teenagers don’t return by the next morning, Kim knows that something is very wrong. After asking around, she discovers that the two accompanied some other young people their age from the pub to a girl’s house. Kim goes to the house, which turns out to be a monstrosity of opulent excess in the woods, but the girl named Scarlett and her mother say that Lula (what friends call her) and Zach left the party together in the late hours. When Kim runs out of people to question, she reports her daughter and Zach as missing to the Upfield Common police. An investigation is opened, but even after a search of the woods, the question of where the couple disappeared to is still wide open.

A year later, there’s a new headmaster at Maypole School, the exclusive boarding school located in Upfield Common for affluent students needing a second chance after flunking their GCSEs and their A levels. Shaun, the new headmaster and his girlfriend Sophie move into the headmaster’s cottage, which is on the edge of the school grounds and by the woods. These are the same woods that run by Scarlett’s house and were searched, without result, when Tallulah and Zach were reported missing.

Sophie is an author of a cozy detective mystery series, and thus, she is intrigued when she comes upon a handwritten sign posted on the fence at the end of their cottage grounds that reads, “Dig Here.” At first, she ignores it, but after a couple of days, she at last gives in and digs. What she finds draws her into the mystery of the missing teens and leads to a meeting with Kim. It would seem someone knows something, and Sophie and Kim become determined to find out who it is and what they know.

The dual timelines, 2017 and 2018, of then and now, the year of the disappearance and a year later, reveal the story to the reader through different perspectives. There is also a 2016 timeline, which I call Tallulah's truth, as gives the readers their insight into Tallulah’s life and feelings leading up to Zach moving in with her. 2016 gives some vital information of what is honestly going on with Tallulah, not just what her mom Kim thinks, and it makes Tallulah’s character the most developed in the book. The alternating timelines are well balanced and give nothing about the ending away at all. It’s still a gobsmacking answer what happened to Tallulah and Zach.

Like the darkness slowly creeping across your lawn at dusk, this book’s pacing brings on the darkness bit by bit of two people disappearing without a trace. While some might consider the pace somewhat slow, I thought it was just right. A slow pace for sure, but one that unfolds the clues and backstory with a slow burn, a burn that explodes at the perfect moment. There’s a feeling that something big is lurking just around the corner, and I found that thrilling. The book is 465 pages, but I can’t think of anything that should have been left out. Even the epilogue served a purpose, but you might need to think carefully about why it's added and what it reveals. I actually read the epilogue twice, one more time after I'd calmed down from the fever of finishing the book.

From the creepy crawly prologue about arachnophobia and the dark to the breathtaking end, The Night She Disappeared is page after page a mesmerizing story. It is high on my list of favorite reads for 2021, and I think it is Lisa Jewel’s best book to date.