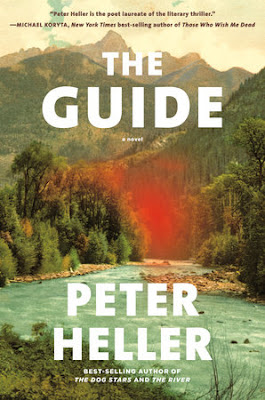 Peter Heller. Where to begin? This man/author has a bio page on his web site that reads like a book series about an outdoor adventurer and warrior who loves the natural world and its inhabitants (not man) and is willing to die for them. Luckily, Heller has authored non-fiction books about these daring undertakings. Titles include Hell or High Water: Surviving Tibet’s Tsangpo River; The Whale Warriors: The Battle at the Bottom of the World to Save the Planet’s Largest Mammals; and Kook: What Surfing Taught Me about Love, Life, and Catching the Perfect Wave.

I must include a smidgen of excerpt from his bio page because I was absolutely fascinated by his accomplishments. I am including three excerpts together as a means of saving space, but I encourage readers to go to Peter Heller’s web site and read the entire bio. So, here goes:

“He traveled the world as an expedition kayaker, writing about challenging descents in the Pamirs, the Tien Shan mountains, the Caucuses, Central America and Peru. He was the first man, with a Kiwi paddler named Roy Bailey, to kayak the Muk Su River in the High Pamirs of Tadjikistan. The river was known as the Everest of Rivers in the Soviet Union, and the last team that had attempted it lost five of their eleven men. The run was 17 days of massive whitewater through a canyon inhabited by wolves and snow leopards.” Then, “In December, 2005, on assignment for National Geographic Adventure, he joined the crew of an eco-pirate ship belonging to the radical environmental group the Sea Shepherd Conservation Society as it sailed to Antarctica to hunt down and disrupt the Japanese whaling fleet.” And, “In the fall of 2007 Heller was invited by the team who made the acclaimed film The Cove to accompany them in a clandestine filming mission into the guarded dolphin-killing cove in Taiji, Japan.”

Peter Heller’s first fiction book is one most readers will be familiar with, the highly acclaimed Dog Stars. This debut gathered a boat load of awards, including New York Times Best Seller’s List, An Amazon Best Book of 2012, A Publishers Weekly Best Book of 2012, An Oprah Books Club Pick, and An NPR First Read. Its subject matter was a flu mutation that had wiped out 99% of the population. And now The Guide is set in the third year of an actual pandemic. Seems rather prescient, doesn’t it. Following The Dog Stars were The Painter, Celine, and The River. It’s in The River that readers are first introduced to the character of Jack, who is the main character of The Guide. There are allusions in The Guide made to what happens in The River, but the author handled it with great finesse so that readers can go back and read the previous book and enjoy the full tale. And, The Guide stands alone from reading The River. The reader is clued into the death of his best friend in The River and its devastating impact of Jack, but that’s all you need to know for the story of The Guide.

I can’t imagine the first description of this book that would come to a reader’s mind would be pandemic book, and, yet it is indeed a book that has the pandemic at its core. In this story, our country is in the third year of dealing with the COVID virus, which is in itself a bit of a shock, while at the same time you realize it’s not so unexpected. The virus seems to be quasi-controlled at this point, but there is vigilance about outbreaks and mutations, and some areas are better off than others. The fishing resort in Colorado where Jack has just signed on to be a fishing guide prides itself in its guaranteed COVID-free status.

And, so we arrive at The Guide and twenty-six year old Jack coming on the scene at Kingfisher Lodge as its newest fishing guide. Jack is replacing a guide who had to suddenly leave on a family emergency. While this particular resort is new to Jack, being a fishing guide is not. He has taken a break from ranching with his father in Colorado before to spend a few months revitalizing himself, trying to mend the broken parts of him. Most recently, he is suffering the emotional toll of having lost his best friend. The river and the fishing are resources of soul-soothing escape and renewal for Jack. King Fisher Lodge is located on what is referred to as Billionaires’ Mile along a pristine river, a highly prized area for its fishing and scenery that only the very rich can afford to book. When met by the resort’s manager, Kurt Jensen, at the cabin where Jack will reside, Jack is reminded of the non-negotiable rules by which guides must abide. One such rule is the forbiddance of going beyond a certain point on the river that adjoins a crusty old neighbor’s property, a man who doesn’t tolerate trespassing and will show his disdain with a shotgun. But, the river promises great trout fishing, and Jack isn’t too concerned about the inflexible rules. He is here to fish and read and hopefully heal his soul a bit.

The rich client whom Jack will take fishing every day, or every day she wants, turns out to be a famous singer, but she’s no lazy loafer on vacation. Jack is on call to carry her gear, help her with her line, and hopefully help her catch lots of trout, but Alison proves herself an experienced fisher, having grown up in North Carolina and fished her whole life. She experiences the same moments of Zen that Jack does in fishing, and she likes to hold the fish in her hands before releasing it back into the river, a connection of kindred spirits to her.

Jack and Allison develop an easy friendship, enjoying each other’s company fishing and otherwise. Everything is designed for comfort and ease at the Kingfisher Lodge, and even the cameras at the bridge crossing the river don’t seem too alarming at first. But, Jack and Alison, who have become a team of sorts, start noticing that something is off. Some of the other guests don’t seem all that interested in fishing and at times appear disoriented. There’s barbed wire topping the fences of the neighboring property that extends across the river, an illegal act.  Jack and Alison both hear what sounds like a scream at night, and although they both agree that it could have been an owl, neither one believes it was an owl. And, there’s that single wading boot sticking out of the disturbed ground cover on the cranky neighbor’s side of the fence that doesn’t sit right with Jack. These occurrences are just the tip of the proverbial iceberg.

Peter Heller does so many things well in this book. He gives substantive information showing a clear picture of where Jack and Alison stand on mores and values, incorporating their backgrounds and present-day actions into a well-filled sense of who they are. Heller manages to blend the character of Jack as a graduate of Dartmouth, an avid reader his whole life (he had me at avid reader), a hard worker on his father’s ranch, a stunningly expert fly fisher, a compassionate person, and a warrior for justice. Alison’s background of growing up in North Carolina gives a grounding to her current life as a celebrity. I appreciated Heller making her an outstanding fly fisher, too, and a person with a good head on her shoulders, unfazed by a challenge.

The suspense is fueled by small discoveries and occurrences, building to the unthinkable discovery that is all too possible of mankind. Heller is brilliant at adding the small recognitions that keep adding up to the knowledge that something is terribly wrong in this $20,000 a week paradise. I found his pacing to be right on track. Some might think it a bit slow at first, but I think it was purposefully so to establish the façade of the peacefulness and perfectness of the elite fishing lodge. The pacing picks up and throws the reader into full suspense mode when Jack and Alison realize clue by clue that there is a dark secret operating right in front of them. Readers will be drawn to the idyllic setting of the river and the mountains, but the juxtaposition of a sinister setting behind the idyllic is all the more nightmarish because of the contrast.

One of my favorite aspects of The Guide was the feeling of authenticity I sensed on every single page. Reading Peter Heller’s background explains why that feeling of authenticity is so strong. He has lived the life of a fishing guide, one of his many lives, and his home is in Colorado, where the story takes place. Heller’s description of the river and the surrounding land and mountains reflects his own close relationship to nature in a poetic intimacy. This is thankfully no John Steinbeck rambling of place; it is a mellifluous work of words that soothe and comfort you. The reader is at times able to step outside of the problems of his world and the book’s to be bathed in a light of peaceful purity.

Here’s the thing about The Guide and Peter Heller. I am smitten with Peter Heller and his writing.  I am excited to write a review of this book and to learn more about both Peter Heller’s fiction books and his non-fiction books, which follow his journeys. Nothing is dearer to a reader than the excitement of a new author and a feeling of connection to his/her writing. After reading The Guide and learning more about Peter Heller, I want to read all his books, fiction and non-fiction. I want to see through his words the breathtaking sights he has encountered and be touched by the incredible storytelling he combines with his respect and love for nature. I am so glad I have more of it to explore.