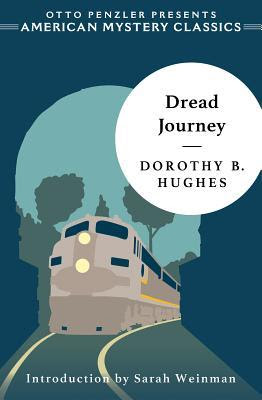 I love mysteries set on a train, and I especially love those train mysteries to be set in the 1930s or 40s. Mix in some golden days of Hollywood when there were “movie stars,” not actresses and actors, and you have a setup for some high drama. Dread Journey by Dorothy B. Hughes contains these elements and all the accoutrements that go with them, from cocktail hour to black satin dresses. Over-the-top is the norm, as evident when one of the characters is ordering steak for dinner, wanting only "the best." Think The Great Gatsby on a train, and Jay Gatsby throwing his shirts in the air as Daisy looks on at how splendidly beautiful the “best” shirts were. As the darkness behind the glamorous society facade is revealed in Fitzgerald’s book, the darkness of celebrity fame is exposed in Hughes’ book. All the cocktails on the luxury Pullman car on The Chief cross-country train can’t dull the sound of masks cracking and dreams dying.

Kitten Agnew is a movie star. She has proved her worth as a box office draw, and she will not be dismissed as yesterday’s news. On a cross-country train trip from Los Angles to Chicago and then on to NYC, Kitten is in a fight for her career and, ultimately, her life. The role of her career, the goal of her life, is to play Clavdia Chaucat in an adaptation of Thomas Mann’s The Magic Mountain. Vivien Spender, the producer/director who found Kitten and made her into a star, has been, since he found her, grooming her to play this part in the movie he will produce, his magnus opus. But now, Vivien has found a new Clavdia, a fresh face to mold into his image of Clavdia. However, Kitten has an iron-clad contract with Vivien and won’t step aside. She was not the first beautiful girl to catch Viv’s eye and then later be discarded when he grew tired of them, so Kitten made sure her contract could not be broken.

The train trip to New York City is set up by Viv under the ruse of going there for the premiere of Kitten’s new movie. At the last minute, his intentions become clear to Kitten, as he forces her to share a room on the train with his new ingenue, Gratia Shawn. There’s no discussion about it because Kitten and Viv aren’t talking to one another by then. Kitten has threatened Viv with a lawsuit, one which he will lose because of her iron-clad contract. He has offered her a million dollars to give in, but Katherine “Kitten” Agnew will not go away: she alone will play Clavdia. With a stalemate existing between them, Kitten has an overriding fear when the train trip begins of what Vivien Spender has in store for her. “She was afraid. It wasn’t a tremble of fear. It was a dark hood hanging over her head. She was meant to die. That was why she was on the Chief speeding eastward. This was her bier.”

Vivien Spender had hoped to keep his new girl under wraps until New York, but Kitten knows Leslie Augustin, famous band leader and singer, who is also in their car, and drinks in Leslie’s room gives way to Gratia joining them. Journalist Hank Cavanaugh is also in Leslie’s room and working his way to his preferred state of drunkenness. So, a foursome of sorts is formed for drinks and dinner and whiling away the many hours on the train, exposing Gratia’s beauty to the public ahead of the plan. Kitten is glad of the companionship, as she is trying to ensure Viv doesn’t get her alone to try and eliminate her. Hank learns of Kitten’s trepidations about Viv, and he feels he might at least do something useful in life by saving her. Hank and Kitten have one of the longest conversations in the book, with Kitten in a completely honest moment in her wondering about dying and heaven and hell. The train speeds on, and the small world of the luxury car on the Chief train gets closer to its final act. The atmosphere is tense, and the suspense builds steadily with each chuga chuga chuga of the wheels. Can murder be averted, or is it the end of the line for Kitten?

Dread Journey is an ensemble piece, with each character is the cast receiving their solos where their thoughts and dialogue reveal themselves. Well, fresh-faced Gratia is the exception. Her character seems to be shaped by what others think and say about her rather than inner reflection or problem-solving thoughts of a deeper nature. A smattering of short outbursts of dialogue from her are her attempt to make her position clear. And, it is Gratia who uses the word “woke” to describe herself at the end, which may be the most important thing she utters. There’s no doubt as to what Kitten Agnew, Vivien Spender, popular band leader Leslie Augustin, burned-out journalist Hank Cavanaugh, or Viv’s loyal and long-suffering assistant Mike Dana, and the failed script writer Sidney Pringle are in torment about. They desperately want to find the happy ending but are afraid that one doesn’t exist, except for Viv, as his narcissism can only imagine scenarios with him succeeding. While Viv was the character I liked the least, it was quite interesting to learn through his thoughts how clever he thinks he is, his overblown confidence in there only being one right answer to anything, what he wants. Shades of Harry Weinstein are easily conjured up as we learn what the price of being a Vivien Spender star is. The Pullman porter, James Cobbett, has some deep reflections and thoughts about his passengers upon which he lingers, but James knows contentment, and, thus, he is separate from the other characters in the ensemble. Through James’ separateness, the reader has insight into the other characters as he watches them from his seat in the car or serves them. They often have their masks down in front of James, so the reader benefits from James’ invisibility to his passengers.

This book falls squarely in the noir tradition of the 1940s and 50s noir fiction, and Dorothy B. Hughes is a revered noir writer of the 40s. All the characters struggle with a world that has disappointed them and shown them things they cannot reconcile into a happy existence. Kitten, Vivien, Leslie, Hank, Mike, and somewhat less Gratia. They all are floundering in a world of broken dreams that lead to despair. Classic noir presents that the American dream is not actually an attainable goal, trying to find meaning in a meaningless world. Otto Penzler, who is the publisher of this edition of Dread Journey, states that “the lost characters in noir … are caught in the inescapable prisons of their own construction.” Rather a you-have-nobody-to-blame-but-yourself judgement, but in defense of the character’s blame, the existential state of fate does hang heavy. There’s a darkness of theme and atmosphere, which is personified by so much happening in the dark hours of the journey, like a living, breathing entity hovering to pounce. There’s the sexual tension between Hank and Gratia, Leslie and Gratia, and the sexual seductive postures of Kitten and the sexual predatory expectations of Vivien. And, there’s the dialogue of noir, mostly short and abrupt, often with a dramatic flair. The dialogue between the characters in Dread Journey is always on the edge of despondency. The unhappy ending seals the noir deal, and that shouldn’t be a spoiler for readers. Most people wouldn’t expect this setup to end anything but badly.

I am so glad that I picked out this Dorothy B. Hughes book to read in the classic crime fiction being reprinted. It was a wonderfully suspenseful tale and well written. The closed setting of the train amps up the excitement tenfold. That it is a dark tale doesn’t mean it’s a depressing one, well not in the sense of the reader being disappointed. It’s a fascinating tale, with the images of it clearly playing in your head, as if a film. Even though I was fully involved in the Dread Journey, I wasn’t overcome by gloom. For those of us who love jazz and blues music, reading this book is like hearing the sad notes of a song where someone’s been done wrong and loving the sound despite the message.

I would be remiss if I didn’t mention the introduction to this edition of Dread Journey. I was thrilled to see it was written by Sarah Weinman, an author whose knowledge of crime and crime writing is exceptional. This introduction by Weinman really deserves a review of its own. It’s concise but thorough, a perfect introduction. Weinman obviously knows tons about author Dorothy B. Hughes, as Hughes is her favorite author and In a Lonely Place by Hughes is a yearly reread, but Weinman doesn’t have to spend pages and pages telling us everything that’s in her head about this author. She conveys to readers the sense of who Dorothy Hughes was and provides remarks about Dread Journey that actually aid in the reading of the story. Weinman’s character breakdown of those traveling on the ill-fated train ride was an invaluable resource to me in keeping the characters straight at first. Reading Weinman’s introduction will give readers the background and notes on this story to enjoy it to the fullest.

To wrap up this lengthy review on a short book, Dorothy B. Hughes can tell a story. Her writing is so flawless that you don’t even realize just how good it is until you’ve finished the book. If Dread Journey is not even Hughes’ most well-known book, then it’s a certainty that I will read more of her. It’s always exciting to discover a new-to-me author and another sub-genre of my favorite genre of crime reading.

Dorothy B. Hughes wrote fourteen crime novels, mostly between 1940-1952, and Dreaded Journey, her eighth, was published in 1945. She wrote only one more novel after 1952, The Expendable Man in 1962. Her books are described as the hard-boiled, noir styles, and I certainly felt the noir in Dreaded Journey. Three of her books were made into movies (1943, 1947, and 1950). Humphrey Bogart starred in In a Lonely Place, perhaps her most popular work, in 1950, and it doesn’t get much more noir than Bogie. After her last novel, she continued to write criticism, reviews, and non-fiction.  For 39 years, Dorothy reviewed mysteries for the Albuquerque Tribune, the Los Angeles Times, the New York Herald-Tribune and other newspapers. She received an Edgar Award from Mystery Writers of America in 1951 in the category of Outstanding Mystery Criticism, and in 1978, Hughes received the Grand Master award from the MWA. In her days before the novels, she had written poetry and worked as a journalist. She died in 1993 at age 89.

“She carried her head like a lady and her body like a snake.  ~ Dorothy B. Hughes, Dread Journey