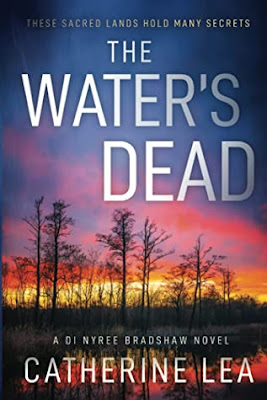 One of the reasons I enjoy reading so much is that it broadens my horizons, introducing me to or adding to my knowledge of worlds beyond my backyard. One of the reasons I read fiction so much is that I like a story with my learning. Fiction can show the effect on people who deal with real life issues, not in a didactic approach but a narrative that allows the reader to become engaged in history and current issues. Enfolding the reader into the story is something at which Catherine Lea excels in The Water’s Dead. Sense of place and authenticity of the characters wrapped in a gripping story ensure that reading this book is a genuinely immersed experience. With Catherine living in Northland, New Zealand, which is the setting of the story, I was excited to dip into a place I hadn’t read about and to learn more about the indigenous Maori featured in the book.

For twenty-five years, DI Nyree Bradshaw of the Far North Criminal Investigation Bureau has worked hard to prove herself in her department of almost all men. When she receives the call that the body of a young woman has turned up in a volcanic rock pool beneath Mason’s Rock Waterfall, she has no idea how huge this case will be and how she will have to prove herself all over again. When Nyree views the body in place, she has a glimmer that it won’t be an easy one. From the chin tattoo on the young woman, it’s obvious that she is a Maori, and there’s lots of distrust between the Maori and those outside their land in the Northland of New Zealand. Permissions aren’t legally required, but to stand a chance of getting any information, Nyree will have to gain permission to come onto Maori land. Fortunately, there’s a detective on her team who is Maori and is familiar with the proper protocols.

Police procedurals are exciting with their investigative procedures and the increasing pressure to solve the case, but this police procedural is particularly time sensitive and urgent. Not only is Nyree looking for the young woman’s, Huia Coburn’s, killer, the DI discovers that Huia was babysitting her cousin’s six-year-old daughter Lily Holmes the night of the murder. Now, Lily is nowhere to be found, and Lily is diabetic, so she needs her medicine to live. Nyree is determined to find Lily alive and get her back to her mother.

DI Bradshaw has her work cut out for her, and the barriers to finding Huai’s murderer and who has Lily keep piling up. She must navigate through the delicacies of interviewing the Maori people on the local marae, as they seem less than forthcoming with information. Huai’s parents, mother and step-father, are behaving in a bizarre fashion, and it becomes apparent why Huai moved out of their home. Huai’s Maori father, Rawiri Cooper, hides information, which is both puzzling and frustrating to Nyree. A Detective McFarlane brought in for another assignment keeps butting into Nyree’s investigation and spreads seeds of distrust in the department about Nyree’s leadership. But, Nyree knows that her work and results will prove her worth, so she tries her best to ignore any dissension. Of course, Nyree realizes that above everything, the most important job she has is to find Lily Holmes. Huia’s murder must be addressed in order to find out who took Lily, and Nyree is running on little sleep to find and follow the evidence. She, and the reader, will be shocked to uncover what the major stumbling block to her investigation has been, a twist that is brilliantly revealed by the author.

Nyree has her personal demons to deal with, too. An estranged relationship with her son and a recently released convict who has sworn revenge against her. One thing that drives Nyree in the hopeful recovery of little Lily is Nyree’s feeling that she failed her own child, her son. She doesn’t want to fail Lily. As the hours turn into days, the suspense of the search grows to a spine-chilling level. The desperation of Nyree to find Lily is felt in the pace of the novel, Nyree and her team interviewing people multiple times and pressing them more and more.

Catherine Lea has given readers a thrilling story, with fascinating characters to both love and hate. I’m so pleased that DI Nyree Bradshaw is to be a series. While it’s clear that Nyree is one tough, dedicated detective, I’m looking forward to finding out more about her and seeing her in action again. I’m wondering which police associates will play a recurring role, as there was a mixture of good and bad, keeping it interesting wondering who was reliable and who wasn’t. I expect that readers will continue to learn more about the sub-tropical beauty that is Northland, New Zealand and the pockets of poverty that are interspersed there. The layered plot in The Water’s Dead was so well paced, creating that building tension and suspense, action getting more intense chapter by chapter. Page-turning is the absolute best way to describe the effect on the reader. I am ready and waiting for the next case, Ms. Lea.