A Three Dog Problem (Her Majesty the Queen Investigates #2) by S.J. Bennett 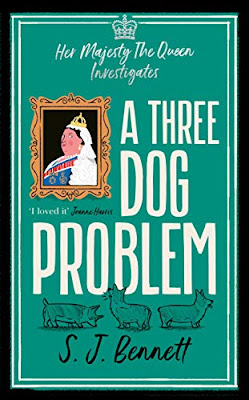 I read this book completely for pleasure, and that is such a lovely way to experience a book. Not that I’m adverse to books that impart important messages. I just sometimes need a read that entertains me and that’s it. A Three Dog Problem (All the Queen’s Men in the U.S.) is the essence of an entertaining read. Oh, there’s crime and murder and evil going on, but we know that the Queen, in her calm and methodical manner, will get to the bottom of it with her discreet, capable Assistant Private Secretary Rozie Oshodi. There’s lots of drama, and the twists and turns are more complex than in The Windsor Knot, but I found the multiple threads in A Three Dog Problem easy to follow and well brought together by the end. There are quite a few names to keep up with, but I didn’t find it disrupting to my reading. And, knowing that a case will be solved in no way takes away from the thrill of events leading up to that solution.

We travel back a few years to 2016 in the second Her Majesty the Queen Investigates book, A Three Dog Problem, by S.J. Bennett. Politics have gone off the rails in both Great Britain and the United States. The Queen is concerned about Brexit, while across the pond, the election of the President of the United States is taking a surprise turn. Of course, she is carrying on her duties as she always does, no matter what else is going on, and so she attends a Royal Navy art exhibition where she discovers an oil painting of the Royal Yacht Britannia given to her in the 1960s. It is definitely not where it should be, as it is her personal property, and she didn’t realize it was missing until she sees it displayed at the Ministry of Defense. This little painting has significant personal meaning to the Queen, and tracing its path to the Royal Navy exhibition turns into a major investigation for the Queen and her sleuthing confidante, her assistant private secretary Rozie Oshodi. It will involve poison pen letters, underground tunnels, and a secret racket called the Breakages Business. Of course, no secret racket is perfect, and this one has begun to leak buckets. The death of a head housekeeper who is found dead by the Buckingham Palace indoor swimming pool combined with the poison pen letters is enough for the Queen to call in help from the Metropolitan Police in the form of DCI David Strong. The detective has worked with the Queen before in the Windsor Castle murder (Book One). He is valued for his thoroughness and his discreet approach to palace investigations.

Not only does the Queen have to deal with the unrest in her country due to Brexit, but the reservicing plan for Buckingham Palace, a major undertaking to fix the aging infrastructure, is about to be presented with its final budget estimate, and that has discrepancies, too. It seems that there are those working in several departments of the Royal employment who are profiteers and not loyal employees. And, this condition has existed for some time, at least as far back as the 1980s. So, the physical repairs needed and the inner workings of the Queen’s royal employ mirror each other in their disarray, and each has its important place in the plot.

Cynthia Harris, the murder victim, had received some of the poison pen letters, along with the high-ranking Keeper of the Privy Purse’s secretary and at least one other. Rozie starts receiving the letters, too, ones that are racist and sexist, trying to get her to leave her job. The Keeper’s secretary does leave her job and leaves London. Mrs. Harris is murdered. Rozie doesn’t desire to leave her job or be murdered, so she must persevere in the face of these scare tactics and keep investigating for the Queen to find out who is behind them. The letters, the Queen’s painting, and the nefarious profiteering scheme appear to be connected, but proof is needed. There are suspects, but without the proof, the evidence, of their wrongdoings, it is unwise to approach them and tip the Queen’s hand.

The Queen and Rozie make a good team. They’re both intelligent, persistent, and resourceful. Another player on their team is retired Detective Billy MacLachlan, who is privy to much of the gossip that swirls around the palace through his connections to other retired Royal personnel. Rozie and Billy do the legwork of the investigation for the Queen, but the Queen is always in control of it. These three are often underestimated, the Queen for her assumed naivety about what is going on in her palace, Rozie for her being female and not “one of the boys,” and Billy for being a retiree and aging grandfather. S.J. Bennett has created these marvelous characters who always exceed expectations. Those who underestimate them often end up paying the price of their prejudices. Bennett has created a Queen character who while duty bound, is as indefatigable in her pursuit of justice as she is in her dedication to the throne. And, the character of Prince Philip shows just how much the Queen relies on his steadfast support and his quick assessment of matters. They have a comfortable communication between them, borne of years of being the only ones who understand what they deal with. And, that they can make the other laugh is a lovely touch. I’m charmed by the Prince addressing the Queen as “cabbage.” We get a brief look at Princess Anne and Prince Charles, as well as a mention of Princesses Beatrice and Eugenie.

The top “Queen’s Men” characters are from the main departments of the Royal Household. The Queen’s Private Secretary, Sir Simon Holcroft; The Keeper of the Privy Purse, Sir James Ellington; and Master of the Household, Mike Green. The other department of the Royal Household (there are five main ones) featured is the Royal Collection Trust, which is responsible for the care and cataloguing of all the Royal artwork. In this story, we encounter several interesting players from the Royal Collection department, past and present. Of course, they’re fictitious representatives of the real office holders, but looking in on the inner workings of Buckingham Palace is fascinating. With the reader knowing just how astute and informed the Queen is, it’s amusing how these department heads think they are in charge. It’s to the Queen’s advantage to let them, plus DCI Strong, take credit for connecting the dots of the investigation. The reader understands the Queen and Rozie and Billy have done much of the investigation in the background. The Queen, as always, must appear to be uninvolved in the messiness of these cases.

I am so pleased that this second book is continuing the success of the first. After an auspicious beginning to a series, the fate of that series is in a precarious position with the publication of book two. The series has that delightful wit that infuses just the right kind of humor and entertainment. And, I have to retract or clarify part of my statement made in the beginning of the review, as I indicated that this book and this series was pure pleasure reading for me and not one of imparting important messages. That is misleading. Although the book was a pleasure read for me, there is lots of learning to be had here and beyond. From the Royal operations and Royal offices of the Palace to the Queen’s daily schedules to the Baroque art of Artemisia Geniteschi, an Italian 17th century painter. And, if you’re like myself and many other readers I know, you will go down all the rabbit holes of those subjects, some for which I’ve provided links below. Also, the poison pen notes bring up the issues of  racism and misogyny, as does the choice of the artist Artemisia Geniteschi whose paintings are featured. And, as the Queen is the main character, there is the overriding issue of how older or “old” people are dismissed in their contributions to or understandings of situations. The Queen certainly puts the falsehood of old meaning useless to rest.

A Three Dog Problem is certain to be one of my favorite reads this year. I highly recommend it to all mystery/crime readers, with a special encouragement to those who are enjoying the Thursday Murder Club series by Richard Osmand.  A new book in S.J. Bennett's Her Majesty the Queen Investigates, Murder Most Royal, will be out this year, 2022. 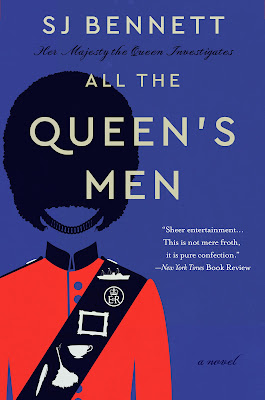 In Addition, Some Links:

Author S.J. Bennett’s web site where includes two interactive maps, one of Windsor Castle (for The Windsor Knot, book one) and one of Buckingham Palace (for All the Queen’s Men, book two). You can find them halfway down the Home page. Click on which map you want and then click on the different rooms for a short bit of information about that room and its use in the books. For we book map lovers, this is so a much-appreciated bonus.  There are some other interesting tidbits on the author's web site, too. https://www.sjbennettbooks.com/

The Royal Collection Trust is a big part of A Three Dog Problem/All the Queen’s Men.  Prince Phillip mentions in the book that there are over 7,000 paintings in the royal collection, and as you explore this link, you can see how much more there is besides that.  https://www.rct.uk/

The UK title of A Three Dog Problem is much preferred by me to its U.S. title, All the Queen’s Men. The reason I prefer it is because I love titles that connect beyond their own story, and A Three Dog Problem connects to a Sherlock Holmes story, “The Red-Headed League,” in which Homes notes, “It is quite a three pipe problem, and I beg that you won’t speak to me for fifty minutes.” Holmes had his three pipe problems and the Queen has her three dog problems, wherein she walks the grounds of the Palace with three of her dogs to think about what’s bothering her, and in A Three Dog Problem, there is quite a bit that is troubling her. (The chapter where this walk occurs is one of my favorite in the book, with its description of the grounds, the dogs, her reminiscences of Philip, and her thought process about the problems at hand.)      https://www.pagebypagebooks.com/Arthur_Conan_Doyle/The_Adventures_of_Sherlock_Holmes/ADVENTURE_II_THE_RED_HEADED_LEAGUE_p1.html

Artemisia Geniteschi is the 17th century artist whose paintings are featured in one of the mysteries of A Three Dog Problem. In a book where the two main characters are strong, resourceful women I don’t think the choice of this artist was in any way random. She was certainly ahead of her time in what women were allowed to accomplish, and her story is as exceptional as her paintings.     https://www.artsy.net/article/artsy-editorial-baroque-master-artemisia-gentileschi