The Corpse with the Turquoise Toes by Cathy Ace: Reading Room Review 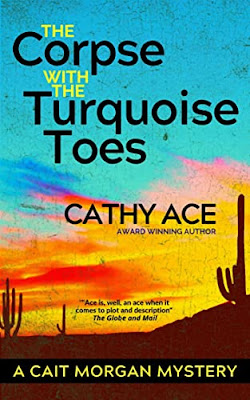 Criminal psychologist Cait Morgan and her retired homicide detective husband Bud Anderson are off to the Arizona desert in the 12th Cait Morgan book, The Corpse with the Turquoise Toes by Cathy Ace. After a rocky ride in the private plane provided by aging rock star Sammy Soul to bring them there, they arrive in Arizona with high anticipation of having a week’s vacation to relax. The trip is being paid for by Sammy Soul and his wife Suzie as an act of gratitude for Cait and Bud saving their daughter’s life some years before. Now that daughter, Serendipity, is a chef at the new restaurant at the equally new Desert Gem resort. The resort is the home base for the Faceting for Life movement, and Cait and Bud are the first and only guests before its opening to the public. Serendipity is hosting them and is eager to show off her restaurant.

Before our ever-hopeful-for-a-quiet-vacation couple even set foot on the Desert Gem complex, they receive a message from Serendipity that Linda Karaplis, the founding member, along with her recently deceased husband Demetrius, of the Faceting for Life movement has been found dead. Elizabeth and Norman, the Facetors driving Kait and Bud to Desert Gem receive a call to make haste in returning, as Linda’s son Oscar is missing after hearing that his mother was gone. Cait and Bud fear that once again their vacation is going to have high drama involved. Elizabeth and Norman have already raised some red flags at their strange reaction to finding out Bud was an ex-lawman.

Shortly after arriving at the Desert Gem and after meeting up with Serendipity, also a devotee of the Faceting movement, at her restaurant, word comes in from the search for Oscar that he has been found dead in the desert surrounding the complex. His neck is broken, and it’s assumed by the group that he fell. Well, there are two people at the Desert Gem who think that the two deaths, mother and son, so close together is suspicious. When Bud asks if the police have been called, he gets stonewalled and assured the community is handling the deaths. They have a doctor, who is also a Faceting for Life disciple, coming to pronounce cause of death. Kait and Bud become more and more concerned that the Faceting for Life movement is more of a cult than a chance for personal growth.

The surviving member of the Karaplis family is Zara Karaplis, the daughter of Linda and Demetrius, and she is the revered leader of the movement now. Zara claims her father has “pierced the vale” and she is now channeling him with messages from the beyond and advice for the living. Kait and Bud think Zara’s claims are pure hogwash, but it’s uncanny the way she knows things about people, their past and their loved ones, that she presents as knowledge from her dead father. When our doubting duo learn that Linda’s death was a suicide brought on by Zara’s communication from Demitrius that it was his wife’s time to die and join him, Kait and Bud are suspicious that there’s something very wrong at Desert Gem. Upon further learning that other recent deaths were suicides brought on by the same directive from Demitrius through Zara, Kait and Bud see red flags popping up all over the place. They know they must do something, but in a setting where they are the only two skeptics, investigating the Facet and Face It movement now controlled by Zara seems an impossible task. Secluded in the Faceting Movement’s compound, with no transportation of their own and too far to walk for help, Kait and Bud are once again truly on their own.

Cathy Ace gives readers some great characters in this new book. Cait and Bud are always a delight, with their support and understanding of one another. I enjoy how their communications with one another are always thoughtful. The characters added for this story are so intriguing, with their secrets and loyalty to a mythical based belief system. Serendipity Soul is the host for the Morgans visit, wanting them to share in the opening of her restaurant associated with Desert Gem, but she seems skittish and somewhat on edge from the very beginning of their visit. KSue, best friend of the recently departed Linda, is the typical adult follower of such a movement, where she has spent much of her money to have a place at Desert Gem, if only for a number of months (It’s an expensive place to live or stay.) KSue adds lots of drama to the story, and gains both the interest and the concern of Kait and Bud. The almighty leader Zara is a fascinating study in leadership by manipulation. Ambroise was a friend of Oscar, Serendipity, and Zara before the Desert Gem undertaking and is protective of his friends. There’s an interesting dynamic between Ambroise and Serendipity, and it’s hard to pinpoint just what their relationship is. It’s a well-developed cast of players, and trying to figure out who is trustworthy will bring some exciting twists to the story.

Mind manipulation a gripping subject matter, a scary one, too. Cathy Ace gives readers a story that cleverly addresses current conversations about how people can so blindly “follow the leader.” It’s a tale as old as time, but Ace gives it a fresh spin that will have readers on pins and needles worrying about the outcome. Fans of the series will love following Kait’s and Bud’s dogged determination, their always witty conversations, and their ability to face even the most daunting of circumstances. And, with Ace's skillful description of the blazing heat of the day and the complete darkness of the night, readers will feel the discomforting temp and the fright of things that go bump in the night right along with the characters.