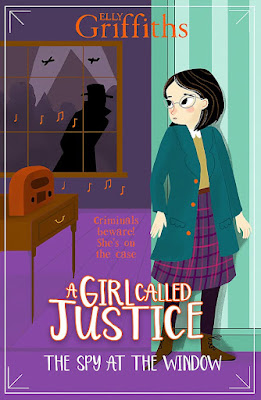 I know I have started the reviews for the first three Justice Jones mysteries by Elly Griffiths with a gushing statement of affection, and I’m about to go full-on gush for number four, The Spy at the Window. This children’s series is every bit as thrilling for adults as it is for the younger audience, with its engaging characters and immersing plots. We started out with Justice at age twelve, entering Highbury House Boarding School for the Daughters of Gentlefolk late in the first semester. Her mother, who was an author of mysteries, had died, and her barrister father thought Highbury was the solution for Justice’s care and education, as his work kept him so busy. Herbert Jones also knows the head mistress of the school, Miss Delores de Vere, a friendship Justice is still trying to figure out, so there’s a ready connection for Herbert to keep apprised of how Justice is doing.

Over her last few years at the school, Justice had made some great friends of her own and solved some tricky mysteries, where even murder was involved. Highbury is located on the edges of the Romney March area of southeast England, a remote, isolated setting that’s conducive to the unusual and spooky. The architecture of the school itself seems made for mystery, with its turrets and tunnels and cellars and priests’ holes. It’s the perfect setting for Justice and the rest of her mystery-loving group of friends. And, I’m especially taken with the time setting of the late 30s and early 40s, as solving a case is all down to leg work, careful observation, and note taking. No cell phones or Internet exists, it’s putting clues and evidence together at its basic best. Justice is a list maker, and as she explores the mysteries that pop up, she keeps a journal of clues and suspects and observations. A passed note or found letter is far more thrilling than a text message, any day or creepy night of the week.

The fourth book of the series, The Spy at the Window, opens in December 1939 with the announcement of England going to war with Germany. Justice is fifteen and returning to school after Christmas holiday during her 5th Form. Things start to change very quickly in England. Young men are leaving their families to fight in the war and everyone at home is adapting to living with less and organizing into community units for safety and survival. Justice has the comfort of her best friends at school (and fellow sleuths) Stella and Dorothy and Letitia. Of course, the rest of the Barnowls Dormy are there for each other, too, even persnickety Rose. Blackout curtains have come to Highbury House, like they have to every house in England, and due to the servants not being there to work, the students must do dusting and sweeping and washing up of the dishes.

But, the big change is totally unexpected. The boys of St. Wilfred’s School come to share Highbury House with the girls. The intention at first is to keep the two groups entirely separate, but then sports brings them together. Justice makes a new friend in Henry and, of course, Rose finds a boyfriend. The two male teachers who accompany the boys’ school are quite different from one another. One is from a military background and a take-charge personality, and the other is a much less assertive person whom the boys seem to take advantage of. The two groups of students live beside each other in harmony, and it seems no mystery will be forthcoming from that change. However, when Justice hears voices from an unoccupied turret room and sees a man’s face at a window two stories up, curiosity and investigation follow. When Justice’s father disappears after the half-holiday at Highbury, anybody and everybody is suspect. Justice and her crew must take everyone now residing at the school into consideration for a possible link to the disappearance. Justice can’t bear the thought of her father being gone, in addition to her mother, but will a young girl and her friends be able to root out a spy and find Mr. Jones?

This story was brilliantly suspenseful, the kind you feel deep in your bones. I’ve enjoyed watching Justice grow and mature in her time at Highbury, and it seems her father made a wise choice indeed in sending her there. From the beginning I’ve loved that Justice is a young person who is comfortable in her own skin and has confidence in her abilities. This clever, intuitive, kind character has endeared herself to so many readers, including the adults, like me, who realize that great storytelling knows no age limits. Of course, the author being Elly Griffiths guarantees the best of stories and characters. Her Ruth Galloway series, her Brighton series, and her standalones/Harbinder Kaur all have favorite characters for me. I’m so glad that she has added the Justice Jones series to her repertoire. I can’t wait to see what mystery next befalls the Highbury House Boarding School for the Daughters of Gentlefolk.

A final note I will include because I am such a big fan of great book covers.  The books in the Justice Jones series have some of the best covers you'll find. They are both a visual and textural delight. The colors with the predominant purple and shades of green and blue with touches of black perfectly create an atmospheric sense of mystery.  The slick and raised parts, as in the pictures of the other books in the series on the back, are an added treat for those who appreciate the textures of book covers. This is why I have to buy the print copy of the books, and I can truly say that I enjoy these books cover to cover.