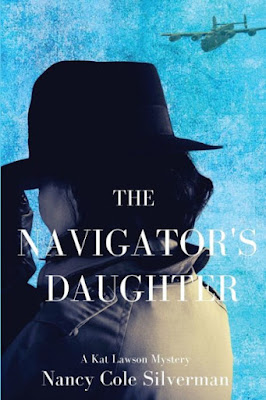 The leading character for The Navigator’s Daughter is Kat Lawson, who is facing some important life changes and challenges. She has lost her newspaper reporting job, her father is dying of cancer, and she’s heading for divorce. She has plenty to deal with and figure out right where she is, but her father has made a request. He has received a letter from one Sandor Zselnegellar telling him that his WWII B-24 plane has been found in Hungary, in the area of Tomasai. Kat’s father wants her to go to Hungary in his place and see the plane. He also wants her to try to locate the woman and young boy who saved his and two of his crew’s lives by hiding them from the Germans. The time setting is 1996, fifty years after the war, so it's possible the woman and boy are still alive. Kat was named after this woman, Katarina, so she realizes how important her going to Hungary is to her father. She suspects that this discovery and this Sandor fellow might turn out to be a scam, but she agrees to go and keep alert to any tricks on the part of him.

When Kat arrives in Budapest, Sandor has arranged for her to stay with his cousin and wife, who have just turned their guest bedroom into a rental unit. Not having had time to arrange a hotel herself and upon seeing the beautiful view from her room, Kat gladly accepts Sandor’s arrangement. Kat has a week to see the plane and find Katarina and her son Adolph. Her search will take Kat to the countryside outside of Budapest and to the small town of Keszethely. While Sandor is Kat’s main guide, she meets a young Gypsy man who is knowledgeable and much more forthcoming about the cave and tunnels in which Kat’s father and his friends hid. She still feels like Sandor is up to something, even though he does show her the plane, and so having another guide proves useful to her. The cousin of Sandor’s also seems to have a personal agenda, but Kat is shocked when she discovers just what his true nature and purpose is. In fact, Kat will uncover some long-held secrets that will rock her world as she has always known it.

To tell more would ruin the surprises and twists that Nancy Silverman so cleverly created for the story. Kat and the rest of the characters are well developed, as I was interested in what each of the ones connected to Kat would do next, and I continued to wonder about them after finishing the book. I do hope they will all return in book two. I was delighted to learn more about Hungary, especially Budapest. Kat’s evening walks helped bring the setting to life. And, the historical connection of Hungary during WWII was new and fascinating to me. I didn’t realize that Hungary switched sides, from the Axis to the Allies, and that the country was first occupied by Nazi Germany and then communist Russia. Information gleaned through the threads of the story about Hungary’s Jewish population had me researching more. I always enjoy when a book leads me to reading more about a subject.

The Navigator’s Daughter series is going to be a must-read series for me. It checks so many boxes. Historical fiction, mysteries involving art works, and a lead character who isn’t afraid to take on the challenges of a whole new life. I haven’t gotten into the art in the book, but suffice it to say, I learned some interesting tidbits there, too. I also liked that the idea for the book came from a real experience. Those who enjoy their historical fiction with mystery and connections to WWII are going to love The Navigator’s Daughter.

Full disclosure is I received an advanced copy of this book from the author for a honest and fair review.