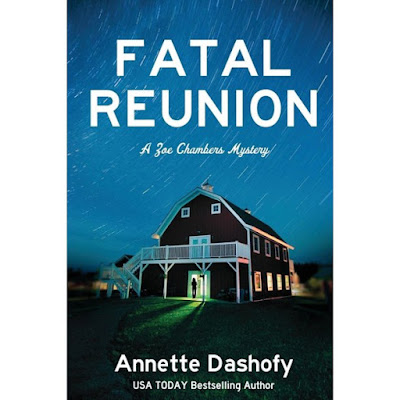 It’s good to be back in Monongahela County, Pennsylvania with a new Zoe Chambers book by Annette Dashofy. Fatal Reunion, #11, is being enthusiastically welcomed by the many fans of Zoe Chambers and Pete Adams. The covers have always been some of my favorite mystery/crime book covers, and the cover for Fatal Reunion is another engaging one. Because the series is so good, I sometimes forget that the cover of Circle of Influence, the first Zoe Chambers book, is what made me pick it up, and in this case, you certainly can choose a book by its cover. I discovered this series in 2020, when we all found ourselves home-bound, and I read all ten that year. I found great comfort in the reliability of Annette Dashofy to always deliver a gripping story. With Fatal Reunion, she may have given us the best yet.

Zoe Chambers-Adams is finding her new job as County Coroner keeps her plenty busy. Switching from her former job as paramedic where she fought to save lives, Zoe now deals with only those whose lives have ended. She and husband Police Chief Pete Adams now live on the farm Zoe’s mother gave her, so she can still take care of her beloved horse and a few other boarding ones, plus sneak in rides, an activity that helps keep her centered. Pete, a city boy at heart, is slowly adjusting to his new country life, having come from Pittsburgh and living in town in Vance Township when he became Chief of Police there. And, Pete has also grown used to the different situations and kind of people he encounters in his Vance Township job as a rural community. However, I always enjoy when the author throws him a new situation that’s country born. Fatal Reunion opens with Pete and backup from other agencies chasing a juvenile on a giant John Deere tractor that the kid, of course, has stolen. Of course, Pete gets his tractor and his perpetrator after a wild ride through the countryside. The kid is a juvenile who has been in trouble on a frequent basis in the area, and he will be around the rest of the book muddying the waters a bit.

This story quickly grows darker when a local teenage girl goes missing. Taylor is a senior at Monongahela High School and hasn’t been seen since leaving her house for an after-dinner walk. Law enforcement and the community search for three days in hopes to find Taylor alive. Pete and his department retrace her movements the day she disappeared and talk to her boyfriend with whom she’d just broken up. But, Taylor has been dead since shortly after she was last seen by her parents. Vance Township is horrified by her brutal death.

The location where Taylor’s body is found brings back memories of the Monongahela Strangler, who preyed on teenage girls when Zoe and her friend Rose were seniors at the same Monongahela High School. Twenty years ago three girls were abducted, raped, and murdered and were also left in a field like Taylor, one girl in the exact location. Zoe, whose 20th high school reunion is the coming weekend, is most uncomfortable with the similarities, even though she knows that a teenage boy had been singled out as the murderer and killed himself before he was charged or tried for the gruesome murders. The murders had stopped after the suicide, but Zoe knows that could be due to several different scenarios. Pete, who isn’t familiar with the crimes or victims from the twenty-year-old case is looking squarely at the animosities between the victim’s family and that of her boyfriend’s family.

To add fuel to the fire of connecting the old murders to the new one, Zoe’s friend Rose is in town for the reunion and swears she sees a lurking male classmate who used to sexually harass them. Rose had always thought that particular creepy classmate had committed the earlier murders, not the young man who was vilified in the press for it. But, Zoe has not seen this man who had basically fallen off the face of the earth from everyone’s radar. She wants to believe Rose, and the sighting gains credibility when a former teacher of theirs, who is also in town for the reunion, confirms seeing the man, too. However, the lurking classmate seems most elusive to track down.

There are plenty of people connected to the current murder case and the murders from twenty years ago, and it’s interesting to see how Pete goes about his police work to break loose pieces of information buried deep about persons of interest. He is thorough and doesn’t hesitate to use other law enforcement resources to aid in the investigation, such County Detective Wayne Baronick and Pete’s friend FBI Agent Ethan McCoy. Rose’s husband, Miguel Morales, who is a deputy sheriff in New Mexico, helps some on this case, too. And, Pete stays in touch with Warren Froats, who was Vance Township’s police chief when the Monongahela Strangler killed the three high school girls twenty years ago. Baronick has access to a lab and other conveniences that the small town of Vance Township doesn’t, so Pete works with Wayne quite frequently. I’ve come to really enjoy Pete and Wayne working together, with their friendship and Wayne annoying Pete. Wayne’s sister Abby works as a new police officer for Pete, and is a bright up and coming investigator. And, of course, Zoe is an unofficial investigator, who works so well with her husband and Wayne. She knows the county and its people, which can be an invaluable resource. It’s a unrelenting trio who use plenty of legwork along with technology to find the truth.

While on the way to resolution in Fatal Reunion, the twists of direction will keep the reader guessing just which one of the persons of interest had the means, motive, opportunity, and intent. I changed my mind several times as to who I thought was the killer, and even briefly considered the actual guilty party, but Annette Dashofy cleverly ensures an element of surprise in the book’s finale. It’s an action-packed dramatic end, something Annette Dashofy is a master at. The pacing throughout the story is in step with the suspense, as layer after layer of secrets are peeled back and brought to light. Like all intriguing storytelling, the pieces are out there floating, waiting to be caught and connected.

The slightly longer than usual wait for Zoe Chambers #11 has been well worth it. I’ve read where quite a few people are saying this latest book in the series is their favorite, and I agree that Fatal Reunion has all the earmarks of outstanding in the series. Annette Dashofy is brilliant in developing her characters and plots and pacing. And, let's not forget dialogue, as it always captures the essence of the characters. The suspense is spine-tingling throughout the book, and it will take your breath away at the end. That’s why you might want to clear your schedule when you sit down with Fatal Reunion. You will not want to leave it once you start it.

Full disclosure is that I received a paper ARC from the author for a fair and honest review. My review reflects exactly how the book affected me.