The Case of the Disgraced Duke by Cathy Ace: Reading Room Review 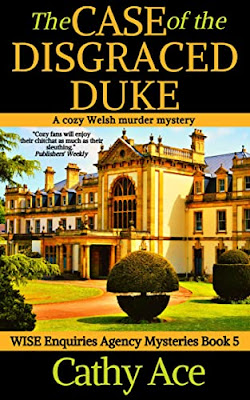 I am so happy that there is a new WISE Enquiries mystery out. It’s been quite a wait for a book from one of my favorite series, but Cathy Ace makes it easy to jump right back into the charming, quirky Welsh setting of Awen-by-Wye in The Case of the Disgraced Duke.  She has put together a cast of characters for this series who are not easily forgotten, ones a reader are always eager to return to. And, while there are the four main characters of the WISE Enquiries Agency, there just as many supporting characters readers can’t get enough of. That is quite the accomplishment for an author. Of course, a good story and interesting setting are also needed, and check, check on those elements. There is always a case, or two, that requires the superpowers of the four women (and the Dowager Duchess Althea, who usually manages to get in on the action).

The WISE women are a diverse group of private investigators who, despite their different backgrounds and skills, work brilliantly together. WISE is comprised of one Welsh woman named Carol, who is a whiz at culling information from the computer and assembling it for use; Irish Christine, who is a titled Irish aristocrat with a sharp mind and lots of helpful connections; Scottish Mavis, a retired nurse of wounded soldiers and the organized leader of the group; and English Annie, whose warm and unassuming nature can get almost anyone to open up to her. Those who underestimate these women, like the police and criminals, learn the foolishness of that mistake.

There’s lots that seems to be happening in this new book, both personally for the women and work-wise for the agency, and the main focus is a problem at Chellingworth Hall. The WISE Agency has a close, like family, connection with the Duke and Duchess of Chellingworth, and the Dower Duchess. Their first case was for Henry Devereaux Twyst, the eighteenth Duke of Chellingworth, and it is through this case that the women came to the village of Anwen-by-Wye. They even have their offices in a converted barn on the Chellingworth estate, and Christine lives in an apartment in this barn. Mavis lives with Althea, the Dower Duchess, in the Dower House on the estate. So, the Chellingworths and the WISE women have become an intricate part of one another’s lives.

Henry is in a state, which isn’t unusual for him. His wife Stephanie is pregnant with their first child, and he’s far more nervous than she is. And, there’s a danger to the reputation of the Chellingworth legacy that has just been discovered. The thirteenth Duke of Chellingworth, Frederick, is rumored to have been an addict who killed two people on the estate without having faced consequences from the law, and Frederick is suspected of committing suicide to end his life. Both Henry and Stephanie are eager to investigate these rumors and, hopefully, put them to rest before the baby is born under a tarnished line.

The WISE Agency is just the resource needed to uncover the truth about Frederick. However, at this time, Annie is off on an undercover assignment, Carol is spending every minute she can on a rush background check for a client, and Christine is still not completely recovered from her gunshot wound. This might be a problem for some investigators, but this group can double down like no other. A central command center is set up in the Chellingworth Hall library where books with information pertaining to the time of Duke Frederick are stored. Mavis is there to order the troops, Christine feels she’s up to this work and is there, Henry and Stephanie take an active part to protect their family reputation, Christine’s boyfriend Alexander and a friend of Stephanie’s join in, and there is always the Dower Duchess Althea in the thick of it. There will be a secret report, church records, and documents from a most unexpected source discovered in the search for the truth.

As the major operation is taking place at Chellingworth Hall, Annie is off on a covert assignment to Swansea. Two sisters are worried about their elderly father who is involved with a much younger woman, who is also his carer. The sisters are aware of family possessions, such as their mother’s jewelry being sold off recently, and the carer/girlfriend of their father is blocking access to him. Annie poses as another carer come to the area looking for work, and she makes friends with the father's carer in a hotel bar. Annie is unsure whether the woman is taking advantage of the man, but she does know the woman is a heavy drinker. While on this case, Annie is also pondering her relationship with the pub owner in Awen-by-Wye.

Carol is working furiously to get a thorough and rushed background check done for a client who is uncertain of the buyer for her hair salon business. Carol’s husband is out of town, and baby Alfred is not making it easy for her to work and get any sleep. She is stretched thin, and the last thing she needs is for her neighbor across the road to ask for help in a theft of jars of jam from her shop. Yet, Carol doesn’t like to turn a fellow villager down who needs help.

It’s a mixed bag of results for the different cases in this story, but all the cases show just how dedicated and successful this WISE group is. All the results have long-reaching effects for the clients and I’m predicting for the investigators as well. Annie’s case will have a profound effect on her, and I am wondering what changes the next book will bring in her life. Christine and Carol are also poised for some major decision making, and Mavis is facing a scary situation for someone she loves.

I thought that this new addition to the series was a brilliant one. The WISE women are settled into a successful business now, but they aren’t so settled personally. Cathy Ace has given readers a great story in The Case of the Disgraced Duke, and she has set up questions to be answered in the next story. These are not what you might consider traditional cliffhangers, but as is natural in life, a progression towards figuring out what’s important. Fans of this series are going to love this book, and readers just coming into the series will be spurred on, or back, to read the preceding books. Just please don’t keep us waiting for #6 so long this time, Ms. Ace.