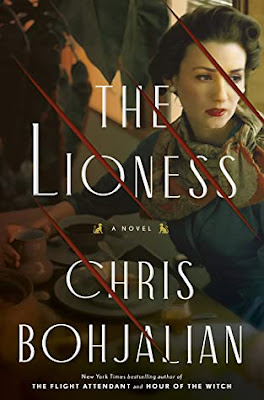 Powerful. The title of this book, The Lioness, encapsulates the content perfectly. The action, the characters, the outcomes are a gale-force wind, a weight bearing down on you that makes you gasp for air. Putting down this book once you start reading it is a gargantuan effort of separation from one of the most compelling reads you’ll encounter this year. It will own you, pure and simple. Many people find the thought of going to Africa, to the Serengeti, an irresistible pull. The magnificent sights of lions and leopards and elephants and giraffes and hippos and rhinos and wildebeests are a temptation of great reward. Walking among the wild, defying death, and feeling one with the earth. Who doesn’t want that? But, as author Chris Bohjalian will show you, too often what we imagine and what is real take us very different places.

It's autumn 1964 and one of Hollywood’s most popular leading ladies, Katie Barstow, is a newlywed, having just married a man she’s known since childhood. In fact, David Hill is the best friend of Katie’s brother. Katie has generously invited seven of her close friends and family to go on a dream photo safari as part of her and David’s honeymoon. Meeting the couple to fly out of Paris are Katie’s brother and his wife, her best friend (also an actress) and her husband, her publicist, her agent, and a male actor friend of Katie’s. She’s paying for all of it, and it promises to be the trip of a lifetime.

And, for a few days, it is all magical. The owner of Safari Adventures, Charlie Patton, makes sure of that. Employing the best of guides and porters and cooks ensures the guests will want for nothing. Even hot baths and ice are available, and knowing the land so well, Charlie and his guides are able to take the enthusiastic photo hunters where the different animals dwell. But, on the fourth day, after viewing some majestic giraffes drinking water, the camp is attacked by Russian mercenaries who take the guests hostage. It is over quickly, with a few of Patton’s crew killed in a bloody blast of gunfire, while the Hollywood guests are loaded into two different Land Rovers. A third group, consisting of guides and workers, are gathered and secured in a truck. Benjamin Kikwete, a porter, is one of those who is loaded into the truck and who becomes the tenth voice in the chorus of narrators, conveying the fates of his particular group.

But, why did the Russian mercenaries take the tourists hostage? It’s a question they all are asking themselves, and the reader will speculate along with the characters. The answer to this burning question won’t be revealed until close to the end of the story. Without the information of just what the kidnappers want, it’s hard to know whether to risk trying to escape. And, really, is escape a choice? Even if the hostages could escape the mercenaries, they aren’t escaping to safety. It’s out of the frying pan into the fire. There are predators waiting in the trees and on the ground for a meal. Getting “eaten” is their worst nightmare.

Each member of the Hollywood group, three women and six men, narrates their own current life and death situation, as well as giving background to their lives that brought them here. The chapters alternate from one character to another, with Benjamin Kikwete’s occasional chapters. The author was wise to give readers a list of these characters at the beginning of the book, with a name and brief description of who they are. That list is what helped me keep the characters straight at first, although I found it rather easy to differentiate them early on, as the author created distinct personalities and engaging back stories for each one. Readers are there to the very end with each character, those who lived and those who died. And, there’s no denying that some of those deaths are graphically brutal, and some will shock you more than others. There are no lingering after-life voices. When a character dies, so does their narration.

The Hollywood group had “christened themselves the lions of Hollywood at Katie’s wedding,” and those reporting on them in the states used that moniker in their reports. Irony can be a bitch. Hollywood royalty doesn’t matter in the wilds of the Serengeti, and presumptions of grandeur fall on deaf ears as leopards and lions stalk their prey and hyenas circle. Each chapter begins with a snippet from a Hollywood gossip magazine, sometimes about someone in the group and sometimes about other well-known Hollywood stars of that time. These snippets serve to remind the reader just how trivial was the movie star life these nine tourists led compared to their now life and death struggle. Who was seen with whom, or what party one was invited to, that was nothing now. One narrator sums up what had become most important in their lives, “Just stay alive. See if, somehow, we might see the sun rise one more time.”

This book has been described as historical fiction and/or literary fiction, and the story does take place in a time of important historical changes in Africa. But, my preferred genre is mystery/crime, and I know a thriller when I read one. The Lioness is as suspenseful and chilling as any thriller I’ve come across. However, the historical elements of the time weaved into the story were well-placed and enriching. The unstable political climate in areas surrounding Tanzania and the Serengeti added another element of danger to the story and played into the Russian mercenaries’ disdain for their captives. For the group being held by these men there was the fear of being taken to the Congo where Westerners’ lives had no value and Russia was heavily invested in supporting the rebels. And, the setting of Tanzania itself is newly formed from Tanganyika and Zanzibar in East Africa. There’s also the change in the traditional safari that included hunting the animals for trophy heads and skins. The popular type of safari by this time was one in which photos, not heads, were taken. The leader of Katie’s safari, Charlie Patton, had himself been learning to adjust, as he once took the avid hunter and famous writer Ernest Hemingway on his forays. Another interesting item and variable affecting survival is a certain habit that both men and women engaged in during the 1960s, before warning labels were applied to its packaging. I’m sure it’s easy to ascertain what I’m talking about, but you might want to give it some thought as you’re reading through the Hollywood hostages’ accounts.

If this book were a person, you would call it larger than life. To try and put that into descriptive words for a book, I still fall back on the jargon of another medium, one that is particularly appropriate for this book, with its Hollywood group. The Lioness has a big-screen impact, a cinematic story that encompasses a wide swath of heaven and earth, beauty and danger. Of course, the setting of the Serengeti is itself a sweeping panorama of the splendor of nature. The cast of characters is also epic, both in number and essence, with heroes and the easily defeated. Instead of the trip of a lifetime, they get the test of a lifetime. What is a person really made of when hope is but a flicker in the dark? It may not be something you want to find out.

The Lioness is now on my list of favorite reads ever. I will be recommending it to everyone and being rather pushy about it. Oddly, it is the first Chris Bohjalian book I’ve read, and I can’t imagine why that is. I do know that it won’t be the last.