Things We Do in the Dark by Jennifer Hillier: Reading Room Review 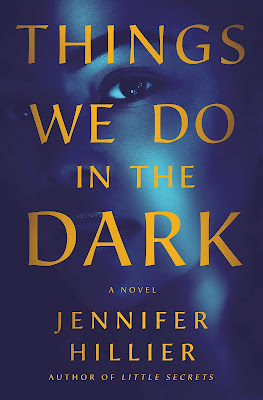 Jennifer Hillier is brilliant at showing the complexity of a human being. Not all good, not all bad is usually how a person’s character untangles. Of course, there are those people who are so good and nice and thoughtful, you cringe at your own comparison. And, there are people who are truly evil, some who are psychopaths or sociopaths and some who seem to defy diagnosis. Hillier’s focus on her main character is more on circumstance and related behavior, showing readers that given the right (or wrong) circumstances, everyone has a capacity to do, well, things they don’t want to see the light of day, maybe even those salt of the earth people. My favorite book by this author is still Jar of Hearts, because it was the first book that truly made me see someone who did something very bad in a new light. Things We Do in the Dark continues Jennifer Hillier’s keen insight into the psyche of people and their motivations. Sometimes in desperation a good girl must do something bad to get to a better place, and sometimes her secrets surface.

In a recent article in CrimeReads, author Jincy Willett explores that in her early mystery reading she read the Agatha Christies and older books that concentrated on the who-dun-it, and then after reading a Ruth Rendell, Jincy was never again satisfied with the focus on who. It was the “why” that was fascinating. Jennifer Hillier takes the why one step further and explores the universality of the why in any given person. You don’t have to be a villain to murder, and the reader looks inward to ask the question of applying that personally. Even an unreliable narrator can show us the mistake of judging a murderer too quickly.

Paris Peralta comes home to Seattle early from a yoga conference, and the next thing she knows she’s waking up in her bathroom beside a blood-filled tub with her dead husband in it. In her hand is a straight razor with blood on it. Her husband, Jimmy Peralta, was thirty years her senior and had just made a huge come-back as a comedian via a streaming special. His assistant Zoe is screaming that Paris has killed Jimmy and the police are taking Paris into custody. Paris is scared that people will believe she killed Jimmy, whom she really loved, but she’s more scared that a past she’s worked hard to conceal will be revealed. She had signed a pre-nup with Jimmy, so will people really think she killed him for his money? Well, when the new will is found and Paris stands to inherit 47 million, her motive just went up by about 45 million. As if a murder charge and worrying about her past isn’t enough, Paris has a blackmailer intent on getting rich or telling the world what Paris did in her previous life.

In Canada, Ruby Reyes, aka the “Ice Queen,” is about to be released from prison after serving twenty-five years for murdering her married lover. Drew Malcolm, an investigative journalist turned pod-caster was, for a short time, a roommate and close friend to Ruby’s daughter, Joey Reyes, who was abused and tormented as a child by her mother until Ruby was sent away for murder. Drew finds it appalling that Ruby will live free again, as he doesn’t believe that she will ever be anything but a self-centered monster who preys off people. So, Drew is committing his whole new podcast season to exposing the evils of Ruby Reyes. This means he will have to go back to a painful personal past where Ruby’s daughter died a horrific death.

These two storylines will come together in a twisty mesh of past and present. It is a fascinating reveal, but one that the reader will probably see coming. That’s okay, though, because the intensity and thrill of seeing how it all connects is full of little surprises. Things We Do in the Dark is indeed a dark tale and contains triggers of emotional, physical, and sexual abuse. Hillier was respectful of these triggers while writing the book and there are no graphic scenes, no gratuitous horrors. However, these abuses are central to the characters whose lives are formed around them.

The dual story is told through the eyes of Paris and Drew and Joey, with flashbacks guiding the narrative. I enjoyed Paris’ descriptions of her and Jimmy’s relationship. It was a bright, sweet spot among so many sad, painful ones for Paris and other characters. Joey’s narrative was heartbreaking, but I loved the strength and pragmatism she brought to her story. She didn’t give up, but she didn’t sugar coat it. I came to appreciate Drew in the end, but there were times his judgmental thoughts and actions irritated me, especially his condescension toward Joey for her short-term career choice. It takes Drew a while to realize choices aren’t always black or white, right or wrong. Ruby is irredeemable, and readers know that from the get-go, but she is a perfect villain to despise.

There are quite a few characters in this book, and Jennifer Hillier does an exceptional job of fleshing out both the major and minor players. No one felt flat or unnecessary. I think that’s quite an accomplishment with two story lines and two sets of characters. Even Jimmy, who died right off the bat, was given life through the flashbacks, and I have to admit, I really liked him with Paris. All the characters, both past and present, were well defined, so no confusing characters to undermine the story’s flow.

Things We Do in the Dark is another thrilling Jennifer Hillier brand read, giving readers the expected story of a character with a shadow hanging over him/her. But, Hillier’s stories are never a repeat; each one is original. I thought this book was especially dark, but most crime/mystery readers are no stranger to those tales. The triggers I mentioned earlier might need to be considered by some before reading, but, as I noted, Hillier doesn’t get graphic with the abuse. I felt the ending was a bit rushed but not in a terribly frustrating way. I think those readers who are already fans of Jennifer Hillier’s exceptional writing will be well pleased, and those readers who are new to this author will want to read more of her books after this one.