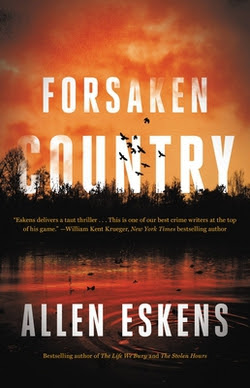 Before I can start the review on Forsaken Country by Allen Eskens, I have to reiterate some givens about this author’s writing and his books. I am absolutely in a state of thrall when I read a book from Eskens. His writing is a seamless flow of brilliant characters, engaging setting, purposeful dialogue, and distinctive voice blending together to form stories I can’t forget, nor do I want to forget. The difficulty in reviewing a book by Allen Eskens is I immediately want to talk about all the books by him that I’ve read. There’s a reason his other books come rushing back at me when talking about his latest. This exceptional author has cleverly connected his books through a myriad of fascinating characters who might appear as a main character in one book, or that character may only be referenced in passing in another book. Eskens states that “My books are not a series, but rather character arcs that revolve around a small community.” It is the history of connection that persists, as the different characters take center stage in different stories, that makes his books so uniquely extraordinary. So it is with Forsaken Country, featuring Max Rupert, who is making his fourth appearance as lead character.

Max Rupert is a man on a mission, a mission to maintain a life devoid of pleasure or happiness, as he seeks repentance. He is in his third year of self-imposed exile after an event in which he believes he forfeited his soul and damned himself. He lives somewhat as a hermit in a cabin in the woods outside of Grand Rapids, Minnesota, his hair grown out and a beard down to his chest. He ended his career as a highly respected homicide detective with the Minneapolis police, retiring from it and the world. Well, Max might be finished with the world, but the world isn’t finished with Max.

Max hasn’t given up all contact with civilization to live in the woods. He still shops for groceries in town, and it’s on a trip for groceries he runs into the former sheriff of Grand Rapids, Lyle Voight. Voight is there with his daughter Sandy and grandson Pip, and Max’s interaction with Pip brings up memories of the child Max lost when his wife died. Shortly after this meeting, Lyle shows up at Max’s cabin asking for help in finding Sandy and Pip, who have disappeared. Max is reluctant to get involved, feeling he can’t allow himself to be a part of things anymore. But, Lyle’s parting words of “he’s just a little boy,” linger hard in Max’s mind and heart, so he joins Lyle in a search driven by desperation to find daughter and grandson before all traces are lost. Current Sheriff Bolger is convinced that Sandy has just taken Pip and run away, but Sheriff Bolger is also friends with Sandy’s ex-husband Reed Harris, the person Lyle thinks is behind the disappearance.

Max soon discovers how hard an investigation is without access to certain police tools, such as pinging a cell phone, things he once had at his fingertips. He is hesitant to reach out to his former partner Niki Vang, especially after the way he left her and the department, but when he can’t go forward without the resources to which she has access, he pushes down his shame to contact her. Niki, who is rightly furious at Max for multiple reasons, surprises him and is willing to help. It’s not the last time he will need her help in this search. And, Niki, a character whom Eskens has given a pragmatic personality, with a great depth of empathetic understanding, will help Max face his demons and feelings, along with aiding, on the sidelines, his pursuit of a madman.

It becomes apparent that Lyle’s instincts are right concerning Reed, the ex-husband. Readers learn early on what a monster Reed Harris is, which increases the suspense level exponentially due to a constant threat of his volatile temperament causing things to go sideways. The hunt finally takes Max and Lyle to the Boundary Waters wilderness, where Minnesota runs into Canada. Reed has fled there to cross illegally into Canada with his kidnapped cargo. Here is where the setting becomes its own character, albeit a cold-hearted one in the depths of a Minnesota winter. Allen Eskens shows an unerring brilliance at pulling the reader into this outdoor, wilderness setting. His words make you feel the chill, the isolation, the danger. Death is just one wrong step away, especially in the cold. To battle evil in this setting is to do double battle against man and nature.

Forbidden Country picks up three years after Long Dark Descending, the book featuring Max and his deed that sends him into isolation. In this fourth Max Rupert book, there are some answers and resolutions, but Eskens still leaves Max and readers struggling with the moral dilemma of justice, what it is, who has the right to decide, how it is best served, and when does justice become revenge. All of Allen Eskens’ books cause the reader to ponder human behavior, the good and bad of it, and the inbetween. In looking at the characters’ behaviors, the reader experiences self-reflection, too. Can taking a life ever be justified? This is Allen Eskens. This is crime writing at its best.

Forsaken Country is a magnificent adventure thriller, a crime novel that celebrates attention to detail. The question of reading Eskens’ books with these recurring characters in publication order is tricky, as sometimes a later book is telling an earlier story. You might want to read the four books featuring Max Rupert together, or the four with Lila Nash together. There are eight books so far that orbit around the Joe Talbert, Boady Sanden, Lila Nash, and Max Rupert universe. With Allen Eskens’ books, I think you can appreciate them in any order, but I guarantee if you read one, you’ll want to read them all. Thoughts are beginning to turn towards Christmas gifts this time of year, and I can’t think of a better gift than giving a mystery/crime reading friend a set of all eight of these books and letting them decide the order in which to read them.