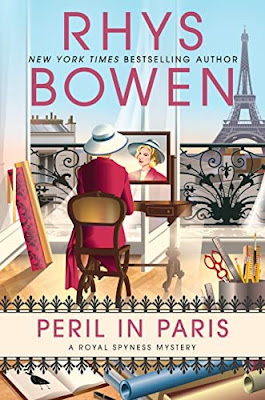 Oh, to be in Paris now that spring is here. Well, the spring of 1936 might not be the best spring to visit, although things were, relatively speaking, normal as to what they would be when the Nazis seized control in a few years. Peril in Paris takes place when the dangers of what is to come is trying to be averted by those who work undercover, behind the scenes of the beauty and thrill of a Paris spring. Peril in Paris is a title that covers so much in the story. While the Royal Spyness (Lady Georgie) mysteries have a pleasant and often humorous leaning, there is always something going on underneath that delight that involves murder and mayhem. Paris and this story could be interchangeable metaphors for one another. It’s rather like taking the good with the bad, but under Rhys Bowen’s deft hand, it’s always spellbinding.

Lady Georgie finds herself in Paris in March 1936. Three months pregnant, her morning sickness has finally subsided, and her dashing husband Darcy has asked her to accompany him to Paris. For Darcy it will be work, and certain to be spy work, but for Georgie, she will visit with her best friend Belinda. Belinda is working as an intern under Coco Chanel, furthering her designing skills and enjoying life in Paris. Since Darcy will be working, Georgie is staying with Belinda so they can better catch up with one another. However, Belinda is swamped with work for Coco’s new fall collection preview taking place in a few days. Georgie, who already knows Coco, becomes involved in the show, too, as Coco designs an elegant maternity dress for Georgie and insists Georgie model it in the show. Georgie is worried about the modeling part because she can barely walk in the tight-legged skirt, and the memories of falling on the runway in a previous modeling stint she did for Coco still haunt the expectant mother.

As it turns out, modeling the maternity dress isn't the only thing Georgie has to worry about at Coco Chanel’s show. Darcy needs her help. There is a German delegation, known Nazis and their wives, in Paris for a few days, and that delegation includes Hermann Goring’s wife and her friend, Greta Goldberg, who has a Jewish husband. That woman is trying hard not to be noticed, but she and her husband are secretly part of the effort to undermine Nazi Germany. Frau Goldberg has some documents and microfilm to pass to Darcy, but she is being constantly watched, which makes it hard for Darcy to obtain the documents. The German women are going to attend the fashion show, and Darcy must ask Georgie to take the hand-off of materials in a plan he devises. The dress and the hand-off are causing this newly pregnant Georgie quite a lot of stress, and there’s an unexpected presence that makes it all just a little harder. Georgie’s narcissistic mother, Claire, is with the German women and eager to buy some Chanel garments to take back to Germany where she is now living with her rich industrialist German fiancé. As if that weren’t enough, Wallace Simpson shows up. With Georgie’s cousin David now King, Wallace is flouting her new status as the woman who will become Queen. Of course, she won’t, and nobody realizes that more than Georgie’s mother, who has never missed a chance to put Wallace in her place.

When the murder of an American woman occurs at Coco’s show, Georgie quickly realizes that the German woman she was to receive the documents from was the actual target. Georgie is in a bad position of being in the wrong place at the wrong time, and the French detective is looking very closely at her as a suspect. There’s so much at stake now-Darcy’s opportunity to gain information that could be used against the Nazis, the German woman having a target on her back, and Georgie needing to prove she was not involved in the American woman’s death. The resolution to the murder is not an obvious one, and the hate behind it is steeped in a twisted deception.

I’m pleased with the way Rhys Bowen has brought the Lady Georgie series to the current events involving France and Germany and the UK, the years leading up to WWII. It had to be addressed because of the time frame, and this story was a perfect fit, as Georgie already had a connection to Coco Chanel, and Coco Chanel was accommodating to the German clientele who were Nazis. It was an excellent place to show the beginnings of German encroachment into French life. I’m not a fan of Coco Chanel. I think she was strictly an opportunist who cared only about herself and her business surviving, and her fraternization with the Nazis was deplorable. But again, to introduce the stirrings of a world that was rapidly moving towards war needs a stage that touches upon the disbelief that an iconic city like Paris will change. Chanel’s showing of her fall line in spring represents the expectation that life will continue as usual, with the Nazis mostly an annoyance.

The challenge the author faced of keeping the charm of this series alive while an unprecedented dark cloud hovered was a hard one, but Rhys Bowen was able to do just that. Lady Georgie is Lady Georgie, and her personality and less serious problems are going to be there, even amidst the world changing. I was still able to enjoy the essence of Georgie and Darcy, their relationship and their smaller world. Daily life does go on in a vacuum of sorts, but, of course, at this time in history, all the characters’ lives are facing major shifts when daily life shares in common all too many hardships. I heartily applaud Rhys Bowen for the transitions she has successfully started for the coming war. Peril in Paris is a book that is going to appeal to a wide range of readers, and although there are some nuances between characters that might be missed, I think this book can be read as a fascinating stand-alone. Well done, Rhys Bowen.