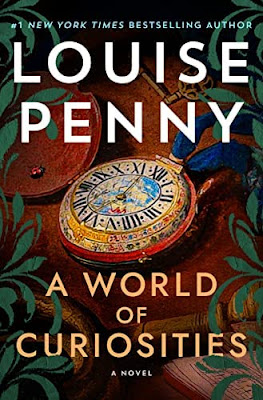 “He held the younger man’s eyes, inviting him to set aside for a moment the great brutality that existed and to remember the acts of greater courage.  Of integrity and decency.  Of self-control.  Of forgiveness.”

I have to confess that the beginning of A World of Curiosities was a hard read for me.  The subject matter of the child abuse, sexual abuse, distresses me.  I was tempted to quit reading, but it came down to a matter of faith in Louise Penny’s stories, in her ability to tell the horror of something with hope, of making the look at evil have meaning.  I knew she had something important to tell me, and it’s the repercussions of the abuse that figure into the story.  It’s not a book focusing on the abuse or even describing the abuse.  Only the evidence that something had occurred is there, not the occurrence.  So, I continued to read, and it won’t surprise anyone who has read this book or read any of Louise’s books that I made the right decision.  Louise Penny digs deep into the darkness to shine a light on it, exposing it and knowing it can’t be ignored, just as she has created Armand Gamache to do.

What so many Chief Inspector Gamache fans will be very happy with is that we finally get a front row seat to Armand Gamache finding Jean Guy Beauvoir in the basement of a Surrette detachment station and bringing him into the light of day and the heart of an investigation.  (Nobody uses dark and light better than Louise Penny.)  Their first meeting could have easily been the last, but Gamache sees past  Beauvoir’s surly behavior, at his observational skills and passion to get things right.  Inspector Gamache has been called from Montreal to a desolate place where Lac Plongeon sits, hours northeast of Montreal.  A dead woman has been discovered in a shallow part of the lake, who carries pictures of herself and her two children in her wallet.  The identification is easy due to a driver’s license and her reputation around the small town as a prostitute. Delivering the news of her death to Clotilde Arsenault ‘s children, Fiona, 13, and Sam, 9, Gamache discovers that the children have been left alone for the few days after their mother was reported missing, and he is outraged by this oversight of the surette officer in charge at the detachment station.  This oversight is only the first and least of the outrages Gamache and his team will uncover in this case and at the detachment.  By the end of this visit to the past, Jean Guy Beauvoir has become a member of the homicide team out of Montreal.

“It seemed like a coincidence, but in Gamache’s experience, almost everything that happened was the end result of a series of apparently unconnected events.  Often set in motion years earlier.  Remove one, and the thing did not happen.” Repercussions and reverberations.  Interspersed into the narrative about Gamache’s and Beauvoir’s first case together is the current timeline.  We join Armand and Reine-Marie Gamache as they prepare to attend a graduation ceremony of some personal significance in Montreal at the École Polytechnique, an engineering school.  Fiona Arsenault, the girl who was one of the two abused children in the pivotal case for Gamache and Beauvoir, has earned her engineering degree.  It is due to Armand Gamache’s intervention that Fiona Arsenault has been able to attend the classes and obtain her degree.  Armand and Reine-Marie have served as sponsors for her and are happy to see this day arrive.  Harriet Landry, the niece of Three Pines’ bookstore owner and former psychologist, Myrna Landry, is also graduating this day.

Another person being honored this graduation is a special friend of Armand’s, Nathalie Provost, who, thanks to Armand, survived the Montreal Massacre, where fourteen women were killed and thirteen women were injured at this school, a tragedy born from the malevolence of misogyny.  It was the day that Armand Gamache decided to make homicide his path of service in the Sûreté du Québec.  It’s an emotional day, but a day to celebrate, and Three Pines is doing so with a community-wide party.

Unfortunately, Sam Arsenault, Fiona’s younger brother shows up for the graduation and for a stay-over in Three Pines, which concerns Gamache.  Gamache has seen the evil emanating from Sam Arsenault as a child, and as a young man, he hasn’t changed.  Sam appears charming to others, but Gamache had him pegged when encountering Sam that first time.  Sam knows this and hates Gamache for it.  Seeing Sam again after all the years since his mother’s murder, brings sharply into focus how that level of malevolence works its way past Gamache’s barriers in his mind and preys upon him.  Only Sam and the serial killer John Fleming have been able to get inside Gamache’s head.

Things are about to get twisted in Three Pines.  Myrna and her significant other Billy would like to move in together, so they are looking to either move from her bookstore or miraculously make more space there.  A letter from Billy’s stonemason ancestor that comes into Billy’s possession reveals another room in Myrna’s house/bookstore, a room that has been bricked up since 1862.  Upon opening this space, a huge painting greets those present, a copy of the famous Paston Treasure, also known as A World of Curiosities, with its many depictions of objects found in the time of the 1800s when it was painted.  However, this modern copy of the painting includes items found in current times.  As murder and other unsavory events start to occur, the painting is studied by Gamache and his team, as connections between objects in the painting and events emerge.  A deadly game is underway, and no one has more to lose than Chief Inspector Armand Gamache.

No review would be complete without comments about the characters whom we readers of this series have come to love over 18 books.  Fans of this series know that the characters are second to none in their development and reader investment.  They have become friends, those friends whom we don’t see every day, but when we see them again, we pick up right where we left off.  Armand, Jean Guy, Reine-Marie, Annie, Ruth, Clara, Myrna, Gabri, Olivier, Isabelle, and Billy, share their thoughts and emotions with us, and we are buoyed by the community attachments they’ve all formed.  Even crotchety old Ruth with her cursing duck inspires us.  Of course, Ruth’s poetry quoted throughout the book and often by Gamache is moving and memorable.  Technically, Jean Guy and Annie and their children and Isabelle don’t live in Three Pines, but the people who do live there readily adopt them as their own. The magic of Three Pines is the characters who “All having discovered a village only ever found by people lost” gain strength from each other and discover the best of themselves.  And, as we read the heart-warming scenes of the meals they share at one another’s homes in Three Pines, we gain strength from such, too.

The newest character to Gamache’s homicide team is Amelia Choquet, who readers first encountered in A Great Reckoning (#12) where she was an unlikely cadet in the Sûreté Academy.  Amelia is still tattooed and unconventional, but she has shed the anger which consumed her then and become a trusted member of the team.  Armand Gamache is a great giver of second chances, and he has once again struck it rich with Amelia Choquet.  Louise Penny is purposeful in showing the value of people who might otherwise be discarded by society.  Hopefully, readers carry that message into life with them.

A World of Curiosities is a story of increasing danger to Gamache and his family, both those related and others in his circle of care.  It is a journey of frayed nerves and horror-filled expectations.  A World of Curiosities is by far the most suspenseful book I’ve read this year, and it goes to top of my list now when recommending suspense reading.  Edge of the seat sounds so trite, but that phrase seems to have been made for this book.  The nefarious, twisted forces trying to destroy Gamache have no boundaries of evil, and the worst seems inevitable. Tears will likely be waiting to spring. This may be Louise Penny’s best book yet, and with seventeen previous solid-gold hits, that’s saying something.

Thanks to Minotaur Books for an advanced copy of A World of Curiosities.