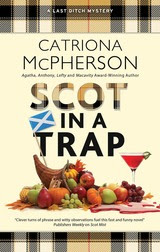 Just in time for Christmas giving, to yourself and others, is the publication of the fifth book in Catriona McPherson’s The Last Ditch Motel series, Scot in a Trap.  Inserting humor into a murder mystery successfully takes some skill, and this author lets the main character, Lexie Campbell, just be herself to achieve this.  You might say it’s an organic sort of humor, one shared by both the character and the author of being Scottish and living in the United States.  Lexie is still learning the difference between how things work in America as opposed to Scotland.  For example, you don’t call a newborn baby ugly in America, whereas in Scotland, it’s perfectly acceptable to note that there are flaws in the wee one.  Scot in a Trap is set in 2021, when the country is still suffering from the effects of Covid, but many of the restrictions have been lifted.  The continuing presence of Covid has its effect on some of the actions the characters take, but the pandemic is not a focus.

Thanksgiving Day is, of course, that uniquely United States holiday where the food is all too often embarrassingly abundant, and families gather, whether they should or not.  Therapist Lexie Campbell has adopted the quirky characters who live full-time at the Last Ditch Motel in Cuento, California as her family, and so it is this community of unlikely friends who gather for the big Thanksgiving dinner.  Lexie is still acclimating herself to her American surroundings, and she is stunned that the communal dinner for the residents has at least seven pies on offer and not one of them with meat and gravy in it.  Her suggestion to cut up some pears to include a lighter choice is not met favorably by Noleen, the owner and operator of Last Ditch Motel.  This Thanksgiving is a day of waiting, too.  Della, another full-time resident, is past her due date to have the baby that she and Dylan are expecting.  The couple are staying on Lexie’s houseboat because they want a home birth, not wanting to go to the hospital where Covid is still monopolizing the health care system.  But, Thanksgiving dinner and its many pies, so many pies, is uninterrupted by a birth, sending the Last Ditch community off to bed with full stomachs and continued anticipation.

Lexie is awoken in the middle of the night by a strange sound, and her fiancé Taylor isn’t any help with recognizing it either.  The mystery sound is followed by the unmistakable sound of a baby crying.  Della has had her baby and there’s a mad dash for Lexie’s houseboat.  Diego, Maria’s son, names the new baby girl Chihiro, and everyone gushes over her.  Well, everyone gushes except Lexie, who manages to stick her foot in her mouth by mentioning the baby’s birthmark on her forehead.  On the way back to their rooms, Lexie admits to the others that she wasn’t impressed with the baby’s appearance, which ends up earning her the disdain of the group and early morning breakfast service to the only guest they have at the moment.  Lexie takes her punishment well.  How hard could scrambled eggs and toast be?

Well, the fixing of the breakfast that Lexie has to deliver to the motel’s only overnight guest is the easy part.  The discovery that the man who ordered the breakfast is lying in his bed with a bullet hole in his forehead is a little more complicated.  The fact that the dead man is Lexie’s first true love from Scotland, the true love that dumped her years ago, is a lot more complicated. Lexie hasn’t set eyes on Menzies Lassiter for close to twenty years before finding him resting in permanent peace at the Last Ditch.  While Lexie and her friends wonder if it could be suicide by a man who was riddled by guilt about his previous actions toward Lexie and other women, Sgt. Molly Rankinson doubts a bullet in the middle of the victim’s forehead means anything other than murder.  But, what connection does he have to the United States other than Lexie.  Yep, Lexie, who has opportunity and possible motive.  And means?  Well, that shows up later.  Our Lexie is not one to sit around fretting and waiting for the handcuffs to be clicked on.  She will go all out to prove her innocence, even dumpster diving.  She is the only one who has all the pieces to put together for a resolution.  However, proving her innocence will mean acknowledging some truths that Lexie has avoided for many years.

The Last Ditch Mysteries are a brilliant work of hilarity and substance.  What drew me to this series was the guffaw factor, a chance to read the hilarious adventures, or misadventures, of a delightful Scottish character who comes to America after a whirlwind romance with a dentist from California and finds herself divorced and with no home.  The authenticity of this scenario is guaranteed, as the author herself found her way from Scotland to California to live, and who is one of the funniest people I know (but not divorced and has a home).   But, as I’ve noted in reviews of earlier Last Ditch books, Catriona McPherson shows readers what is important in living their best lives with her stories in this microcosm of the world called Last Ditch Motel.  She infuses humor into a message of acceptance and compatibility between people of vast differences.  However, McPherson isn’t through yet.  She also manages to present a murder to be solved that is entwined with an important issue, such as misogyny or sexual abuse.  So, you read these books laughing (or guffawing as I just pointed out) at the witty dialogue and Lexie’s unique observations and the offbeat characters, but you gain insight you weren’t expecting, too.  Catriona McPherson is one clever author, and Scot in a Trap is one must-read book.

I received a book from the author and Severn House, and my review is an honest and unbiased one.