Murder in All Fury (Acton and Doyle #16) by Anne Cleeland: Reading Room Review 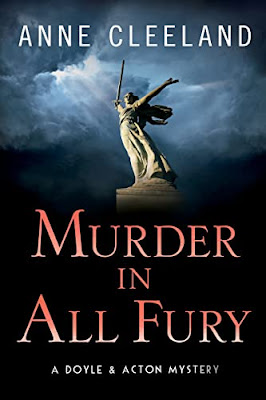 “Vengeance was in his blood, along with wrath, and pride, and all those other very questionable medieval urges.”

Acton and Doyle have taken a vacation, something unheard of for them, to the seaside to allow Kathleen some relaxation after the birth of their new son Tommy.  It’s a good trip for first son Edward to burn off some of his energy, too, going to the sea and playing there.  Of course, events happen to catch the attention of Lord Acton, such as a fire at the nearby marina and the death of a well-known actress there. Acton as Chief Inspector with the Met is asked to consult on the fire and death.  Mary, Edward’s former nanny and a recent widow, comes to spend a few days with Kathleen toward the end of their stay.  The housekeeper, Mrs. Macky, seems quite taken with Mary and her daughter Gemma, paying little attention to the lady of the house who employs her.

Getting back to London is a relief for both Kathleen and Michael.  The trial for the murderer of Mary’s husband, Nigel Howard, who was an MP, is soon to be underway, along with the other fentanyl murders. Although it is supposedly a cut and dried case, Kathleen is receiving ghostly visits from Mary’s husband saying otherwise.  Someone is slipping the knot of justice in this killing, and Sir Howard wants his death avenged and Mary protected.  And, Kathleen is puzzled at the ghost’s repeated comment that he is not sorry he’s dead.  With Acton also believing someone has escaped due justice, he’s involved in obtaining vengeance for Mary’s husband behind the scenes, as Acton is wont to do.

Of course, Acton is usually pulling strings and doing his secretive stuff, and Kathleen is trying to figure out Acton’s contrivances and keep up with them.  It’s such a great part of this series, watching Acton’s and Doyle’s interactions and conversations as they work toward the same goal in their different ways.  They are both seeking to ensure the responsible parties pay for the death of a good man.  Kathleen is worried that this particular case is twisting Acton into way too many knots, and she, as Kathleen is wont to do, is determined to save him from himself.  “But, you’re brimful of wrath, Michael, and it’s blindin’ your judgment.”  What finally is brought to light will end up surprising both Acton and Doyle.

The characters of this series are some of my favorites in reading. Acton and Doyle are the perfect mismatched couple, complimenting one another with their differences in background and life views.  Kathleen Doyle isn’t afraid to admit she needs a clearer understanding of some words and allusions, but she is brilliant at putting together the puzzle that is Acton.  The love and warmth they bring to one another’s lives is life affirming in its depth. And, that both Acton and Doyle are on the police force gives them lots of common interests. The characters of Thomas Williams and his wife Izzy and Mary and her daughter Gemma enrich this story, as they do all stories in the series.  The enigmatic Phillip Savoie looms large and baffling, and Mary is being watched over very thoroughly by Phillipe Savoie, who is meeting all her needs and then some.  The always faithful, steady Reynolds expertly runs the household, but he defers to the Lady and Lord as any good English servant would.  Anne Cleeland never disappoints in bringing to life these creations of hers.

I so thoroughly enjoyed Murder in All Fury.  It’s one of my favorite ones in the Doyle and Acton series.  I enjoy all the books in this series, but this one really stands out for me.  I think all the Doyle and Acton fans are going to be exceedingly pleased with Murder in All Fury.  And, I do think that it could be read without reading the previous books because the plot is more linear than some in the series.  Of course, anyone reading any book in this series out of order is going to want to read them all.