Where the Guilty Hide by Annette Dashofy: Reading Room Review 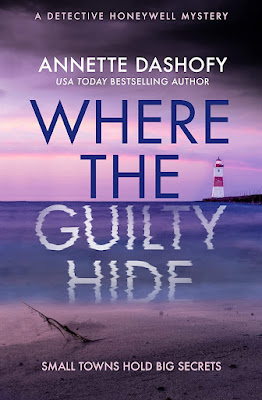 Annette Dashofy has been busy.  She already has a highly popular series in the Zoe Chambers series, set in the author’s familiar Pennsylvania countryside but in a fictitious place.  Count me in the avid fans of Zoe Chambers.  She has a stand-alone, Death by Equine, published in 2021, which was not only well received by readers but also won the Dr. Tony Ryan Award last fall.  And now Annette Dashofy has created another series, the Detective Matthias Honeywell Mysteries, and Where the Guilty Hide is Book One.  Readers, who are devoted to an author’s long-running series, are always a bit anxious about their beloved author starting a new one.  Let me quell that anxiety.  The elements that have made the Zoe Chambers series successful are alive and well in this new series.

Erie, Pennsylvania has seen its second home invasion in less than a week.  The second one occurs in a wealthy neighborhood in a house that has Lake Erie at its back end.  Unfortunately, this time the homeowner gets loose from his ties, and follows the thieves’ van in his car.  Detective Matthias Honeywell and his partner Cassie Malone arrive at the scene to find a distraught wife, Barbara, and two shaken-up teenagers.  The homeowner doesn’t return home and is considered missing.  His car is found empty in a lot, and while there are clues that Wesley Simmons was taken from his vehicle, there are no clues as to where he has been taken.

Emma Anderson has come to Erie to hide and to find her drug-addicted younger sister.  Emma is a freelance photographer and is temporarily living in a camper at the local campground.  An assignment takes her to the beaches along Lake Erie to photograph kite fliers.  The day she goes is too overcast for the kite fliers to be out, so she takes pictures of the storm waves and driftwood.  One large pile of debris from the ocean catches her eye, so she photographs it, too.  When she returns to her car and looks at the photos on her laptop, she is shocked to see a human arm sticking out of the large debris pile.

Matthias and Cassie are called to the scene at the beach, as the body is a male who might be their missing homeowner.  It is, and Wesley Simmons did not go easy into that dark night.  The detectives now have a homicide to investigate, and readers will follow an engaging police procedural that shows the steps taken in the investigation and the adding up of evidence to reveal the guilty.  It’s a laborious process that speaks to the character of Matthias Honeywell, as his relentlessness to uncover who is doing the home invasions and who committed murder shows a man dedicated to his job and community.

As coincidence would have it, Emma’s neighbor Joe turns out to be Barbara’s father, and Wesley Simmons’ father-in-law.  The two men did not get along and Joe’s relationship with his daughter is fraught with turmoil, too.  Emma seems to be caught in the middle of all that’s going on, being at the wrong place at the wrong time.  Whether this is accidental or connects her to the criminal activity is what Matthias must determine.  The home invasion death won’t be the last, and the time to solve the cases will become shorter and shorter.

I’m so glad that Annette Dashofy has added to her already extraordinary body of work with this new series. The cast of characters are relatable and full of interesting back story that readers will want to know even more about. The plot takes some unexpected turns that made me truly admire the author’s control of the story and its outcome.  Dashofy knows where the story is going, enabling the reader to keep on track, too.  The fast pacing keeps the suspense building and kept me turning the pages.  And, the new setting of Erie, Pennsylvania on Lake Erie allows the author to stretch her well-honed talent of descriptive writing.  She knows how to describe a place to make it a vivid image, but she also knows not to make description a superfluous barrage.  It’s with great pleasure that I highly recommend the Detective Honeywell Mysteries series and its first book Where the Guilty Hide.  The next book can’t come soon enough.

I received an advanced copy of Where the Guilty Hide from NetGalley and HarperCollins.  I’ve provided my honest review.