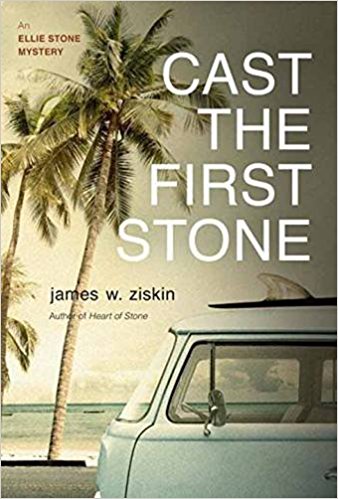 Hooray for Hollywood!  The early 1960s was the end of the Golden Age of Hollywood, where big studios ruled and the “star system” determined who would be featured in movies and publicity.  It was also a time of projecting a certain image that was “clean” from any “undesired” behavior of associations.  The image could make you or break you.  Why all this talk about Hollywood in an Ellie Stone review?  Well, that’s because Cast the First Stone, such a clever title for many reasons for this story, is set in Hollywood.  Discovering those reasons is discovering the essence of the novel.  In the fifth entry into the series, our Ellie finds herself transported from small-town New Holland, New York to the fast-paced thrills of Tinseltown, where the glitter and the glam are often just a sham.


Former hometown boy and high school drama star Tony Eberle is on the cusp of Hollywood fame, with a co-starring role in a new summer beach movie, and Ellie’s editor sends her to get an interview with Tony and provide the paper with a scoop on their local celebrity, a much-needed boost for their economically suffering community.  However, when Ellie arrives at the Paramount Studios lot to conduct that interview, Tony is a no-show, and nobody seems to have a clue to his where-abouts.  Of course, Ellie is determined to do the job she was sent to do, so she sets out to find Tony, interview him, and get him back to his job and acting career.  Concerned that Tony’s career might be over before it begins, and her own career in its constant dangle, Ellie knows that time is critical.  She is not the only one concerned with damage control.  After all, it is Hollywood and damage control is part of the game.


One of the last places that Tony was seen was at the producer’s house attending a party, a party at which homosexuality was the open secret, where movie roles were rewards for sexual favors, but where denial of conduct was paramount to survival.  Ellie is no stranger to discrimination, being a woman reporter in a male dominated career and being just being a woman in the early 1960s.  But, even as she confronts and condemns the sexual discrimination of the movie studios and the L.A. police, Eli is conflicted in her feelings that Tony could be gay, with her mind not having quite caught up with her heart on the matter.  That author James Ziskin doesn’t shy away from her uneasiness lends authenticity that readers have come to expect from this series


The situation of the missing Tony quickly escalates as the producer of his movie, Bertram Wallis, is found dead outside the producer’s lavish Nichols Canyon home.  The police, who want a solution to what is determined murder as quickly as the movie studio does, are only too happy to put Tony’s disappearance and Wallis’ murder together for an open and shut case.  Now finding Tony has become a matter of life and death, and Ellie isn’t sure who to trust in a town of smoke and mirrors.  She does finally enlist the help of a fellow reporter and a photographer, but it’s a play by play alliance.  The studio liaison/studio president’s assistant/power behind the throne named Dorothy Fetterman convinces Elly to collaborate, too, in finding, or rather, holding on to Tony, but that alliance is on shifting ground.  It is a wild and twisted ride through the façade that is Hollywood, and Ellie will have to be especially fearless and clever to find the answers to Wallis’ murder and Tony’s vanishing act.


James Ziskin has once again constructed a tale that brings alive the early days of the 1960s decade in a convincing and spellbinding fashion.  Ellie Stone is the driving force behind the action, and her fluidity and adaptation to her job and to the times are a part of the authenticity and intrigue.  She is, in short, maturing as the stories continue.  Although Ellie still enjoys her Dewar’s White Label Scotch whiskey, she seems to be controlling her excess of it, deferring to the demands of her job.  This book was a book of firsts for Ellie in certain areas, and she assimilates the additional information with the fairness and wisdom she is continually building upon.  Her first trip to a gay bar, her first flirt from a woman, and her first recognition that sometimes a byline isn’t the most important part of story.  James Ziskin’s presentation of the brutality visited upon the gay community in the early 60s and the false life they were forced to lead is a major part of this book’s success.  And, as always, Ziskin nails the 60s setting with references to that era, cementing the story’s power to connect.  Casting the First Stone is so well written, and the best praise I can give it is to say that it is as excellent as all the other books in the series, and they are all brilliant.


I did receive an advance copy from the publisher, and it was instrumental only in facilitating my early reading of the book for review.