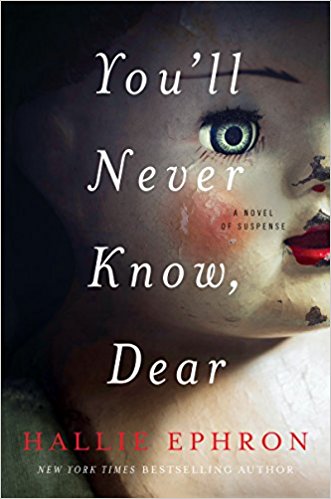 Just one glance at the book cover for You’ll Never Know, Dear by Hallie Ephron and you will know that this tale is going to grab you.  An old doll with a chipped face, eerily brought to life with that staring blue eye, those ruby red lips, and that touch of rouged cheek promises that there are hidden depths of buried secrets to discover.  And, as the old doll indicates, the story starts in a time long past.

Lissie Woodham and her sister Janey were seven and four respectively when Lissie left her little sister to chase after a passing puppy.  When Lissie returned to their yard, Janey was gone, along with Janey’s porcelian doll, which her mother had made for her.  Exhaustive searches and police investigations turned up nothing.  It was as if Janey vanished into thin air, and Lissie never forgot it was on her watch.

Forty years later, Bonsecours, South Carolina is much the same for Lis Woodham, who still lives in the same house in which she grew up, with her mother, referred to as Miss Sorrel by all, even Lis. Lis had briefly left Bonsecours as a young woman, but she returned after a divorce, to bring up her own daughter, Vanessa.  Vanessa is a college student in the Northeast, so Lis runs the family boating business, while Miss Sorrel, retired from making dolls, has turned to repairing old dolls. Miss Sorrel’s tradition of placing an ad in the newspaper on the anniversary of Janey’s disappearance continues, an ad offering a reward for the porcelain doll bearing Janey’s likeness.  The reward is now up to $5,000.  Lis no longer hopes for a legitimate response, but Miss Sorrel still expects one to be the actual doll.  So, when a woman named Maggie brings in a doll that Miss Sorrel recognizes as Janey’s, there is renewed hope for an answer as to what happened to Janey.

Of course, with renewed hope comes renewed danger, as someone doesn’t want the questions about Janey’s disappearance answered.  When Vanessa, Lis’ daughter, receives a call from their neighbor and long-time friend Evelyn that Lis and Miss Sorrel have been in an accident in their home involving carbon monoxide and are in the hospital, Vanessa leaves for her southern home to help.  That help will become a much-needed aid in discovering who would want to harm Lis and Miss Sorrel to keep past secrets in the past.  The suspense builds as each clue uncovered leads to more answers, but also more questions and danger.  Could Janey still be alive, or is the porcelain doll the only survivor of that tragedy?

Hallie Ephron is a master at building suspense and keeping the reader on the edge of the seat.  I wanted so badly to be able to read faster while reading this book, and, yet, I wasn’t sure I wanted to know how it ended.  Triumph or more tragedy?  Ephron knows how to twist it and turn it so that the reader is fully engaged and invested.  It is possible to discover who the culprit is before the end of the book, but even with that, you won’t be expecting what comes at the end.  And, readers will delight in how superbly Ephron captures the essence of the South in the characters and the setting.

I was indeed fortunate to receive a copy of You’ll Never Know, Dear from the author, and I have reviewed it with honesty and exacting standards.
Posted by Kathy Reel at 10:07 AM