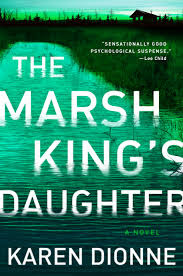 There are parts of this story that are hard to read, but any story that has its origins in a brutal kidnapping of a young teenager is not going to be a pleasant tale.  And, the events and feelings being narrated by the daughter born into the circumstances of the kidnapper raping the mother is going to deal with complex and disturbing issues.  That the daughter of that unholy union didn’t know her father was also her and her mother’s jailer until the daughter was twelve contain memories that to her were “normal,” but to others are untenable.  Living isolated in a wilderness where animals are hunted and survival of the fittest is in constant play makes for some uncomfortable moments, too.   But, again, this is not a story with which you are supposed to be comfortable.  The narrator is a survivor of an unimaginable situation whose demons in the form of her violent father come back to haunt her in the flesh when she is in her late twenties and has a family of her own.

Helena Pelletier is the daughter of her mother’s abduction, and she has miraculously managed to move past the trauma of her younger years and is now married with two young daughters and living in the Upper Penninsula of Michigan. The trauma has not left her without scars, but she is grateful for her life of normality and the love of her family.  Then, her father, Jacob Halbrook, the man who ruined her mother’s life and twisted hers breaks out of prison, killing two guards.  The manhunt for this dangerous criminal is centered where the clues lead, but Helena knows her father deliberately left those clues to throw the police off the track of where he’s really headed.  And, Helena, who knows this man better than anyone, knows he is headed for her and her family.  Having learned tracking and survival skills at her father’s knee, she also knows that she is the only one who can recapture him.

The reason I found this book fascinating is that we are given insight into how a child born into such a disastrous situation thinks, or how she comes to process and accommodate her past into her present and future.  The author uses alternating chapters of Helena’s past and present to acquaint readers with the years Helena spent as a daughter unaware of her parentage origins.  While we see the man who fathered her as a monster, an object of disdain, Helena’s perception is colored by the isolation of living in a wilderness and not knowing any other example of what families were until she was twelve and loving a father who taught her everything she knew.  To say her feelings and thoughts are outside of most people’s realm of relevancy is an understatement.  But, this story presents a perspective that is important to consider when our “normal” isn’t someone else’s.

Karen Dionne tackles this difficult subject matter with a directness that doesn’t avoid the ugliness or discomfort of the story.  Life is scary and cruel and unfair in a world where a young girl is kidnapped by a narcissist and gives birth to a child.  That child deserves to tell her story like it was and is, without any sugar coating.  Dionne’s description of the UP of Michigan was an educational one for me, as I’m completely unfamiliar with that area.  The description of the marshland where Helena grew up shows both the beauty and the harshness of its isolated setting, a metaphor for Helena's life there.  The use of Hans Christian Anderson’s fairytale The Marsh King excerpts at the beginning of Helena’s early years chapters serves as the allegory for good vs. evil in man’s nature, begging the question which is stronger, and more specifically which is stronger in Helena.

The Marsh King’s daughter is a book that will haunt you, but it is also a book that will keep you completely engaged in its uniqueness and well-paced plot.  The characters are presented in all their rawness of culpability and trauma, but the examination of a mind and a person who must overcome disturbing origins to emerge as an accepted member of society is a harrowing story worth experiencing.