Today's selection for Throw Back to my reading is The Daughter of Time by Josephine Tey.   It was an important book for me historically, as well as introducing me to Josephine Tey's writing.  In English history, King Richard III is a controversial figure.  Although Richard III only ruled for two years, his reign is rich in historical significance.  With his death on August 22, 1485, the Plantagenet dynasty and the Wars of the Roses both came to an end.  There is the persistent story of how he killed the two princes in the tower to make his rule secure.  To this day, there are strong feelings about whether Richard murdered his nephews and was a bad person or whether he was egregiously slandered.  After reading The Daughter of Time years ago, I became a staunch supporter of Richard III and his innocence.  Of course, the fictional book did for me what all good reading does, it led me to more reading about the subject matter.  It's a short book, and I highly recommend it. 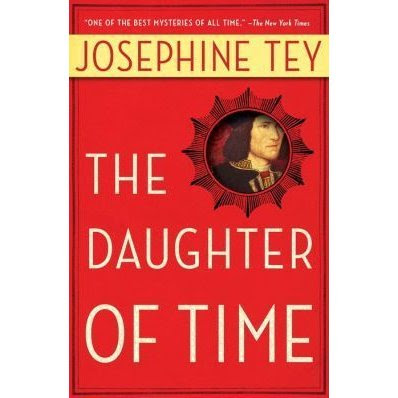 Book Description:
"One of the best mysteries of all time" (The New York Times)—Josephine Tey recreates one of history’s most famous—and vicious—crimes in her classic bestselling novel, a must read for connoisseurs of fiction, now with a new introduction by Robert Barnard.

Inspector Alan Grant of Scotland Yard, recuperating from a broken leg, becomes fascinated with a contemporary portrait of Richard III that bears no resemblance to the Wicked Uncle of history. Could such a sensitive, noble face actually belong to one of the world’s most heinous villains—a venomous hunchback who may have killed his brother’s children to make his crown secure? Or could Richard have been the victim, turned into a monster by the usurpers of England’s throne? Grant determines to find out once and for all, with the help of the British Museum and an American scholar, what kind of man Richard Plantagenet really was and who killed the Little Princes in the Tower.

The Daughter of Time is an ingeniously plotted, beautifully written, and suspenseful tale, a supreme achievement from one of mystery writing’s most gifted masters.
Posted by Kathy Reel at 11:23 PM