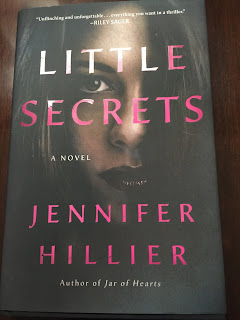 Impact.  That’s the word I would choose if I had to choose but one word to describe a Jennifer Hillier novel.  I just finished reading her latest book, Little Secrets, and once again I felt the impact.  It’s a realization that the world in which you think and live is smaller than you think, and here is a way you probably haven’t looked at things before.  A famous quote that covers Hillier’s writing is when Hamlet says to Horatio, “There are more things in heaven and Earth, Horatio, than are dreamt of in your philosophy.”  It’s good to have your horizons broadened and challenged, and reading is always a great way to do that.  But, some reading has that impact of challenging you and changing your perceptions with a gasp of realization.  Little Secrets digs deep inside the human psyche of its characters, which, in turn, causes the reader to dig deep into their own.

Marin Machado has it all.  Wealth, her own business of three high-end beauty salons, a successful and handsome husband, good friends, and a beautiful four-year-old son named Sebastian.  She isn’t impressed with her advantages or with her own good looks and style. She is generous and caring, a good person, someone who has worked hard to be where she is.  She and her husband Derek have the respect and admiration of their community in Seattle.  Then, the unthinkable happens to shatter their world.  Three days before Christmas, Marin and Sebastian are at the crowded local mall as she tries to finish up on the last gift she needs to buy while dealing with a tired little boy who just wants to go to the candy store.  Fielding a phone call from her best friend Sal and then a text from her husband, Marin lets go of Sebastian’s hand for just a few seconds.  And, he vanishes.  Cameras later reveal Sebastian exiting the mall toward the parking garage with someone dressed like Santa.  The trail ends there, and after a month of no new leads, the FBI takes the case off its priority list.

Fifteen months since the worst day of her life, Marin has finally returned to work part-time, but it’s a flexible schedule due to her reliable, capable manager Stacy.  Still unable to sleep without pills and trying to just get through the day, Marin is a shell of the vibrant woman she was before Sebastian was taken.  She does go to therapy, although she’s not a fan of it.  Her support group for parents with missing children, with only a few other members, is more helpful to her than anything else.  Derek doesn’t attend the support group.  In fact, she and Derek barely speak, each living their own diminished lives in the wake of their tragedy.  She speaks more to her friend Sal, who checks on her every day, than she does Derek.

Marin does maintain some flickering hope that she will discover what has happened to her son.  When the FBI had to move on from Sebastian’s case, Marin hired a private investigator, Vanessa Castro, an ex-police officer who has dogged determination in her work.  Marin has not confided in Derek that she hired Castro.  Little secret, but understandable, right?  While working Sebastian’s case, Castro uncovers that Derek is having an affair with a twenty-four year old barista named Kenzie Li, and has been for six months.  Bigger secret.  When Marin receives this news, she is furious, and her anger starts to guide her decisions and actions.  She knows, but Derek doesn’t know she knows.  More and more secrets, and ones you never see coming.  Marin is determined to not lose any more than she has already.  Now, the reader gets a close look at not only the thought processes of grief, but of revenge.

The story is told from the perspectives of the two women, Marin and Kenzie, with Marin having more stage time.  While readers will be fascinated by the psychology of Marin’s despair, it’s also intriguing to look inside the mind of Kenzie and see where she’s coming from, her survival mindset.  And, if you think those are the only two minds and actions examined, you’ll be astounded by more.  It‘s a psychological thriller at its best and most complete.  Marin is always the main character, but she doesn’t exist in a vacuum and neither does the story.

When I read Jennifer Hillier’s Jar of Hearts last year, I said a most satisfactory “Wow” after I finished it.  Seldom had I been as challenged to see an event from the mind of a participant in a crime and understand it.  Now, I’ve finished Jennifer Hillier’s Little Secrets, and I find my understanding once again stretched. And, it’s not just with the major characters. This author brilliantly lets the light shine in the tiny cracks as well as the wide, gaping holes. You will feel like you’ve examined yourself, in a good way, from reading Hillier’s writing.  It’s quite possible you will be a more empathetic person.  I am, of course, highly recommending Little Secrets to others.  Readers don’t want to miss this powerful story.
Posted by Kathy Reel at 9:18 PM