Rules for Being Dead by Kim Powers: Reading Room Review 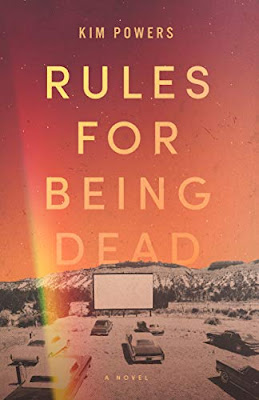 In reading, there are some titles that catch your eye, and then there are some titles that cause your head to spin around and grab the book. Rules for Being Dead by Kim Powers is just an exceptional title, and the story within lives up to the excellence of the title. There’s also the cover of this book that had me waxing nostalgic, with the black and white picture of a drive-in in probably the 1960s, the setting of the story. There’s an old black and white movie quality to the photograph and an orange sky, with a streak of what looks like either a streak in an old film reel or the last streaks of daylight, which is when the drive-in movies were gearing up to start. For me, it brought up a metaphor of riding off into the sunset, which is basically what the drive-in movies have done, along with the 60’s and all of its glorious movies and changes. For a reader who grew up in the 60’s the pull of all these elements is irresistible, and for those without the nostalgic connection, the book has lots of other pull. Who doesn’t wonder about the afterlife, or if there even is one? Can you still see your loved ones you left behind? Can they see you, hear you, feel you? And, how do young children, who already must handle the challenges of growing up, survive the loss of a parent? How does the other parent provide for the emotional needs of children in this situation, especially when that parent isn’t a great role model and struggling himself? What if the trust is so damaged between the children and the living parent that there may be no way back? Families all have their own dynamics, even when dysfunctional, and when that includes a dead, hovering ghost of a mother, it can get interesting, and in Rules for Being Dead, it does indeed.

Ten-year-old Clarke Perkins of McKinney, Texas is a big movie fan, and has enjoyed going to the downtown theater with his seven-year-old brother Corey and their mother Creola. Watching the first-run of the 1960s greats, such as My Fair Lady, 007, and Alfie give Clarke a view of the best and worst of adulthood, but he loves the adventure of them and loves sharing it with his mother. However, his mother is found dead in her bed, and Clarke suddenly must figure out life for himself and his little brother. His father is ill-equipped to deal with a child whose knowledge far extends its understanding, and father L.E. has a drinking problem threatening to destroy what’s left of his family and himself. Added to the fray is the unknown surrounding Creola’s death for her sons. No one seems interested in telling them how their mother died, so Clarke decides it is up to him to uncover the secrets and person responsible. As he gathers his evidence against the person whom he deems guilty, it is often fueled by the imagination of a young boy with a rich history of big-screen storytelling.

Hovering over all the live drama is Creola, dead as a doornail, but caught in an In-between where she can see and hear everything going on with those living from her vantage points of the tree across the street, the rooftops, and the school where she taught. But they can’t see or hear Creola, so she is as adrift as Clarke in trying to gain some answers, such as how she died. She must piece together fuzzy memories of her last days and death, too. She is cognizant of the unhappiness of her marriage, and as she lingers betwixt and between, more of her husband’s unsavory behavior comes back to her, along with memories of some strange behavior from herself.

The story is told from multiple viewpoints, with the majority being in alternating chapters of Clarke and his mother. Clarke continues to attend the movies with Corey and carry out his investigation into his mother’s death, while he is dealing with his own growing pains. Creola takes readers through her life, her marriage, and her mothering to discover how she ended up dead. L.E., too, has interjecting chapters in which the reader is given a look at this seemingly irredeemable father who causes so much heartache. Two supporting characters are also given a voice, helping to fill in the gaps of the narrative, and readers will find their stories compelling in themselves as well as adding to that of Creola’s and her family’s. Maurice is the school janitor at the elementary school where Creola taught, and he had been joining her and the boys in the movie theater to watch the films for which they all had a passion. He’s also a gay man living in a small Texas town in the 1960s, which expands the scope of the story and the meaning of family. Rita is L.E.’s mistress, who isn’t someone you’d expect to be a mistress, which in turn broadens the reader’s view of what kind of woman would be involved in an extra-marital affair and why. Both Maurice and Rita are sources for important information and insight.

Kim Powers is a master at character creation and development. While showing the strengths and the flaws of all the characters, he is encouraging readers to take a deeper look at not only the characters, but at the people around them and themselves. What is forgivable in a person? What motivates them, scares them, and gives them hope? Rules for Being Dead is that dark sort of comedy and mystery that while making fun of one of our darkest fears, the afterlife, gives us the incentive to look at the life lived now.

Rules for Being Dead is easily going to be a favorite book this year for many readers. It's certainly earned a place on my Favorites List and a book I will heartily recommend. Kim Powers brings his diverse writing skills to a story that has a voice like few others. In fact, I'm going to recommend something I don't think I ever have before for a book, and something I intend to follow through on myself. I think readers would thoroughly enjoy reading Rules for Being Dead first and then, when it comes out in audio, listening to it. Again, there is such amazing voice in the story that it should be lingered over thusly.

For full disclosure purposes, I received an advanced reader's copy of Rules for Being Dead, and my review reflects my honest reaction and opinion.
Kim Powers can be found at:
Website     https://kimpowersbooks.com/
Twitter       https://twitter.com/KimPowersABC
Instagram   https://www.instagram.com/kimpowersabc/
FaceBook   https://www.facebook.com/kimpowers
Posted by Kathy Reel at 10:37 PM