Scot on the Rocks by Catriona McPherson: Reading Room Review 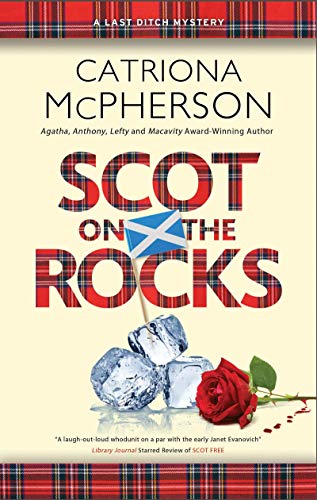 Catriona McPherson is wily, as well as witty. You may think that the Last Ditch series is funny and a hoot to read, and you would be right. But, it has a depth that exceeds its humor. By this third book in the series, Scot on the Rocks, readers are hooked on the extended family of the Last Ditch Motel, a group of what may at first appear to be misfits, but who are joined at the heart and compliment one another’s quirkiness. Lexy Campbell, the Scottish transplant who lives on a boat in the slough beside the motel is the focus of the action, but her cohorts in chaos are never far behind. Family redefined for the residents of this less than stellar motel is family redefined by all who read the series’ books. See how wily Catriona makes that happen. Impressive.

In Scot on the Rocks, Lexy and her crew/family become entangled in her ex-husband's case of his missing wife, Brandee, who was the #1 wife and now the #3 wife. Lexy only held the wife #2 position for 7 months. Since Todd, the insectophobiac anesthetist who lives at the motel with his pediatrician husband Roger, and germophobic Kathi, who is married to the motel’s live-in manager Noleen, have inserted themselves into Lexy’s counseling business, they are involved in any business that comes Lexy’s way. So, when Lexy’s ex-husband Bran shows up begging Lexy to help find his missing wife, the three of them start investigating to see if Brandee was kidnapped, or if she took off on her own. Did I mention that Lexy’s counseling business also does investigations, which usually end up putting her at odds with the police, especially a female cop named Mike?

In concurrence with Brandee’s disappearance is the baffling abduction of one of the town’s beloved statues, Mama Cuento. In an even more wacky turn of events, one of Mama Cuento‘s bronze toes has been broken off and left behind with a sinister note. When Bran shows Lexy and crew a similar kidnapping note he receives with an acrylic nail enclosed, it’s anybody’s guess as to what is going on, what’s connected and what’s not. Of course, as fans of this series know, the entire motel family will become participants in this wild and wooly chase for answers, although being the standing members of Trinity services, it will be Lexy and Todd and Kathi who take the most dangerous risks and find themselves on a road trip to Patriarchyville. There are lots of surprises in this tale of who or what went where and why. Readers will be entertained without pause.

There is no doubt in any reader’s mind that Catriona McPherson knows how to tell a tale, and in this series, readers also can depend on McPherson to make them laugh. But who says you can’t broaden your horizons while you’re laughing? Scot on the Rocks and the previous two books in this series are invitations to explore, to color outside the lines and think outside the box. The Last Ditch Motel is a living, breathing example of diversity and how much better it makes one’s life. Catriona McPherson has created a magnificent cast of characters to lead us all into a better place.

A note here that Scot on the Rocks is only available on e-book presently. It will be out in print in February or 2021.
Posted by Kathy Reel at 5:11 PM