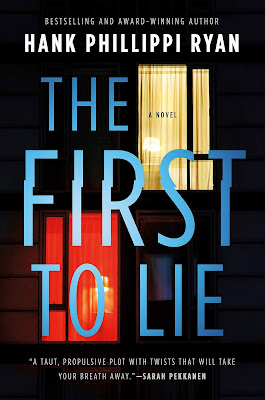 Whenever I review a book by Hank Phillippi Ryan, I know I will be dipping deep into the well of superlative language to describe it. It is always a challenge to find words that fully express just how great a read it is. Ryan’s newest standalone book, The First to Lie, may be the one that exceeds my abilities to adequately praise. This book is so well written and tightly plotted, you must wonder what the author can ever do to top it. Of course, those of us who have read Hank Phillippi Ryan for years know that she is well known for setting the bar high and achieving it every time. The many awards that set on her shelf reflect the consistency of her excellence, awards that include five Agatha Awards, three Anthony Awards, the Daphne Award, and the Mary Higgins Clark Award. Then, there are the 37 EMMYs for her television investigative reporting. With this remarkable talent in writing and investigative reporting, Hank Phillippi Ryan was born to write The First to Lie.

There are certain favorite elements I love about my crime/mystery novel reading: a compelling story, a layered storyline, intriguing characters (with secrets), suspense that keeps me squirming in my seat, and twists I don’t see coming. The First to Lie is, as they say, all that. In addition, something that greatly appeals to me in all of Ryan’s books, and certainly in this one, is her clever weaving of the title into the story on more than one level. Who is the first to lie? What constitutes a lie? What are the unforeseen consequences of a lie? And, who is lying and who is telling the truth. You won’t know until the very end who are the liars and, indeed, if anyone is telling the whole truth. The truth is a slippery commodity in this story, but then the reader might have to decide if lies are acceptable to achieve a greater good. Ryan always gives us food for thought in her spellbinding stories, reaching beyond the pages of the book into our real lives.

With some of her best characters to date, Hank Phillippi Ryan unfolds the contemporary version of the epic tale David and Goliath. The giant in The First to Lie takes the form of the Pharminex Company, a major player in the pill pushing industry. The characters created by Ryan to combat the evils of this company’s use of a specific drug are exquisitely complex and often duplicitous. But, then you go back to that question that the author sows throughout, using somewhat devious means to achieve a good end. I’m only going to discuss the three main characters, as I don’t want to give too much away, but readers already know that it takes a village to make a great story work, and this author is a master at minor characters as well as major ones.

Ellie Berensen is an investigative reporter who has just signed on with a new Boston news television station. She has three weeks before they hit the air, and Ellie is working on a story that will create shockwaves in the pharmaceutical world. She intends to bring down Pharminex, a company who claims it has the health and care of women at its heart. Ellie knows that one of the drugs being pushed hard by the company for infertility can have irreversible ill effects for women, and that Pharminex is hiding that knowledge from patients until it's too late. Meg Weest comes on board as just an assistant for Ellie, but Meg quickly inserts herself directly into the investigative research and Ellie’s personal life. While Ellie is trying to adhere to an ethical investigation, Meg seems willing to resort to subterfuge without any qualms. Nora Quinn is a new pharmaceutical sales representative for Pharminex and has her own agenda for working at the company. She suspects that the drug being pushed off-label as a miracle to treat infertility can leave some women barren without their knowledge of the danger. In her visits to doctors’ offices as a sales rep, Nora feels like she’s in the perfect position to find women who have suffered the devastating result from Monifan and who are willing to talk to her. But, Nora finds out that big pharma has long reaching arms to prevent security breeches, and Ellie discovers that even the women harmed are reluctant to speak out. When a patient dies, the stakes rise alarmingly.

The story is told mainly from the perspectives of Ellie and Nora, but in typical broad, inclusive strokes for Ryan, readers also gain insight into the family behind Pharminex through the “Before” chapters. These “Before” chapters from the past feature Brooke, the Vanderwald daughter, and Lacy, the Vanderwald daughter-in-law. Running through all the chapters are deceit, betrayal, and hidden agendas. The characters are seeking justice, but at least one is seeking revenge, too. Whose lies will take them to the finish line first. The chapter structure enhances the suspense, moving from character to character, creating a pace that suggests urgency. The absolutely brilliant aspect to the chapters for me is the many cliffhangers that left me breathless when the next chapter switched to another character and sometimes another time setting. If I didn’t know what a genuinely lovely person Hank Ryan is, I would call these chapter cliff hangers a sadistic author style, but while you're waiting for the cliff hanger to be resolved, you're reading more riveting story.

The First to Lie is a dream come true for crime/mystery fans.  It's a page turner that keeps the reader guessing until the end, with all the suspense of an Alfred Hitchcock movie.  Don't plan anything else once you start reading this book because this story is the very definition of riveting.  Hank Phillippi Ryan should make some room on her shelf for the awards that are sure to be bestowed on her for this thrilling new book.

I received an advance copy of this book from the author/publisher, and I will verify that the opinions expressed in my review are all my own.
Posted by Kathy Reel at 12:27 AM