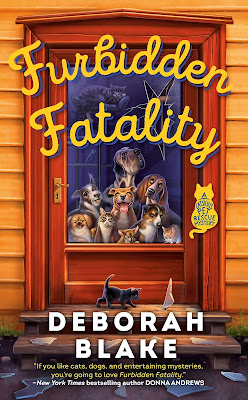 When I was asked to read and review Furbidden Fatality, I looked up its description and knew I would be happy to read it. It’s about someone reopening an animal sanctuary, and I am currently looking for a rescue dog, after our sweet rescue Brittany Spaniel Coco died a year ago. And, Furbidden Fatality is a murder mystery amid all the wonderful dogs and cats, so you get cute and cuddly and escalating suspense all in one package. It’s heartwarming while full of dangerous sleuthing. The author Deborah Blake has written books in other genres before, but Furbidden Fatality is her first mystery novel. Her writing chops show in the creation of this entertaining story.

Kari Stuart already loves cats and dogs when she finds a stray black kitten around her apartment building. But, as she has two cats and a dog in her small apartment, keeping the kitten is just not possible. So, she does the responsible thing and takes the kitten to a shelter, but the shelter is full. Although the name of another shelter, a rescue sanctuary, is mentioned, it’s also a shelter that is in the process of closing down due to lack of funds, so its also is taking no animals.

What to do? Well, if you’re a twenty-nine-year-old woman, recently divorced, animal lover who has recently won five million dollars in the lottery, and you’re looking for a purpose in life, you buy the run-down animal sanctuary to fix up. So, that’s what Kari does, and, of course, she keeps the kitten, whom she names “Queenie.” How could she not keep her destiny director? This story is on track to its happy ending, right? Well, not so fast. While Kari has bought a new beginning in life, even with a house on site in which she can live with her pets, she has also bought into some complicated problems, including a staff of volunteers with one distrustful member, a sanctuary building that needs lots of repairs and upgrades, a dog named Buster that has his head on the chopping block, and a dog warden who doesn’t seem to like dogs much.

Bill Myers, the aforementioned dog warden, does indeed prove to be a dedicated enemy of Serenity Sanctuary. Kari has her first real taste of just how nasty he can be at the hearing for Buster, the sweet pit bull, Meyers has ticketed and accused of biting a man. As the new owner of the sanctuary, Kari must help plead the case for Buster’s exoneration, as no one at the sanctuary or who has met Buster believes he bit someone. Myers is determined to send Buster off to be euthanized, like he’s done to too many other dogs in the area, but the case is continued and not decided the night of the court date. Myers is livid, and he and Kari have words outside of the court. Kari knows she has a formidable enemy, but then she finds that enemy, Bill Myers, dead by her animal sanctuary building in the wee hours following the court appearance. Now, the problems really begin. While Kari was seen having an argument with Myers, there are plenty of people in small-town Lakeview who had grudges against the ruthless dog warden. However, being at the top of the list of suspects is a big incentive for Kari and her friends to start investigating on their own. What they uncover will shock everyone, including law enforcement.

I thoroughly enjoyed Furbidden Fatality. It is solidly written, with a well-paced ascension to the murder resolution, characters who evoke an immediate attachment and investment, a story-line that tugs at the heart and screams for justice, and the personification of the animals, especially “Queenie” into personalities we adore. The setting of a small town in the upper New York state Catskills is a lovely place for readers to land. And, there is the humor the author deftly interjects. It’s one of the elements that endears the characters and animals to us so much. An early indication of this humor occurs in a conversation between Kari and her best friend and local dog groomer Suz.

Kari: I might be crazy—the jury is still out on that.

Suz: You bought an animal sanctuary so you wouldn’t have to keep this kitten? I think the jury can  come back in.

Add to all the other reasons to read this book a gorgeous cover and a catchy alliterative title, and I am certain that Deborah Blake’s first mystery and first in the Catskills Pet Rescue mysteries is going to be “fur”vently received by mystery readers. I can’t wait until the next addition to this series.