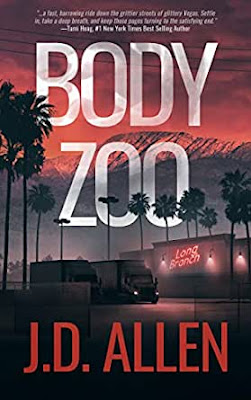 “Don’t grow roots, girl. Roots get you stuck. And stuck gets you dead.”

I do so love being gobsmacked by a book. Body Zoo by J.D. Allen obligingly did just that. I went into this third Jim Bean book without having read the first two, so I was clueless as to what to expect. What I got was a gripping story that kept its pedal to the metal and gave me one hell of a ride. The pacing was right on the mark, no dragging or flying too fast. Add to an exquisitely twisty storyline the cast of dynamic characters who leap into your mind page by fascinating page, and the reader is solidly hooked. The main character of Jim Bean and his support crew are unerringly a work of perfection, but the author doesn’t stop there with her ability to character dazzle you. The bad guys, oh those bad guys, are a work of art, too.

Now, here is the outstanding bonus to reading Body Zoo. I mentioned that I hadn’t read the previous two Jim Bean books, 19 Souls and Skin Game (officially called the Sin City Investigations series). The bonus is that readers can read Body Zoo like a stand-alone and be completely in the loop of Jim Bean’s world. However, I should warn you, a good kind of warning, that reading Body Zoo is going to have you scrambling to buy from your favorite bookstore or borrow from your library the first two books. Although I want to kick myself for not having started reading the series when it started, it’s a great feeling to know there’s more before (and a new one later this year).

Jim Bean is a private investigator who prefers to keep his life simple. He does not achieve this goal, except financially. His friends and cohorts in investigations include his old friend, and by old I mean 70 years old, Ely, who likes his weed and knows his technology. His other male friend is Oscar, who is a bounty hunter and always a good person to have on your side. The third all-star player is Sandy, a college student who has pretty much whipped all three men into submission. Her intuitive skills are as sharp as her research skills, making her an invaluable asset to Jim. And, an outsider part of the gang is LVPD Detective Noah Miller, a reluctant resource for official information. This whole ensemble cast works like a well-oiled machine in helping to make Las Vegas a little less mired in its reputation for danger. Of course, anything can happen in Vegas, and the bizarre is natural to its habitat, so Jim Bean and his posse and readers can always expect the unexpected.

As I said, Jim thinks he wants to keep things simple, but his investigation for an insurance company concerning a burnt mobile home gets him sniffing out secrets on his first walk-through of the burned-out unit. A dead cat that had obviously been hiding in the bathroom, the lack of a personal touch in the trailer, and sparseness of wardrobe all set off an alarm in Jim’s mind about the young woman who lived in the trailer and now can’t be found. Emilee Beck has vanished, and Jim wants to know why and to where. The fire was no doubt started by someone, but Emilee Beck was not that someone. Jim’s work for the insurance company is straight forward, but he can’t let go of the ghostly disappearance.

Luckily, there is a connection of some importance to a local big business venture in the Las Vegas area, Ward’s Outdoor Adventures, an outdoor adventure empire on the road to Lake Mead. The young heir to this empire, A.J. Ward, is discovered by Jim’s detective friend Miller to be the boyfriend of Emilee. Acting on his curiosity and loosely tying it to the matter of the fire at Emilee’s trailer, Jim goes to Ward’s Outdoor Adventures compound to question A.J about Emilee’s whereabouts. Jim finds A.J. working in the taxidermy shop in the business compound, and while at the taxidermy shop, Jim observes and helps out a bit with a taxidermy project A.J. and the main taxidermy artist Travis are working on. Jim learns of Calvin Ward, who runs the whole show and who is in the medical supply business as well. Calvin’s involvement with that business includes supplying medical teaching facilities with human parts and torsos, a perfectly legal business, with the dead bodies coming from those unclaimed from funeral homes and other places where the dead have donated their bodies to science. It’s a creepy business, and Jim soon learns that Calvin is one creepy man.

Soon after Jim’s interview with A.J., the young man also goes missing, and Jim is called on by A.J.’s father Richard to find his wayward son. It is apparent, when Jim meets with the Ward brothers, that Calvin is clearly in charge, and Richard is the silent partner due to early dementia and physical limitations. The Ward family outdoor business owns a large amount of land in Utah that is used for guided hunting excursions as part of their business. The thinking is that A.J. might be hiding out there and the brothers are concerned it involves Emilee. So, Jim gets to indulge his search for the missing young woman in his pursuit of the young man.

Emilee has, with some unfriendly urging from others, left Las Vegas and the small community of Henderson and has temporarily landed in the small town of Sparks to make some quick cash and come up with a plan for moving on. She isn’t worried about the fire or being blamed for it. Emilee has much darker worries that compel her to keep looking over her shoulder. She trusts no one, but she has let her guard down by staying too long in Henderson and getting to know a few people, like A.J. He keeps texting her, telling her he can help her, but she’s only completely trusted one other person in her life, and that person is long dead. With Emilee’s past closing in on her, options are quickly disappearing. The story explodes into a cat and mouse game with more than one cat and mouse. There are deep, dark secrets that will drop like a ton of bricks into Jim Bean's search. The danger for all is at a fever pitch, and there is no turning back from a collision of wits, power, and depravity. You might think it’s over before it is. The intensity of the chase will keep readers on the edge of their seats, and there is no escaping the full-fledged impact of brutality.

I should note that when I started reading Body Zoo, I was only going to take a peek, as I had a reading schedule for reviews I was already trying to keep under control. Well, there is no peeking at this book. Once the reader starts it, the reader must follow it to the end. J.D. Allen is a master crafts-person of the art of writing, and thankfully she shares her knowledge by teaching classes about some of its most crucial elements. From suspenseful, perfectly paced plot to great characters to dialogue that is always on point and contains great wit, this author shines in every aspect of what makes a story unforgettable. Reading this book was an opportunity to see how an artist deftly combines elements to create a successful work and how there’s nothing better than a story well told.