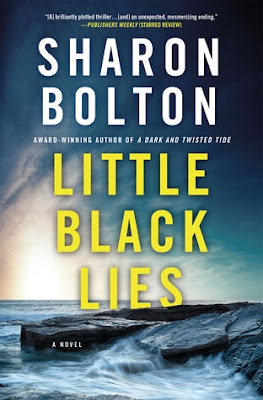 "We were inseparable until the day she killed my sons."

Little Black Lies is one of Sharon Bolton's best books throughout all but the last twist. I hesitate to say that, because first, I don't want to spoil it, and second, because the story is so worth reading. This is not a negative review. I just can't honestly ignore the one aspect of it that made it less than flawless for me.

Divided into three parts for each of the main characters, it's an emotional, suspenseful tale that completely captivated me. The isolation of the Falkland Islands setting brilliantly coincides with the mental isolations of Catrin, Rachel, and Callum. The few days leading up to the third anniversary date of the tragedy that will always connect them and the few days after that date is the focus of the action, with flashes back to what brought them together and the after-effects of the day when Catrin's two children died as a result of her best friend Rachel's neglect.

With a young boy from a visiting cruise boat gone missing on the island, there is a frantic search in which all three characters are involved. That there have been two other boys, local boys, missing in the past three years is a fact never far from the islanders' minds. But, it's the next child's disappearance that brings the past tragedy colliding with the present. Betrayal, heartbreak, guilt, regret, and revenge fill the hearts and minds of the three people whose lives have been shattered. What one character hoped would be the anniversary year to end the pain becomes a search for the lost and a desperate grasp for redemption.

This review is a bit different than what I usually do. I've given more of an essence of the book instead of an outlay of the action and opening and closing remarks. I think readers will appreciate discovering for themselves the steps leading to the unexpected ending, an ending with which I'm still grappling, but I'm hopeful I will come to terms with it in view of the amazing book preceding it.

Well worth a mention, in addition to the crux of the novel, is the setting of the Falkland Islands as a perfect setting for the story. Bolton's curtailed descriptions of the Falklands' cultural, physical, and historical attributes play beautifully into the telling of a tragedy, and the flashbacks from Callum of the British and Argentinian war over the islands twelve years prior give that bloody conflict its due.  Also, Catrin's work in conservation after her grandfather's involvement in whaling in a bloody conflict of another type reveals much about the island's survival and its inhabitants.

I highly recommend this read with only the caveat of my personal distaste for an ending that seemed abruptly tacked on, an unsubstantiated resolution .