The Ghost in the Garden (Justice Jones #3) by Elly Griffiths: Reading Room Review 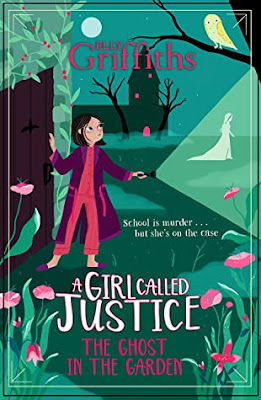 It’s book number three in the Justice Jones Mysteries series by Elly Griffiths, and I couldn’t be more pleased with this continuing collection of clever mysteries. When I describe the series to others, I include the effect each book has had on me, that of returning to my youthful delight of first falling in love with mysteries. The elements of true detection and perseverance takes the reader on an adventure where the suspense never loses its edge. These are stories that may be categorized as children’s mysteries, but they are far too good to give over completely to the young sleuth fans. I buy two copies of each book, one for my granddaughter and one for me.

In The Ghost in the Garden, Justice is thirteen and returning for her third term at Highbury Academy for Girls, and this time she’s actually looking forward to it. Seeing her best friends Stella and Dorothy has her excited, but it won’t be smooth sailing with her besties, as a new girl has joined the Barnowls dormy. Letitia Blackstock is truly one of the daughters of gentlefolk the school caters to, as her parents are extremely wealthy. Letitia takes full advantage of her treasured position at the school, not caring much for rules and seemingly getting away with it by the staff. Letitia has latched onto Justice as a friend, and both Stella, a fellow Barnowl, and Dorothy, a maid, aren’t too happy about Letitia butting into their close trio. Justice herself is unsure how to handle Letitia, and she doesn’t want to lose her closeness with Stella and Dorothy, but the Headmistress Miss de Vere asks Justice to help Letitia acclimate to the school. Dorothy is Justice’s enthusiastic partner in solving mysteries at Highbury, and Stella is her less enthusiastic but still willing other partner in following the trail of evidence. They really don’t need someone meddling in their business.

The one broken rule you can depend on in Justice’s time at Highbury is not leaving your dormy after lights out. Justice does her best clue searching at night, slinking around the large old house, sometimes with Dorothy, sometimes with Stella, and often by herself. She has discovered a couple of ways to go outside to the grounds of the house at night, and it’s just as atmospheric as you think it might be, reading about Justice’s visits to the old tower or the empty disused swimming pool. Justice has nerves of steel and a confidence gained from reading her late mother’s detective books. The head mistress, Miss Delores de Vere, despairs of Justice’s boldness in pursuing the mysteries that seem so at home at Highbury. With Justice’s father Herbert, who is a busy London Barrister, having an apparently long standing friendship (something Justice still doesn’t understand) with Miss de Vere, Justice always manages to avoid being expelled.

After spending the Half Holiday with Letitia at her family’s nearby estate, Letitia’s mother has sent the two girls back to school with an enormous amount of food treats. As is the tradition goody baskets from home are shared with the whole dormy, so the Barnowls plan their feast. Letitia, who seems to like breaking rules as much as Justice, suggests they take their bounty to the Haunted Tower on the grounds at midnight, but practical Stella reminds them it will be locked. Justice comes up with the barn next to the ice house as an acceptable location, acceptable only because the ghost of Grace Highbury is said to walk in the gardens there. So, they sneak out to the barn that night and after gorging themselves on cakes and sandwiches, they hear a scream and see a ghostly figure who looks like a young girl. Their response is to run for the house and get back to their room. But, as they recover from the excitement, they notice Letitia is missing. Thus begins Justice’s new mystery challenge to solve. As usual, it has some thrilling twists and a surprising resolution.

This series has a trifecta of perfect elements coming together. The time setting for mystery/crime couldn’t be more perfect for highlighting pure detecting, without use of fancy or electronic devices. The time period is 1937, so Justice and her sleuthing team must depend on the little grey cells that Hercule Poirot so often refers to in his work. There are no cell phone distractions or Google or 911 (999 in the UK). The geographic setting is perfect for mystery, too, as Highbury House, School for the Daughters of Gentlefolk, is located on the edges of the Romney Marsh area of southeast England, a remote, isolated setting. A bad storm, rain or snow, can completely cut the school off from the rest of the world. And, Highbury House itself seems made for mystery, with its turrets and tunnels and cellars and a new hidden feature in this book, a priest hole. The character of Justice is yet another brilliant stroke of genius on the author’s part. Justice, having grown up until age eleven with a mother who wrote mystery novels and a father who is involved in murder trials, has an advantage in gearing her thinking toward clues and evidence. But, she also seems just naturally inclined in working out puzzling situations. She keeps a journal of clues and evidence and suspects and observations. I like that the time period requires her to rely on herself as the resource, to dig for clues and do research from scratch, so to speak. So, time setting, physical setting, and character form an impressive trio of elements collaborating to support an always exceptional story. And, I must give kudos to the covers for this series for disproving the old adage you can’t tell a book by its cover. Well, in this series, yes, you can. They are truly works of art that are matched inside by a work-of-art story.

It seems I can’t close a review of anything written by Elly Griffiths without a mention of how masterful she is in creating characters, both main and supporting. Besides the main character and regular amazing cast, the author always includes new characters who are fascinating and integral to the plot. I have long ago pronounced Elly Griffiths as Queen of Character Creation. Of course, these clever characters are lucky to be woven into a story worthy of them, plotted by a person born to tell stories. And, don’t forget the Ruth Galloway series, the Brighton (Stephens and Mephisto) series, and the stand-alones by Elly Griffiths. To find an author who is so talented and so versatile is truly one of my most treasured reading discoveries. Enjoy them all.