The Last Thing to Burn by Will Dean: Reading Room Review 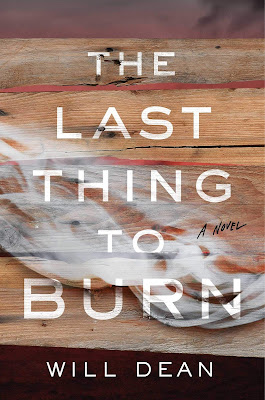 As a long-time reader and reviewer, I’ve encountered lots of books receiving buzz and declarations that this book must be read. Well, The Last Thing to Burn lives up to all the hype, and it really must be read. I have a shelf where I put stand-alone books that have impacted my soul, and Will Dean’s The Last Thing to Burn will be going on that shelf, joining the likes of Sena Jeter Naslund’s The Four Spirits, Harper Lee’s To Kill a Mockingbird, Ralph Ellison’s Invisible Man, Lori Lansen’s The Girls, Allen Eskens’ Nothing More Dangerous, Gabriel Zevin’s Elsewhere, Paul Fleischman’s Whirligig, and Alan Brennert’s Molokai. There are more, but what all these books have in common with The Last Thing to Burn is that I saw a truth more clearly than I had before reading them. Some might call them teachable books, but there is nothing didactic about them or about Will Dean’s book. Books like these become a part of who you are from that moment you read them and on. So, I owe Will Dean a debt of gratitude for his story that makes me a more enlightened person, a better person.

Thanh Dao and her sister leave their parents’ home in Viet Nam for better opportunities in the UK, but the men who had promised a bright new future there lied and stole their lives instead. Thanh has been in her new country for nine years, the last seven married to a man named Lenn and living on an isolated farm in the Fens. Lenn calls his wife Jane and requires she adapt to her new country’s way of life, down to the very food she eats. Jane has no freedom and cannot leave the isolated farm in the English Fenlands that she shares with Lenn. There are cameras everywhere watching her every move, and her captor husband reviews them every night so he can see what she has done while he’s been tending to the farm work. She has the prescribed daily tasks of scrubbing the house clean, cooking the meals, and doing the laundry. There are other demands which are worse than the daily drudgery though.

The story opens with Jane trying to escape while Lenn is off to town, but with her physical impairments, which Lenn has inflicted, it’s excruciatingly slow and laborious. Lenn returns before she can even clear his property. Lenn’s punishment for Jane is not physical but emotional. Each time she disobeys or rebels, she is required to pick one item from the seventeen personal items she brought with her to the farm. Jane is now down to four items, and this escape attempt costs her the precious possession of her parents’ photograph. She is completely disheartened until a woman named Cynth stops by while Lenn is gone. Cynth is looking to rent a pasture for her horse. While Jane must be careful with the cameras ever recording, she does manage to tell the stranger to come back and talk to her husband about it. Jane holds some hope in the possibility of another meeting, as does the reader.

However, before Jane can plan any more escape attempts, which are physically almost impossible for her, a miracle happens, something she never expected. She becomes pregnant with Lenn’s child, which ties her to the hated cottage for at least a while longer but gives her a new lease on her determination to have a life outside of her prison. Her baby deserves better. So, Jane endures being called her husband’s dead mother’s name, cooking his eggs just the way his mother did, never shutting a door for privacy, taking the horse pills Lenn doles out to her for her physical pain and keeping her doped, and daily scrubbing the cottage clean. She must survive for her baby.

When the baby does arrive, it’s a girl whom Lenn calls Mary, but Jane/Thanh calls Huong when she whispers in her child’s ear. There’s nothing easy about taking care of a baby in primitive conditions, and yet, Jane perseveres, as she works toward building up both their strengths to fight for their freedom. Then, a major complication arrives. Another woman is abducted by Lenn and kept in the cellar, and it’s someone Jane knows. Listening to the suffering from this woman come up through the floorboards will just about undo Jane, and the silences are even worse. Can Jane ignore the needs of another human being to save her baby? There are hard choices ahead and no easy answers. If escape is the goal, what kind of escape can that be?

The Last Thing to Burn is a dark read, no doubt about that, but it is also a story that keeps the protagonist and the reader looking for an end to that darkness, believing that its end is possible. Whether it is possible or not, the book shakes the reader’s core. Will Dean takes readers through the terror of being a captive, both physical and mental, by using Thanh Dao/Jane as narrator of her pain and dehumanization. The Last Thing to Burn is billed as a thriller, and that, too, is certainly an accurate description. I was on the proverbial edge of my seat throughout the book, waiting for Lenn’s control to turn deadly. The suspense level never lets up, always the fear by Jane, and by the reader for Jane, that she will make a misstep leading to her end and/or the end of little Huong, whom Lenn has vowed to kill if Jane tries to escape again.

The book at just 238 pages makes every one of those pages count. Every scene moves the story forward in a well-paced swell to the climax, and the twists will cause readers to gasp. The characters are superbly honed for their parts in this human tragedy of a tale. The devastation of human trafficking is front and center but is the personal story of Thanh Dao through which that issue unfolds and from which the reader discovers the horrors of it. The Last Thing to Burn is a tribute to those who live nightmares and yet strive to survive for a better life, a life with dignity, away from cruelty and abuse. Monsters exist, but so does endurance in the face of evil, and sometimes you have to be your own hero. Well done, Will Dean.