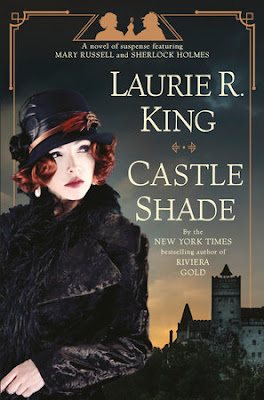 “Shadowy figures, vague whispers, the fears of girls, dangers that may be only accidents. But this is a land of long memory and hidden corners, a land that had known Vlad the Impaler, a land from whose churchyards the shades creep.”

Unless it’s that certain time of year, where the ghouls and ghosts are celebrated, you probably won’t find fiction books thematically linked to the Dracula tale grouped together in a library or bookstore. Being a reader who loves a good theme and enjoys a well-written Dracula connected book, I would like to see such a grouping on a permanent basis. I adore different takes on the Dracula theme, but I am especially fascinated by those that are uniquely clever. Castle Shade by Laurie R. King is that. Mixing history, Queen Marie of Romania, with the atmosphere of Transylvania appeals to my love of history and legend combined, and the sleuthing of Mary Russell and Sherlock Holmes is a thrilling treat.

But, don’t imagine that Castle Shade is a vampire story; it’s not. However, it is very much about the folklore and myths surrounding that tale, how the local people are rather easily swayed to believe in the possibility of a darkness that seeks out the blood of young women. And, this story is set in Romania, with Castle Bran being the summer residence of Queen Marie and where Russell and Holmes are visiting. Readers of this series will remember that Holmes had traveled to Romania by himself when Russell was in Monte Carlo pursuing Mrs. Hudson. Now, Russell is accompanying Holmes back to the area of Romania known as Transylvania (I wonder how many people can read that name and not say it in their heads as Dracula pronounces it). They are there at the request of Queen Marie, beloved Queen of Romania and granddaughter to the iconic Queen Victoria of England. Queen Marie has received a threat that involves possible harm to her youngest daughter Ileana, a girl still in her teens. It is this, the danger to a young girl, that has Russell and Holmes eager to help find answers quickly. But, they must also be surreptitious in their mission, as the Queen wants to keep it quiet, so they are presented as architectural consultants in the ongoing work being done to Castle Bran.

The threatening letter is one mysterious occurrence, but there are others, including rumors of witches and ghosts and lurking shadows. Something or someone is stirring the pot, so to speak, and they are doing so only when Queen Marie is in residence at the castle, thus hoping villagers will connect the dots to Her Highness. A quick solution is needed before the tide turns against Marie. Villagers in Brasov are already hanging garlic in their doorways.

Russell and Holmes are at first leaning toward a political explanation to the troubling events, as Queen Marie has been an amazingly effective leader while her husband is in failing health. They think that there might be those wishing her to be a less popular and distracted Queen to push agendas of their own. The political angle also has Russell suspecting that Mycroft, Sherlock’s brother, is responsible for their involvement, something that does not sit well with Mary Russell. But, the welfare of the young princess is more important than Russells' grievances, and, as they investigate and uncover clues, the political culprit seems less likely and personal revenge more likely.

As per usual, Russell and Holmes don’t waste any time getting right on the case. The two outfit themselves for stealth in their black clothing on the very night they arrive and go cautiously about the village, looking for the unusual to happen. And, happen it does, as the sharp eyes of the pair discover an attempt to poison someone’s chickens and the deliberate placement of a witch’s hex bag on a local's front doorway path. Undoing these attempts to stir up the locals puts Holmes and Russell in control of the narrative, but it will require constant vigilance to maintain that control. When the misdeeds take a new direction of harm to a person, the urgency increases to find the way through the darkness and save lives. Hold on to your hats because the chase gets wild and woolly, including a premature burial experience.

There are several suspects considered by Russell and Holmes, and I was able to see a case for each of their guilt. But, I was surprised by the actual villain and the reason for wanting to drive Queen Marie away from Castle Bran. Laurie King does a good job of presenting red herrings while leading readers to the miscreant. I’m rather torn between thinking Russell showed great bravery and thinking she took some questionable risks. However, I am more convinced than ever that Mary Russell is a match indeed for the wily Sherlock Holmes. She is continuing to grow in her confidence, and Holmes is realizing that she is growing and their partnership and marriage is shifting. There will be issues to address in the near future.

Atmospheric is a word that often gets thrown around in describing books set in the countryside of Transylvania, but it is so brilliantly accomplished by King in Castle Shade that it must be noted in my review. The author has such a beautiful command of words in her description of the area and its inhabitants in achieving the spectra of darkness looming over the luscious gardens of the Queen. It’s the atmosphere created that keeps readers on the edge of their seats and believing that anything is possible.

I was delighted with the seventeenth book in the Russell and Holmes series. Castle Shade satisfied my love of historical connections in my fiction reading with the interspersing of Romanian history after WWI ended and the tale of how Queen Marie came to be Queen of Romania and an enormous asset to her adopted land. I’m always pleased when my fictional reading takes me to seek out more information about the real people and places in the story. And, as crime/mystery is my favorite genre of fiction, the cases that Russell and Holmes pursue continue to thrill me. I highly recommend Castle Shade, and I believe it can be read as a stand-alone, which is a great bonus. Laurie King is a true weaver of tales, who never lets a thread slip, and oh what fascinating threads they are.