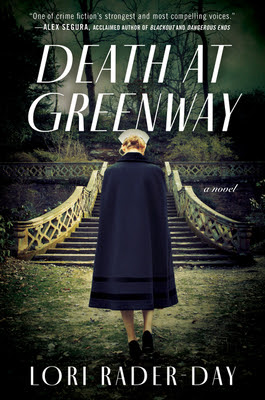 Lori Rader-Day always gives readers a unique story, something different from anything else they’ve read. I love that freshness, and the characters that help create that uniqueness. I’ve been introduced to dark sky parks, handwriting expertise, and a character who beat the odds of being kidnapped as a baby. And, in Death at Greenway, Lori Rader-Day takes a leap into another whole pond. Well, she actually leaps across the pond to merry old England when it wasn’t so merry during WWII. Historical mystery fiction! Oh, but she doesn’t stop there with delighting me. The setting is Agatha Christies’ Greenway home and South Devon, with London as the starting and ending points. As part of her research, Rader-Day visited Greenway and stayed there. She brings the authenticity of having walked the house and grounds to this story. Is it little wonder I’ve been looking forward to reading Death at Greenway.

After a beginning chapter in which Agatha Christie is at Greenway with her husband and house staff listening to the radio announcement from Prime Minister Chamberlin that England was officially at war with Germany (the listening world encapsulated in that kitchen scene), focus is changed to London, April 1941. London and its inhabitants are suffering greatly from the daily bombings of the German planes, with whole families dying in their homes, despite the air raids and shelters. There is a general consensus that the children of London must be saved, taken away from the city to the country, where they will be safe. Parents are handing over their children to organized evacuation operations, while the parents stay and work in London. Bridget Kelly, who is training to be a nurse, finds herself part of such an operation due to an egregious error she has made in treating a patient. Bridget is given the choice to give up her nurse’s training completely or be a part of an evacuation of ten children to an undisclosed country location. Bridget chooses to lend her services to the evacuation movement.

War is hell and chaotic, and Bridget starts her journey with the evacuated children, their sponsors, and another nurse in a crowded train station, with much shouting and hurrying and immediate caring for the children. As if the chaos of soldiers and children and parents saying goodbye to their children weren’t enough, the second nurse in the party introduces herself as Bridget Kelly, too. It seems everything in our protagonist Bridget’s life is surreal at this point. Mrs. Arbuthnot, who is in charge of the group, insists that they choose two dissimilar names, so protagonist Bridget becomes Bridey, and the new Bridget becomes Gigi. Bridey finds out quickly that Gigi is happy to let Bridey handle the children by herself for long periods of time while Gigi socializes with a group of other young people on the train. With two babies in the mix to care for, it’s quite the challenge. It’s a long train ride to their destination, which they finally learn is Greenway, home of the famous author Agatha Christie, in South Devon.

Greenway is beautiful, but the evacuation team and their wards are restricted to several rooms and told not to enter others. However, they have lots of space outdoors to walk and explore. Agatha Christie is in residence at Greenway when the group arrives, but she doesn’t interact with the evacuee group. She leaves for London not long after. This story does not include or involve the Grand Dame of Mystery, but we do get some peeks at a habit or two of hers. I enjoyed learning more about the evacuation of children from London and the ten children or vacs, as they were called, at Greenway. Rader-Day weaves a fascinating story into the historical facts of this evacuation, and she even talked to one of the vacs still alive, little Doreen. The two nurses, Bridey and Gigi, carry a heavy responsibility, to keep these children healthy and safe, which is more of a challenge than Bridey thought it would be. Although Greenway is far from London, the German planes are still a danger, as they bomb nearby locations, causing the house and earth around the group to tremble in response. Bridey wonders why they were evacuated to somewhere on the coast and to a large white house on a hill.

So, what is this story? An historical fiction book or a mystery? For me, it was historical fiction with lots of mysteries running through it. There is murder, but everyone is so busy with the war that a full investigation is not forthcoming. But, still the murder adds to the mystery of what is happening in the small village of Galmpton, where healthy men are dying disproportionate to statistics. What is important in the story? What direction should the reader be focusing on? Oh, Rader-Day requires our undivided attention, so readers read closely and remember that characters tend to appear in a Lori Rader-Day book for a reason. Keep those little gray cells sharp, as the many threads introduced do have connections.

Some of the threads: Nurses who aren’t really nurses. Travelers from the train from London to Greenway whom Gigi talks to and who end up in South Devon, too. Man found dead in the River Dart, murdered. Other men in the village who seem healthy and too young to die are dying. Somebody is stealing jam and leaving a muddy boot print. Gigi’s wisht man has been seen by little Doreen. Mrs. Poole, the mother of a child kept by her from evacuating arrives at Greenway in distress, and then she is missing. Bridey is friendly with the local doctor, but when he makes a romantic move, she can’t respond. Gigi has hidden money and hidden motives in her role as an evacuation nurse. And much more. Lori Rader-Day keeps it all flowing toward resolution, both on the worldly stage and the smaller one starring Bridey.

The first month or so of this story goes a bit slower than the rest of the time forward, but it doesn’t drag. It is an important time of setting up characters and mysteries and daily life of the evacuation, including what goes on in the village below Greenway. The reader is learning about who is who and who does what and that the Germans aren’t the only destructive force to fear. And then, a year has soon passed at Greenway, and lots of changes are taking place again. To tell beyond the early days at Greenway would deprive readers of discovering all the intrigue and revelations for themselves. There is so much good story still to come, and I was quite happy with the way it all wrapped up in the end, threads coming together and mysteries solved. I think the author was very much in tune with what ending was consistent with a WWII story, and it shows great judgment not to try and rewrite history.

Multiple characters are used to voice the narration of the book, which gives readers the edge of knowing more of what’s going on than any one of the characters. It’s Bridey’s voice we hear the most, which is fitting, as her journey is the one we are following to fruition. I enjoy this use of multiple voices in separate chapters. They’re like the different puzzle pieces used to make the picture whole. And, oh those characters, they are pure Lori Rader-Day magic, one of the things she does best. She brings characters to life with a deftness born of raw talent but perfected by hard work. The character of Bridget/Bridey shows such growth that I am actually proud of her, like she’s someone I really know. That’s how well-developed characters are supposed to affect readers. And, Gigi is a character who shows me not to judge too quickly or assume you know her too soon. So many characters have poignant stories in this book, and readers will follow them all through the sadness and the joy they invoke. Death at Greenway tells the stories of ordinary people inside the extraordinary story of war, and it feels very intimate. That’s the accomplishment of a skillful storyteller.

I thoroughly enjoyed Death at Greenway, and I think readers are in for a treat. Don’t get hung up in what category to pigeon-hole this book. Just enjoy the captivating read that is sure to land this award-winning author even more tangible plaudits.

I thank NetGalley and the William Morrow Publishers for an advanced reader’s copy of this book.