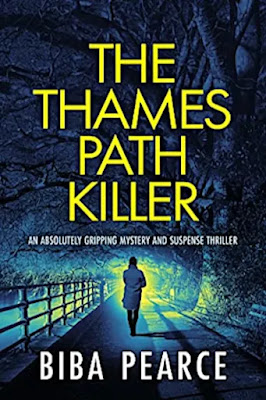 Biba Pearce is a new author for me. I usually have a reading list geared toward my reviewing so I don't often get a chance to pick a random book for reading. But, occasionally I find myself at loose ends and wanting an author I haven't yet read. So, that's how I found Biba Pearce and The Thames Path Killer, the first book in the Detective Rob Miller mysteries. After reading it, I bought the rest of the series so far, three more adds to my Kindle.

DI Rob Miller has caught the first big case of his career as a member of the Met's Southwest London Major Investigation Team based in Putney. It's his first time as the Senior Investigating Officer, and it's a brutal murder. A young woman has been savagely attacked at night on an especially dark part of a Thames River path, the life strangled out of her. There is reason to believe the murder is personal, a revenge killing, but the fiance of Julie Andrews, the victim, tells Rob that Julie had a stalker, a stranger to her, and that she had reported it to the police.

Rob is under lots of pressure from his DCI to solve this case, as the higher-ups are pressuring DCI Lawrence. Working with his team day and night to gather information and chase down any similar cases, Rob's home life is unraveling. His fiancee Yvette is unhappy that Rob is working so much, and letting him know it. Things get even more intense when a second murder of a young woman occurs bearing all the signs it's the same killer.

After the second murder, the deputy commissioner insists that another team, with more experience, be brought in from Lewisham MIT to oversee the investigation. Of course, Rob isn't pleased, but he finds the new Senior Investigating Officer, DCI Jo Maguire, easy to work with, and together they uncover evidence that this serial killer has more than their two victims. Now, they must work with unabated fervor to prevent the Suffolk Strangler from claiming more lives.

The Thames Path Killer is a police procedural, but the police work was nicely blended with the character development and a compellingly layered story. It wasn't all sharp edges of the investigation, and yet, the investigation is fascinating. The story hits the ground running, with the first murder opening the action. The scene is perfectly set, with a rainy, dark, isolated tow path and an anxious young woman hurrying along it to get home, but, of course, the killer is waiting. The suspense and action just keep continuing from there in a well-paced, intense plot. I found the layers of discovery by the detectives sustaining the suspense without lapse.

I'm a reader who needs engaging characters, and Biba Pearce accomplishes that. DI Rob Miller is a character whose development thus far provides a capable, likeable, decent person to root for. I felt the author's unveiling of Rob's character and the other characters, who promise to be regulars, was well-measured, leaving readers to expect more interesting developments. I was happy with my diversion into new author territory with this book, and I am looking forward to reading the next three in the series.