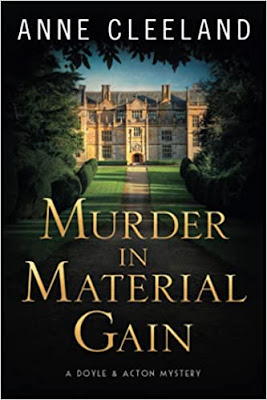 I’m always delighted to have a new Doyle and Acton book to read. The unlikely pairing of DCI Michael Sinclair, Lord Acton, who is English aristocracy, with DS Doyle, who is an Irish plain-spoken red-head with a touch of the fey, keeps the action both expectedly exciting and thrillingly unpredictable. Murder in Material Gain is Anne Cleeland’s fourteenth book in this series, and it’s as twisty and full of crisscrossing plots as all of the ones that have come before. Doyle may continually be trying to curtail Acton’s less than legal proclivities, but their unique relationship and ability to foil the villains keeps readers glued to the page.

Sir Acton/DCI Acton and Lady Acton/DS Kathleen Doyle have spent their Christmas holidays at Trestles, Acton’s ancestral estate in the country and are still there on an extended holiday stay. Acton thinks it will be good for Doyle, who had needed a pause due to her hand injury, and, in addition, he does love his family home. Doyle would rather be back in London in their flat and back at work, but she’s resigned herself to a longer stay than she preferred. She is keeping in touch with the criminal world through her volunteering in Wexton Prison’s ministry program, where she is teaching a Bible study class to women. Kathleen’s friend Dr. Okafur is in charge of the program, along with the former Detective Chief Superintendent, a prisoner now. Also at the prison, or rather in prison, is Martina Betancourt, who brought chaos and murder to the flat where Acton and Doyle live with their toddler son Edward. Murdering has landed Martina in prison, but due to her quasi-friendship with Kathleen, the sentence is a lighter one than Martina deserves. Doyle admires Martina’s religious dedication but recognizes that it too often crosses the line into dangerous zealotry.

Fans of this series will vividly recall the ordeal that Doyle experienced at Wexton Prison, and yet, Acton is willing to go along with Doyle’s volunteerism there. In fact, he drives her there and waits in the car outside until she finishes. Even with Doyle pregnant with their second child, Acton seems okay with this arrangement. Doyle calls it “a shrine worthy miracle that her husband had acquiesced in this plan.” Of course, Acton is never one to be cavalier about his wife’s well-being, so there is purpose and care behind his ease. Idle action is not something in Acton’s vernacular. Doyle soon realizes that it is the prison’s ministry itself that is under Acton’s watchful eye and plotting.

Trestles, while at this time, seems like a peaceful respite, has seen plenty of violence and turmoil in its history, and there are ghosts, especially the Knight, still roaming around who know all about it. It’s Doyle’s unfortunate gift to be able to see the ghosts and hear their complaining. And, plots and betrayals are still whispered behind closed doors, as Acton’s mother lives in the Dowager house on the estate, and she is keen on seeing her son unseated from his head of the family. Never on good terms, mother and son have been completely at odds since Acton married his Irish bride. Acton brooks no disrespect for his wife, and his mother does nothing but disrespect Kathleen. Sir Stephen, Acton’s cousin, is in league with Acton’s mother against her son. So, there is this undercurrent of trouble in the story, too, that could rear its ugly head at any time. At present, the Dowager seems to be courting the local priest, who is only too happy to eat meals at the Dowager’s table. It is a curious relationship, but before we can ascertain if Acton’s plotting mother means to use the priest in her schemes, the poor man is found murdered on the grounds of the estate. Yet, the priest has his secrets, too, which are discovered after his death.

The problem in Murder in Material Goods is a good thing gone sideways. Donations to Wexton Prison’s ministry program are at a healthy level, and nowhere better than prison for money to corrupt. Doyle catches on rather quickly that there is skimming going on from the ministry’s coffers, and Acton knows about it. But who are the blacklegs in this scheme? As usual, there are twists and turn that lead Doyle and readers astray, but Doyle is nothing if not persistent. Uncovering the truth and uncovering Acton’s behind-the-scenes dealings may take her on a twisty road, but she always stays the course and arrives at her destination. She once again has a pesky ghost in her dreams, this one is an artist from the earlier years of Trestles, urging her to discover what Acton is up to. The ghost tells Doyle that Acton is moving the chess pieces furiously, but he is moving them around her, once again trying to shield his lovely wife from some sort of ugly crime. This artist ghost keeps lamenting about a green axe he buried but is now lost to him, but Doyle doesn’t know where to look for it. These ghostly dreams are vague, but they eventually help Doyle to get to the bottom of it all, as usual.

I am so fond of the characters in this series. Doyle and Acton really need no further accolades from me, but the supporting cast is fascinating, too. Readers can easily find themselves caught up in the daily lives of these characters, as well as their parts in the bigger dramas. Reynolds, Acton’s butler, is one of my favorite characters in the series, besides Acton and Doyle, and Doyle does something wonderfully magnanimous for him in this book. Reynolds seems to get caught quite often between his orders from Acton and the pleadings of Doyle. Savoie, the French master criminal, is another character I always enjoy encountering in the stories. His life has changed immensely since this series began. With his adopting a rival criminal’s young son when said rival ends up dead, Savoie has shown great depths of responsibility. I did miss seeing DC Thomas Williams in this book. His life has taken a sharp turn, too, from being smitten with Doyle to becoming Acton’s right-hand man and now newly married. I can’t wait to see where that marriage goes, as he is married to a woman who is also loyal to Acton. DS Isabel Munoz, who seems forever annoyed with Doyle but whom Doyle meets head-on admirably, is MIA in this book, too, but I suspect both she and Williams will be back soon. There is never a lack of interesting characters moving in and out of Lord and Lady Acton’s lives.

Once again, Anne Cleeland has given readers, especially we insatiable fans, an Acton and Doyle story that checks all the boxes. And, the last box checked is an eager anticipation for book fifteen, as the chilling epilogue leaves much for speculation. I can’t wait!