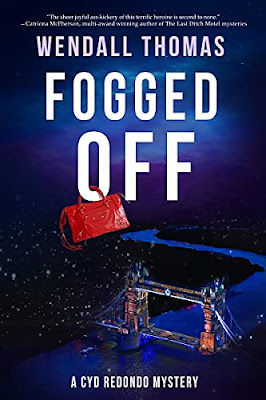 It bears saying again that it’s been a hard two years for everyone, and as we slowly return to missed activities we enjoy, reading a new Cyd Redondo book, Fogged Off, by Wendall Thomas helps make our smiling and laughing return in force. Reading has always been a constant source of pleasure for me, and when I can read something that makes me laugh out loud, I know it’s a balm for my soul. Wendall Thomas’ book series starring Cyd Redondo is a guaranteed mood lifter. The characters, the plot, the dialogue, the setting, and that unique voice Thomas brings to Cyd combine to take the reader on a wonderfully wild adventure.

In reviewing the first book in this series, Lost Luggage, I said that Cyd Redondo is one of the best new characters in the mystery/crime genre. After reading two more Cyd Redondo books, I’ll just suffice it to repeat that there are characters that one falls in love with, and Cyd is such a character. She has a knack for bargains and smart deals, the ability to live with an extended family who is overprotective, and the compassion to take care of those she loves and serves. With travels to Africa, Australia, and England, Cyd is no longer the travel agent who doesn’t travel.

A unique aspect of Cyd’s travel agency (her family’s legacy from her great-grandfather Guido Redondo) is that it caters to senior citizens, and Cyd’s affection for them is infectious. One of her long-time clients is Shep Helnikov, who splits his time between four months of the warmer season in London to the rest of the year in dear old Brooklyn. Shep is an expert on Jack the Ripper, having researched him, had a book (Jacked!) published and writing a new book (All Jacked Up) about Jack. Shep leads Jack the Ripper tours and teaches a course in Homicide History at a university during his time in London. Cyd found Shep the apartment he rents in London every year and thinks of him like one of her uncles.

In a book that will provide many laughs, this story starts with sad news. Shep has died of an apparent heart attack in London. His colleague Dean Dean McAfferty at Brooklyn College, where Shep taught during his time in the States calls on Cyd to go to London and see about the return of Shep‘s body and academic papers. It’s not an entirely unusual request, as Cyd’s Uncle Leon is Shep’s executor, and the colleague is willing to give Cyd a department credit card to foot the transportation, hotel, and an expense account. And, Cyd’s Uncle Leon is accompanying her, much to her Aunt Helen’s displeasure. Since Cyd is going to take care of all the work in London to bring Shep home, she has Uncle Leon sign forms from the State Department designating her as acting executor.

As sad as the occasion is which brings Cyd and Leon to London, it’s London, and Cyd can’t help but be wide-eyed at the history and majesty around every corner. But, she is ogling it alone, as Uncle Leon has flown the coop, popping into a limousine waiting for him at the airport, while Cyd’s ride was a bit of a downgrade. Luckily, she got an upgrade at the fabulous Savoy Hotel because Uncle Leon was staying elsewhere. Having bought British cell phones before leaving the airport, Cyd is at least hopeful her uncle will keep in touch. He says he’s there for his work, which is taxidermy, but Cyd is skeptical.

Returning a body from overseas is not a simple matter, nor an inexpensive one, so Cyd Redondo of Redondo Travel is always on the ball and gets her clients repatriation insurance, except Cyd’s irresponsible cousin Jimmy had made a change in Shep’s travel plans for him and failed to reinstate the insurance after the change. Shep’s colleague Dean Dean has also agreed to the college paying the $30,000 in repatriation fees for the body’s shipment. It’s Cyd’s job to get all the paperwork in order and signed and turned in to the funeral home handlers, The Heeps (hey, I don’t make these names up, the author does), who process the papers and body for travel.

Our favorite travel agent hits the ground running, as always, and sets the tone of fast-paced action for the rest of the book. She goes from the U.S. Embassy, where she learns she’s missing a notary form, to Shep’s apartment, where she encounters a female “friend” of his nosing through his belongings, to the outfit called London Afoot that employed him for the Jack the Ripper historical walks to drinks in a cave-like setting she falls in love with to a Jack the Ripper tour that she missed due to faulty information.

Cyd must wait through the weekend to obtain the additional paperwork on Monday from a notary. What a weekend it is, too, no sitting around having tea and being a tourist for Cyd. She sees The British Museum only because visiting it connects to her work. Of course, she savors every part of London she encounters. Starting with a Saturday memorial gathering for Shep, at which Cyd meets the rest of the London Afoot guides, the story snowballs into a dramedy of staggering genius. It could be said that only Cyd Redondo could uncover the backbiting world of Jack the Ripper tour guides, track down new clues of Shep’s as to the identity of the Ripper, run (again) into an ecoterrorist and become involved in an endangered species battle, have an encounter with a former lover, and hunt down a murderer. It could also be said that only Cyd Redondo could handle all challenges thrown her way. When Shep’s death is ruled a homicide, Cyd barely has time to grab a pair of new shoes on sale. There are no lulls in the plotting of Fogged Off. It’s fast, it’s furious, but it is always clear.

Wendall Thomas has without a doubt created some of my favorite characters for this series, and the more readers get to know them, the more fascinating we realize they are. Cyd’s father died when she was young, so she’s grown up surrounded by his brothers/her uncles to help raise her. Going into the family travel business has kept Cyd especially close to her Redondo family, and, well, she and her mother live in the Redondo family home. The books in this series are revealing to readers, and to Cyd, that there is an unexpected and fascinating depth to her family members. Uncle Leon in Fogged Off proves to be someone with worldly connections, a debonair operator across the pond from the Redondo familial surroundings. But, Leon and the other uncles always have Cyd’s back, and this family loyalty gives readers a warm, safe feeling. Oh, and look for the mention of the Redondo “eyebrow raise” that all the uncles have.

The characters who are exclusive to each book are always ready for their closeup (Mr. DeMille), too. Quirky and unpredictable describes the lot. In Fogged Off, the Jack the Ripper tour guides each have their own hook to attract customers, and they wear clothes that are more like costumes to distinguish themselves, too. Cyd’s community of Bay Ridge in Brooklyn provides an endless supply of colorful friends and a nemesis or two who enrich our knowledge of Cyd. The different female residents of Cyd’s community that float in and out can be a little crazy, sometimes in the truest sense. I think there might be a sign as you enter the Bay Ridge community that says, “No shrinking violets allowed.” As if the character pool wasn’t complete enough, there are some reappearances of a few characters from the previous novels, ones who played dramatic parts in Cyd’s unplanned adventures, and one who readers and Cyd would like to be around more.

Can an inanimate object be a character? Well, I think in view of the actual life it holds from time to time and the amazing effects its contents have on Cyd’s life, we can give her purse this status, her precious red vintage Balenciaga bag. I think it was a stroke of absolute brilliance to include Cyd’s Balenciaga bag on the cover of the book. So many touches of witty connection run throughout this series. Readers will be charmed and smitten by what ends up living in Cyd’s bag this trip.

I want to stress that Cyd is only 32 years old, and there are plenty of young characters before I add one more reason I adore this series. Cyd doesn’t look at senior citizens as too old, too late to enjoy life’s adventures. As much of her travel business deals with the older generation, she is determined to ensure her clients, old and young, have the best travel experience they can. That the author showcases seniors living life to the fullest, including Shep and Uncle Leon, means something to me personally. This positive attitude toward seniors is a hopeful, bright spot from which I take inspiration.

Writing a review about a book that I so thoroughly enjoyed sometimes results in a rather lengthy review. I may have rambled on about the characters a bit, but they are such great characters. Wendall Thomas is sure to reap the rewards of awards with Fogged Off.  I highly recommend it and the whole series. Someone could read this book without reading the previous two, buy why would you. You really don’t want to miss a thing (eh, Steven).

Thanks to the author and to NetGalley for an early copy of this book.