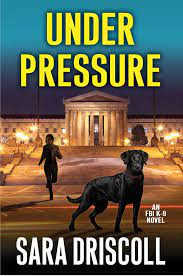 The sixth book of Sara Driscoll’s FBI K-9 series, Under Pressure, deftly carries on the consistency of outstanding story that I’ve come to expect in this series. This series has proved itself a solid part of crime/mystery fiction’s finest and one of my favorites. The plot, the pacing, and the characters (both human and animal) work seamlessly together to keep the reader reading just a little bit more and then a little bit more. I always find it hard to find a stopping point for my bookmark, which can lead to some seriously late-night reading. Meg Jennings and her search-and-rescue Labrador Hawk lead the way as readers follow them into another dangerous case, showing us just how valuable an asset the FBI K9s are.

FBI K-9 Handler Meg Jennings and her D.C. firefighter/paramedic boyfriend Todd Webb have taken the plunge and moved in together. In what is the best of living situations, Meg’s sister Cara and her boyfriend, Washington Post journalist Clay McCord, have also moved in together, with each couple occupying an identical half of a duplex. The proximity of the couples is a good arrangement, as McCord has become an unofficial resource in Meg’s FBI cases. No sooner are the moving boxes unloaded than another case for the FBI’s Human Scent Evidence Team comes up.

Usually, Meg and Hawk work with Brian Foster and his German shepherd Lacey under the direction of Special-Agent-in-Charge Craig Beaumont, but in a first time inter-departmental collaboration for the K-9 unit, they will be working with the Organized Crime Program and the Diamond Trafficking Program. The issue at hand is conflict diamonds, known also as blood diamonds, that are being brought into the United States by the “Philly Mob.” The goal is to have the dogs track one of the couriers and bust up the selling and buying of these illegal diamonds. The courier is an undercover FBI agent who is deeply embedded into one of the crime families and who will supply his scent for tracking. It’s an experimental endeavor, but Meg and Brian feel Hawk and Lacey are up to the task. Journalist Clay McCord reveals that he’s been working on a story about the Philadelphia Mob that includes conflict diamonds and other illegal transactions, which expands the scope of the investigation beyond just conflict diamonds and raises the stakes for both the mob and for those hunting for truth and justice.

Most of the action in Under Pressure takes place in Philadelphia, where the Italian Mob is heavily entrenched in their illegal activities. Sara Driscoll is one of the best authors I read who give a sense of place so clearly and interestingly. There’s no superfluous description of setting, but a thorough knowledge of it is apparent. There is an astute efficiency in every book of the series acclimating the reader to the lay of the land. I can imagine that someone who is quite familiar with Philadelphia feels themselves running alongside Meg and Brian and their dogs.

There’s always so much to talk about that the author does right in these books. Although I’ve commented in reviews of previous books in this series, I feel a review of any of these books is incomplete without a mention of how great the characters are. Those of us who have read all the books thus far would no doubt agree that we are heavily invested in Meg, Cara, Todd, and Clay, and that we are absolutely besotted with Hawk and Lacey, and the non-working dogs-- Blink, Saki, and Coy. The evolution of the main characters’ closeness has been a story in itself to watch unfold, and I look forward to further developments. And, a shout-out for the dialogue with its witty additions to an already cleverly written narrative.

I so highly recommend the FBI K-9 series and this most recent book, Under Pressure. From the insightful title of many connections to the exciting action and clock driven suspense to the characters who rise to impossible challenges, Under Pressure is another unmitigated success in this series of brilliant storytelling.

Sara Driscoll is the nom de plume for Jen Danna and Ann Vanderlaan, who collaborate on the FBI K-9 mysteries. Jen lives in Canada and is a scientist who specializes in infectious diseases (and yes, she’s been and is involved in COVID-19 research and trials). Ann lives in North Carolina and has expertise in many fields as a former research scientist, consultant, teacher (both medical and veterinary schools), software developer, and involvement in dog rescue and training. Jen and Ann, under their own names, have written a previous series together, the intriguing Abbott and Lowell Forensic Mysteries, which has five books thus far (and I hope more to come). The FBI K-9s Mysteries, written under Sara Driscoll, now has six books and definitely more to come. Jen Danna also has a new (two books so far) solo series, the NYPD Negotiators Thrillers, another exciting line of stories.