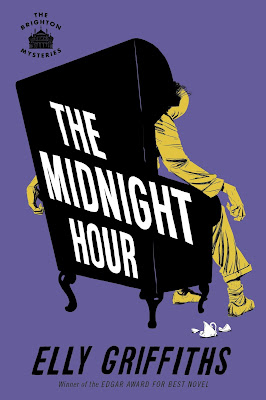 When the Brighton series by Elly Griffiths began in 2015 with The Zig Zag Girl, it was also called The Magic Men or Stephens and Mephisto series. The two main characters, DI Edgar Stephens and magician Max Mephisto are best friends, having met during WWII as members of the Magic Men, a small unit of men whose job it was to use illusion to deceive the Nazis and give the Allies the advantage. Over the previous five books of the series, and especially the last one, Now You See Them that jumped ahead ten years from #4, the characters and story lines have evolved to where The Brighton series more aptly describes the series. Elly Griffiths is such a brilliant writer/storyteller, and she knew that the ten-year leap was just the thing required at that point.
From book one, I've loved learning more about the 1950s in Brighton and the live variety circuit, then the winding down of the variety circuit and the movement toward television, and now the 1960s with its changes. I also have enjoyed the character roster growing, as Griffiths is a master of unique and mesmerizing characters, and more women stepping into leading roles. With the second book set in the 1960s (and the 6th book overall), the women of the series are getting their full due in the story line and running the show. But, I was delighted to still see a strong connection to the older days of the variety circuit in the story.
The mid-sixties in Brighton is on the cusp of change, but it is still very much a man’s world with women eagerly pushing the boundaries as they can. Our regular characters are well ensconced in their endeavors and pursuits, but as the author is always moving them forward, by the end of the book some of them will be on the cusp of change, too. Edgar Stephens is comfortable in his role as Superintendent and Emma Holmes, although married to Edgar and mother of three children, is more determined than ever to make her private detective agency a working concern. Emma was Brighton’s first policewoman, but married women aren’t allowed to be on the force yet. Emma’s business partner, Sam Collins, continues her full-time job as a journalist and is also working hard to make a success of the detective agency. Max Mephisto has established himself as a movie actor and is still married to the mother of his two young children, American actress Lydia Lamont. In fact, Max is currently living at his country estate in England while the movie in which he plays Dracula’s father is filming in Whitby. Ruby, Max’s daughter and former fiancée of Edgar Stephens, is a bigger celebrity than ever with her starring role in a British television detective series. DI Bob Willis is showing signs of growth in both his role as Detective Inspector and his mentoring of a female police officer, although he can’t change the rules, like women on the force not yet being allowed to drive police cars. The female police officer, WDC Meg Connolly, has stayed the course to be on the force despite the derision she faces from the male members. And, in speaking of the fantastic female characters, I can’t leave out Astarte Zabini, the medium, who has seen her share of challenges and maintained her autonomy. Of course, the characters either introduced or brought back from a previous book for the storyline of The Midnight Hour are all captivating and engaging, too.

Bert Billington, the renowned theatre impresario who started his career on the variety circuit, is dead at the age of 90, but old age isn’t a factor. Bert has been poisoned with rat poison, and although many people had reason to hate him, it won’t be easy to find his murderer. His widow, Verity, now 75, was once famous in her own right as Verity Malone, the most beautiful show girl and singer on the circuit. She and Bert produced three sons. Seth is a successful actor, and he is Dracula in the movie that Max Mephisto plays Dracula’s father. Son David has taken over the theatre business from Bert, and son Aaron owns a mechanic shop. It seems no one in Bert’s family would benefit greatly from his death, but Aaron suspects his mother Verity might have wanted Bert dead.

When Aaron shares his suspicions with the police, Verity hires Emma’s and Sam’s detective agency to investigate and prove her innocence. Verity prefers to deal with women in both the private and the police investigations, so it is WDC Meg Connally from the Brighton police force who conducts the interviews and develops a rapport with Verity. During the investigation, Emma and Meg become friends, as they share information and often join forces. Bert’s marital infidelities over the years left a trail of heartache and destruction, not to mention offspring, so the fallout from his affairs is a major part of the inquiries. The suspect list for Bert Billington tells a sad and sordid story of a self-indulgent life. Readers might be rooting for the killer to get away with the murder.

The Midnight Hour is by no means a diatribe against the obstructions to women’s independence, but Elly Griffiths does a deft job of showing how women are progressing in spite of the constraints put on them in the 60’s. The women are front and center in The Midnight Hour and demonstrating just how capable they are, dealing with those constraints to become more than the “female” roles society has assigned them. Emma must deal with being the one responsible for child rearing while pursuing a career she is both passionate about and excels at. Ruby is ahead of the curve by being an independent woman of means and success. Sam has had to use the advantage of her first name to get her jobs in journalism and prove she is equal or better than a male reporter. Meg is learning more about expanding her views of her abilities and those of all women. Reading The Feminine Mystique by feminist Betty Friedan is quite a shock to Meg, but it is presenting ideas about the strength and importance of women that will serve her well.

I highly recommend The Midnight Hour as another riveting read by the brilliant Elly Griffiths. I thank NetGalley and Quercus Publishing for an advanced reading copy.