We Begin at the End by Chris Whitaker: Reading Room Review 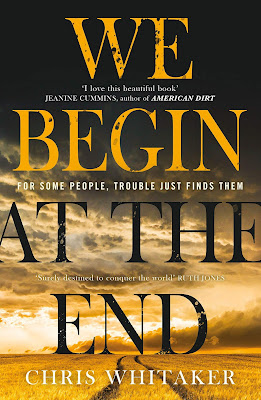 Thirty years ago, when Vincent King was just fifteen years old, he accidentally killed seven-year-old Sissy Radley, the younger sister of his girlfriend Star Radley. Vincent was tried as an adult and spent thirty years in prison. The testimony that sealed his fate was given by his best friend Walk. Walk was devastated at the part he played in Vincent's conviction, and even though Walk became Chief of Police of the small coastal California town where his friendships were his life, Walk was a prisoner of his own making for those thirty years, too. Walk's inability to move on from his idealized version of the world, where Vincent, Star, and Walk's girlfriend Martha were the future has made his world a small one. Walk's mission has been to look after Star and her two children, who are now thirteen (Duchess) and five (Robin). Walk can't really change the poor, depressing circumstances of Star and her children, but he does what he can to protect them. Walk's girlfriend from 30 years ago, Martha, moved on long ago to another town and a career of being a lawyer. Walk was stuck in a holding pattern, waiting for Vincent to come home.

Star Radley is thirty years past the promise of a happy life for a girl born beautiful and talented. She is an addict, drugs and alcohol, and she's living on fumes. Her two children, thirteen-year-old Duchess and five-year-old Robin, are mostly a fond memory in Star's addled brain. Duchess is the care taker for her brother Robin and would do anything for him, often going without food so he can eat. It is Duchess who shows the strength and responsibility in the family. It is Duchess for whom the reader can't stop reading this story. Her fate is the one in which we become invested. Like Duchess is willing to endure any misery to ensure that Robin is loved and provided for, the reader will suffer through the heartbreaks, one after another, of these two characters to keep hope alive.

Vincent is finally released from prison thirty years after his incarceration, but don't expect a happy return to his hometown. Oh, he returns, and he doesn't mope around. He starts fixing his house up that he left all those years ago, when his parents still lived in it. But, shit happens, and it seems to happen to the people who least deserve it in this story. Walk is there for his friend, but Walk himself is broken and has a debilitating disease that he's keeping secret. Star is no longer an option for Vincent, and soon her situation becomes more tragic. Did I mention that this story is achingly sad? At one point in the story, Duchess thinks that she surely is due some good luck, but good luck seems an unattainable dream for the down-trodden characters of We Begin at the End.

There's so much story I haven't touched upon in this review, but to say more would be a disservice to readers yet to begin their journey through this tale. I was deeply affected by this book, but I can't say I enjoyed it. Sometimes, a powerful read is like that, and sometimes enjoyment isn't the goal. I'm still trying to sort through what to take from this read. Obvious is the futility of living in the past, and how it occludes any meaningful life in the present.  Of course, it's grief and guilt that make an albatross of that past.  Where's a good grief counselor when you need one?  Cape Haven could surely have used one.  Reading and reviewing We Begin at the End by Chris Whitaker has left me spent, but I will forever keep the character of Duchess Day Radley, self-proclaimed outlaw in my mind and heart, and I will dream for her a beautiful life.