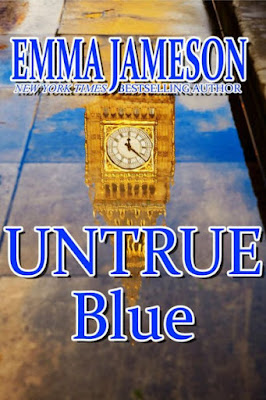 A new Lord and Lady Hetheridge book by Emma Jameson is a read I always look forward to, as the characters and the plot are steadfast in their deliverance of an entertaining, thrilling story. Untrue Blue is the 7th book in this series, and once again, it's my favorite. I've had seven favorites now. Jameson never shies away from taking the characters on a roller coaster of emotions, and readers are swept up (and down) in those emotions, too. The stories are fraught with danger for the characters, too, and the suspense that builds toward a confrontation with evil causes me to remind myself to breathe.

I can't stress enough how this series should be read in order, starting with Blue Ice. There's just too much great story and character development that you would miss if you did otherwise. Where the characters are in Untrue Blue means so much more when the reader has suffered through their growing pains with them. <br /><br />Do not read past this point if you are just starting the series.

In Untrue Blue, Kate (Lady Hetheridge) is on leave from the London Metropolitan Police and on bed rest for her final month of pregnancy. Tony (Lord Hetheridge), retired from his position of a Superintendent in the MET, is fully into his work as a PI and sometimes consultant to the police. DI Paul Bhar is a delighted new father and is married to Emmeline. There's lots of good feeling for these couples and friends, but a death among Kate's and Paul's colleagues stuns everyone (and readers). DC Amelia Gulls is discovered dead in her flat, murdered by an unknown assailant. Even though Kate is on bed rest, she joins Paul and Tony, who has been called in as a consultant, in trying to find the murderer. Granted that Kate has to work at home, but she and Amelia shared a bond of females struggling to be taken seriously on the force, so she will do what she can from her bedroom confinement.

Amelia Gulls had been working as an extra pair of hands on three separate cases, and the investigation into her death starts with looking at what she had found on those cases. Turns out that there are cross-over connections in two of the cases that will lead those investigating on a wild ride, a ride that readers will follow on the edge of their seats. I prefer to let readers experience the investigation without further description on my part. It's complex and exciting, and the losses leave big questions on who will fill certain shoes in the next book. Enjoy.