The Corpse with the Granite Heart by Cathy Ace: Reading Room Review 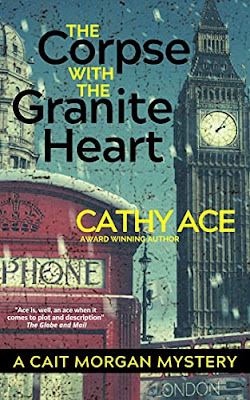 I used to be a real stickler for reading a series in order, start with #1 and proceed, and I still prefer that. However, with age comes letting go of some of my hard, fast rules and learning to be more flexible. I have wanted to read Cathy Ace’s Cait Morgan series for some time, and I kept getting further and further behind. Well, with this year’s book, The Corpse with the Granite Heart, #11, I decided to dive in. I’m so glad I did.

Cait Morgan and her husband Bud Anderson have traveled from their home in Canada to visit their good friend John Silver in London and meet his new fiancée, Bella Asimov. Cait, who lived and worked in London previous to her move to Canada, is looking forward to visiting favorite London spots with Bud and enjoying the Christmas cheer of the season.

Though they both are fighting jet lag the afternoon they arrive, they are scheduled to attend a dinner at John’s fiancée’s home. The dinner is a strange affair to begin with, a morbid memorial dinner for the fiancée Bella’s recently departed father. The recently departed Asimov patriarch, Oleg Asimov, was an ardent admirer, if not an expert, on Shakespeare and financially supported local projects and endeavors concerning the famous playwright. His family thinks it was his only redeeming quality. Upon arriving, Cait realizes she knows Bella’s sister and brother-in-law from the time in Cait’s life before she gave up on her beloved London, a time in which they were part of her trouble. But, Cait has impeccably good manners and knows that they are there for John, not old grudges. All Cait and Bud really want to do is get through the dinner and go back to John’s to collapse in bed. However, it turns out that their rest will be delayed.

As the guests prepare to go into dinner, an odd routine of everyone taking a bathroom break before entering the dining room is announced. While the business of taking care of business is occurring, there’s a burst of activity at the front door as Cait’s and Bud’s driver rushes in to raise the alarm. Someone has fallen from the top room of the house to the driveway below. Cait, who is a well-respected criminal psychologist, and Bud, who is a retired cop, immediately react and get involved. The dead person is Sasha, Bella’s sister, and suicide is suspected.

A man who is obviously law enforcement but rather shadowy arrives with his subordinate to question everyone, still leaning towards a suicide. Cait has misgivings about that call and realizes that the case is being handled very carefully, which is no doubt due to the revered standing of the family and the father’s wealthy success. At last being given clearance to go back to John’s house, Cait hopes that she and Bud can go back to their plans of just being tourists.

Of course, a trip filled with visiting museums won’t happen, as the story is obviously going to involve Cait’s detecting skills. When another death, Sasha’s husband, occurs at the Asimov mansion on the hill, nothing seems done and dusted except for the bodies. And, there will be more death to befall the house. It’s a treacherous time to be in Beulah House, and the reader has to wonder if it will be a case of “then there were none.”

The detective, Mr. Worthington, finally checks out Cait’s credentials, which include solving other murders and an eidetic memory, and allows her to help him. There are all sorts of peculiar and sordid facts about the Asimov family, but who seems to want to kill them off? It’s interesting to watch the clues unfold and the guilty revealed. A nasty business it is, being at the top.

I enjoyed this, my first Cait Morgan, book. I hesitated to jump in on #11, but author Cathy Ace makes it possible to glean past information needed for the present story. I quickly became a fan of Cait and Bud, with their easy-going relationship and trust and respect for one another. There were many unreliable characters, for whom it wasn’t clear if they were trustworthy or not, and that added greatly to the suspense, which built with every death. The characters’ fear of who would be the next victim is keenly felt by the reader. There’s plenty of atmosphere to soak up in this narrative where money has built an empire of ill will.

I hope to go back and pick up at least some of the previous Cait Morgan books I’ve missed, as I’m curious about Cait’s and Bud’s relationship in its beginning and the cases they've solved together. Of course, I’m not surprised I would enjoy this series, as I’m a fan of Cathy Ace’s writing in her Wales series and her stand-alone, The Wrong Boy. Ace has a good eye for interesting characters in all her stories, and a deft hand at writing stories that capture the flavor of a setting. The use of each chapter being headed by a quote from a Shakespeare play foreshadowing the chapter’s contents was a clever vehicle to use for The Corpse with the Granite Heart, as it connected to Oleg Asimov’s one true passion and created a dramatic atmosphere. So, I will happily recommend this latest book in the Cait Morgan series and the series itself.

Full disclosure: I received an advanced copy of The Corpse with the Granite Heart from the author.