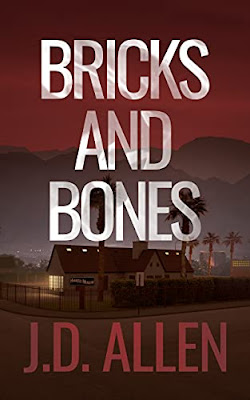 “When things went sideways like this, there was a momentary silence in your head while you inventoried all your own major body parts. No matter what was going on around you, your brain took the time. Head, good. Chest, fine. Blood on the face. No pain. No holes. Blood’s not mine. All checked out.”

When asked how a Jim Bean (Sin City) book by J.D. Allen is, I pause, because I’m confessing before I answer. I never thought I liked a story set in Las Vegas, but J.D. Allen proves me wrong with every Jim Bean story I encounter. I quickly follow that with the declaration that J.D. is such a talented writer and storyteller that she makes Las Vegas come alive in the most interesting of ways through her characters and plots. The best of what happens in Vegas is Jim Bean and his “uncomplicated” cases. As the clues turn into evidence, the suspense builds at a thrilling pace, leading Jim Bean into that abject danger in which he always lands himself.

Las Vegas Private Investigator Jim Bean has been called to the home of Irving Silverland, former player, “made man,” of one of the Vegas mob families. Silverland hands Jim a check for $10,000 to investigate a robbery that occurred at the Macabre Burlesque Theater, owned by the Silverland family and now run by Irv’s daughte, Bella. The items stolen are of an unusual nature, as they are from the Murderabilia Museum part of the business. Murderabilia is gruesome displays of items owned by murderers, and the selling and buying of it has become a highly competitive business. Missing are a brick from Lizzie Borden’s fireplace where she supposedly burned evidence of her guilt, garrotes belonging to William Gacy, and a glove of Jeffrey Dahmer’s. Jim doesn’t understand the big attraction of these ghoulish “artifacts,” but his finances don’t allow him to ignore the large check offered. After all, it seems like a simple straightforward case of burglary, nothing complicated. One of Jim Bean’s endearing qualities is his ability to believe his cases won’t get complicated. He even decides it will be a good case to let his assistant Sandy finally get out in the field a bit.

Jim starts his investigation with Bella Silverland at the Macabre Burlesque Theater and sees firsthand the bizarre world of murderabilia. His investigation takes him to more places of the odd and offbeat, including The Ghost Hunter’s Museum, where he finds that TV personality and owner Grey Powers is also interested in murderabilia. Jim makes a stop at the Mob Museum, too, where he talks to ex-FBI Special Agent Pearl about the Silverland family, as Pearl was involved in shutting down the Savino mob that Irving Silverland served in the 1980s. Bean uncovers useful information from all three individuals, but each one has secrets they are holding close to the vest.

Jim gathers quite a bit of information about the intriguing Silverland family as he tries to discover who had a reason to steal the particular murderabilia objects. Along with her father’s colorful past, Bella’s mother was the Sensational Cecilia, a much beloved performer who also had an interest in the paranormal, making contact with those on the “other side.” And, Bella had a twin sister named Nina, who disappeared when they were seventeen years old, almost twenty years ago. Nina is presumed dead by most, including her father and sister, but like so much in Vegas, that turns out to be a smoke and mirrors act.

When Detective Noah Miller shows up to Jim’s office, Jim and Sandy know something is up and it’s not good. Miller is there to inform them of the murder of an employee of the Macabre Theater and friend of the Silverland family. Of course, it bleeds over into Jim’s case, as the murder weapon was the stolen Izzy Borden brick, with which the victim was bludgeoned to death. As usual, Miller warns Jim to stay away from the murder case and let the police handle it. As usual, Jim isn’t going to do that, but in all fairness, it does involve one of the stolen objects he was looking for.

With the first murder occurring, the complications begin, and it’s not long before the “big picture” is realized, connecting the stolen murderabilia and the murders and the missing/not missing sister and the dark past of Ely coming to light and the ill-gotten treasure of a ghost. It’s a deadly treasure hunt in the desert with a gobsmacking twist. J.D. Allen gives all readers a reason to like Vegas.