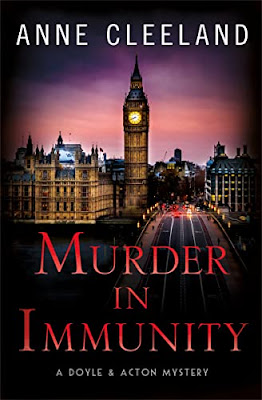 DS Kathleen Doyle is pregnant and about to give birth at any time, but Doyle wants to keep busy, as she not good at sitting still waiting. Of course, that also applies to her husband’s, DCI Michael Sinclair’s/Lord Acton’s*, complicated schemes and plotting in the world of crime. Doyle is never able to sit back and let things play out when she’s got an inkling that Acton is up to something, even if a ghost from her past tells her to stay out of it. In Murder in Immunity by Anne Cleeland, Acton is definitely up to something, but, as usual, he wants to protect his lovely wife from the ugliness of what inevitably happens when he’s solving a problem. DCI Acton, also being Lord Acton, has many resources at his fingertips, but underestimating his determined Irish wife, who is fey and can tell when someone is lying, always leads him to getting caught red-handed, sometimes with his hand in the proverbial cookie jar by the fair Doyle.

In the last tale of our two indefatigable partners, Doyle uncovers a theft of charity money being run in Wexford Prison. That scheme is not behind her yet, as the Public Accounts investigation has been linked to it. Acton is busy trying to do damage control in the Met, and seeming quite worried to Doyle. Doyle, although working, has been largely sidelined due to her pressing condition to birthing her second child. When DI Thomas Williams, friend of both Doyle and Acton and cohort of Acton’s, requests she accompany him to a crime scene, she eagerly agrees. Doyle’s quasi-friend DS Isabella Munoz is overseeing the crime scene, where a man and a woman lie dead on the kitchen floor. Williams is quick to judge it as a case of grave-yard love, where one of the two lovers or former lovers kills the other to prevent anyone else from having them and then usually commits suicide afterwards. Doyle and Munoz aren’t so sure about it being a grave-yard love murder/suicide, and they tell Williams they’d like to do a little more investigating. So, the three of them decide to keep the case open until a few questions have been cleared up. One of the odd items about the murder victim, the woman, is that she has a connection to the Public Accounts investigation, and that one really puts a wrinkle into it for Doyle.

The playground where Doyle and Reynolds, the ever-faithful butler and now stand-in nanny, take Edward to play with his friend Gemma, daughter of Doyle’s regular nanny, who has just given birth to her own son, is an active source of information and revelations in this story. Phillipe Savoie, a maybe/maybe-not reformed criminal mastermind also brings his adopted son Emile to the playground during their afternoon meet-ups. Mary, mother to Gemma and newborn son, is having a bit of difficulty getting back on her feet, as her husband has just died recently, another death that comes under suspicion of murder. Everyone, from Doyle to Reynolds to Savoie to Acton’s newly discovered half-sister Callie, is pitching in to help Mary. Doyle connects several dots at these playground sessions, but she also runs into some smoke and mirror puzzles.

What bothers Doyle the most is that someone is getting away with murder without any consequences, murders of people that should not have been harmed. She needs to figure out why the immunity. She has her suspicions of who is responsible, if not the trigger puller, for the murders, but it’s frustrating for Doyle that the person seems untouchable. Of course, Acton is smack dab in the middle of the whole mess and having to be careful that he doesn’t make a misstep that could bring the House of Acton crumbling down. And, there is yet another person who seems to have been granted immunity in shady dealings, but that often works in Acton’s favor. That may not continue to be the case though.

I love spending time with Doyle and Acton, the improbable couple who are perfect for one another. I enjoy reading the ways in which they care for one another under stressful, high-stakes circumstances. They both have such a great understanding of each other and use that understanding when dealing with opposite views on a matter. They have brought much needed comforts to the other’s life. Kathleen’s love for Michael has given him a world he never dreamed of, didn’t know to dream of it. Who ever thought that Lord Acton would be friends with a Roman Catholic priest? A wife and two children have kept him from a cold, loveless life where only money matters. Oh, money still matters very much to him, but it doesn’t rule his heart anymore. Michael has given Kathleen a financial security that she’d never had before, and while money doesn’t guide her in any way, it’s nice to not have to worry about it. Kathleen has finally gotten used to having the butler Reynolds in charge of the household and is grateful for his excellent cooking and genuine affection for all the children in their orbit now. Both Acton and Doyle have learned to compromise in the language they use, too. Michael isn’t all upper crust talk anymore, and Kathleen is getting an education in vocabulary from Reynolds she never thought she’d need. Of course, I still enjoy her Irish down-to-earth way of putting things, which I doubt and I hope will ever go away. She sums up their relationship to Michael by saying a typical Kathleen utterance, “I am the ying to your yams.”

Readers get to see many of their favorite supporting cast of characters in this story, and that’s always a treat. Munoz and Williams and Reynolds and Mary and Tim and Edward. There are a few new characters who may not be hanging around for long, or who might prove problematic for some time. A woman claiming to be Doyle’s long-lost aunt, who Doyle, being fey, knows is lying. The surprise new sister for Acton, Callie, is proving to be a quite the mystery still, and her mother isn’t someone to which you let your guard down. Callie is filling in as a nanny some for Edward, and she puts him in danger at one point in the book. I don’t know if she can be trusted or not yet. There is some personal animosity between Acton and Savoie in this story, but it looks like it might be cleared up by a mutual agreement. And, I can’t forget to mention the rotating ghosts that appear to Doyle in her dreams. I am delighted with Doyle’s interchanges with them, and with the latest ghost, Mary’s first husband, comes an unexpected warning for the future, that Edward should beware of a girl named Gina when he is at university. Anne Cleeland has created an outstanding cast for these outstanding stories. The personal relationships between all the characters are what are dear to me, and the growing families are so satisfying to read about. Doyle and Acton have been so brilliantly developed, and the recurring characters also receive the author’s full attention and deft development. Of course, there are plenty of secrets the characters hold on to, lending an air of mystery and twist to the stories.

There are so many fans of the Doyle and Acton series, and we all are so happy that there are two books a year to enjoy. Murder in Immunity was just the read I needed right now, but then this series is always just what I need and want. Murder in All Fury will be out in the fall, thank god fastin'. I don’t want to discourage anyone from jumping in on this 15th book, but I hope that if you’re just finding this amazing series you begin at the beginning. You really don’t want to miss a thing. So, kudos to Anne Cleeland for another thrilling read.

*Michael’s surname is Sinclair, but he is referred to his titled name, Sir Acton. The people in the Met he works closely with refer to him as Acton. His wife, Kathleen Doyle, uses both Acton and Michael.